But the green economy is also raising the demand for some mechanical skills, such as equipment maintenance and repairing, which have diminished in importance in recent decades as the number of U.S. manufacturing jobs declines. With its emphasis on the environment and the sustainable use of resources, the green economy has stimulated employment in existing engineering and production jobs, ranging from industrial engineers to electricians, which often call for mechanical proficiency.

The American workplace has seen a rising need for high-skill workers in recent decades, driven in part by the emergence of new occupations in today’s economy. This analysis examines how the need for different skills varies across older, newer and green economy jobs.

The analysis is based on job skills data from the U.S. Department of Labor, Employment and Training Administration’s Occupational Information Network (O*NET), specifically Version 24.2, released February 2020. O*NET analysts rate the importance of 35 skills related to job performance in 967 occupations. For the purposes of some of this analysis, we grouped these into five major families of job skills: social, fundamental, analytical, managerial and mechanical. Occupational employment and wage data are from the U.S. Bureau of Labor Statistics, Occupational Employment Statistics program. For more information about the analysis, see the methodology section.

Amid these changes, the most valued skills in the American workplace fall into the category of “fundamental skills” – active listening, speaking, critical thinking and reading comprehension. The skill that is currently most in demand among employers is active listening, or the ability to give full attention, take the time to understand, ask questions and not interrupt at inopportune times. 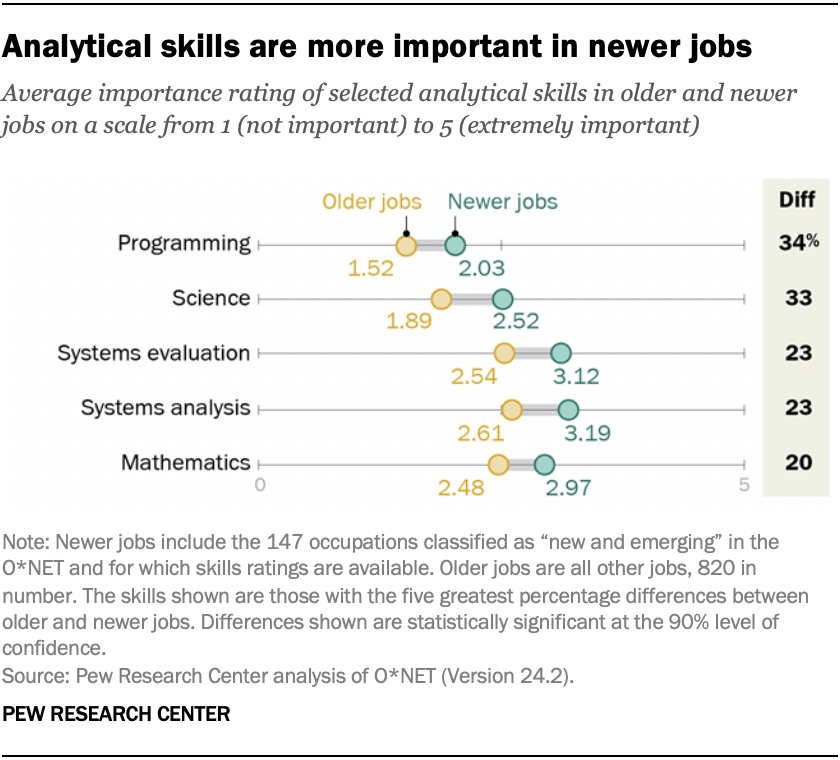 The U.S. Department of Labor, Employment and Training Administration’s Occupational Information Network (O*NET) provides ratings on the importance of 35 detailed job skills. These skills, grouped into five major families of job skills, are as follows:

The grouping is similar to the O*NET classification of skill categories. In general terms, social skills refer to interpersonal skills, fundamental skills lay the foundation for acquiring other skills, analytical skills capture scientific and technological prowess, managerial skills pertain to the management of people, things and finances, and mechanical skills describe the ability to work with and to control machinery or equipment. See an earlier Pew Research Center report for a more detailed analysis of job skills and the jobs that need them the most (or least).

(O*NET assesses the importance of 35 job skills on a scale of one, not important, to five, extremely important. Among the 967 occupations listed in the O*NET, some 147 are classified as “new and emerging.” See text boxes for details.)

A key feature of the modern-day economy is the focus on activities devoted to curbing pollution and greenhouse gas emissions, economizing on fossil fuels and using more renewable sources, increasing energy efficiency, and recycling. Collectively labeled the “green economy,” these activities give birth to new lines of work. They also either raise the demand for workers in existing occupations or change the skill requirements of some occupations. 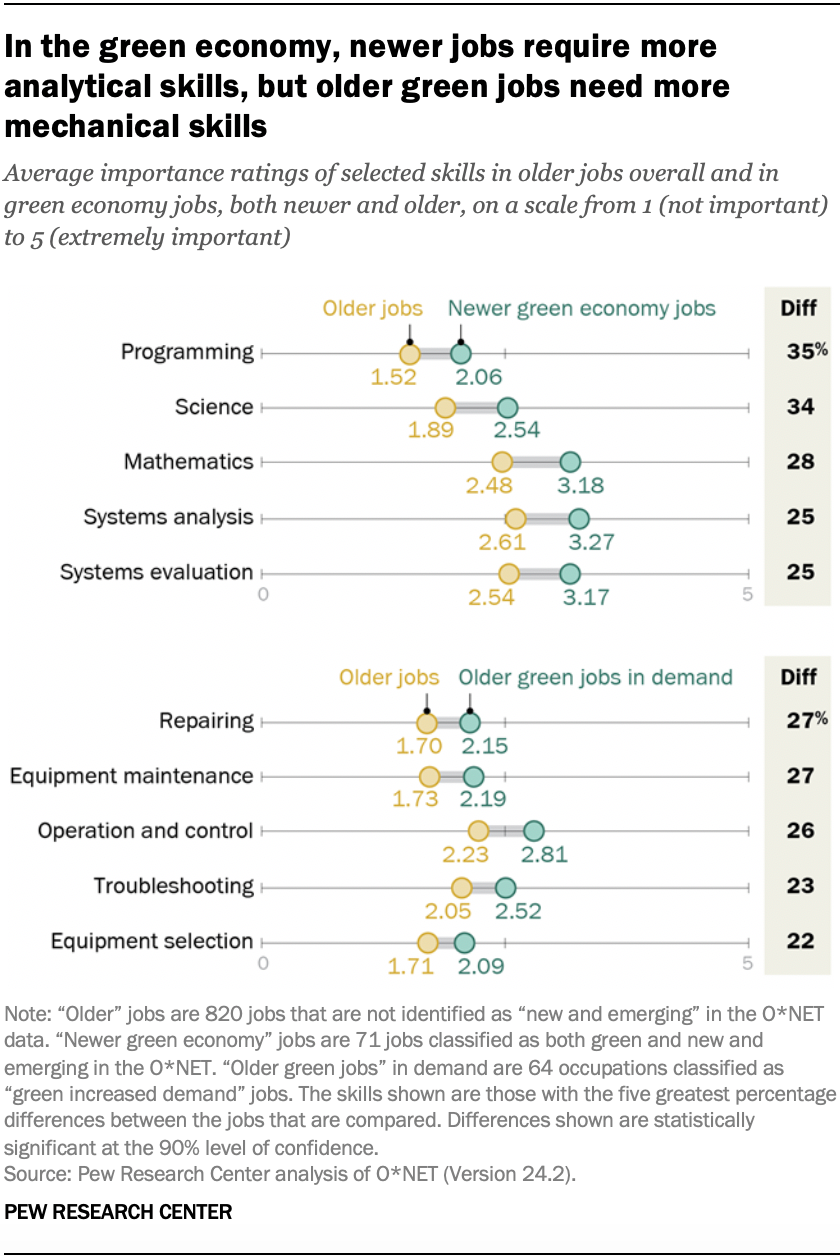 Older green jobs are significantly more likely to require greater proficiency in the following mechanical skills: repairing, equipment maintenance, operation and control, troubleshooting and equipment selection. Compared with older jobs overall, the average importance of these skills is higher by upwards of 22% in older green jobs that are in increased demand.

Our analysis estimates that the 199 occupations listed as “green occupations” in the O*NET, whether older or newer, employed from 31 million to 34 million workers in 2018. This represents about 21% to 24% of overall U.S. employment of 145 million in 2018. Green occupations also paid better than average in 2018: about $30 per hour compared with $25 per hour across all jobs, roughly 20% more as expressed in 2018 dollars.

Across all jobs, fundamental skills are most in need, mechanical skills the least

Looking across the American workplace overall, the most valued skills are fundamental skills. Among the 35 skills evaluated in the O*NET, the top four are fundamental in nature – active listening, speaking, critical thinking and reading comprehension. Rounding off the list of the top five skills is monitoring, a social skill pertaining to the assessment of performance in order to make improvements.

The bottom rung of the skills ladder in the labor market features a cluster of mechanical skills, namely equipment selection, equipment maintenance, repairing and installation. These skills may be extremely important in some occupations, but they are not in widespread use. For example, installation is extremely important for solar thermal installers and technicians, but it rates important or higher in only 22 occupations.

Programming, an analytical skill, also appears on the lowest rung. Although it is a higher-order computer skill in demand in newer jobs, it is in limited use in the labor market overall. There are only five occupations, including computer programmers, in which programming rates very important to extremely important in 2020. On the other hand, programming is rated not important in 163 occupations.

Even as newer and greener occupations prioritize analytical skills and revive the need for mechanical skills in some cases, they share one essential trait with older occupations. Regardless of which group of occupations is examined, active listening, speaking, critical thinking and reading comprehension feature at the top of the list of skills ratings. In other words, preparation in fundamental skills remains the common currency in the workplace.

This analysis is based on information from the O*NET 24.2 Database by the U.S. Department of Labor, Employment and Training Administration (USDOL/ETA), released February 2020. Used under the CC BY 4.0 license, O*NET is a trademark of USDOL/ETA.

Among other things, O*NET includes information on 35 specific skills representing attributes of workers related to work performance. Each skill is rated on a scale of one to five measuring its importance to job performance, from not important to extremely important. This analysis focuses on the importance ratings of the 35 job skills in the O*NET data. The ratings are based on information generated by trained job analysts.

Version 24.2 of the O*NET contains importance ratings of skills for 968 occupations (at the eight-digit level of classification). One occupation – mathematical technicians – was dropped because it was last evaluated prior to 2002. The importance ratings for the remaining 967 occupations were developed by analysts on a rolling basis from 2010 to 2019, with about 10% or slightly more occupations rated in most years.

Employment and wage estimates for green jobs are based on the matching of O*NET data to data from the U.S. Bureau of Labor Statistics, Occupational Employment Statistics (OES) program. In some cases, the match is exact. For example, fish and game wardens, a green occupation in increased demand, is uniquely identified in both the O*NET and OES data. In other cases, the matching is imperfect. For example, environmental economists are not uniquely identified in OES data. Their employment and wages are represented by the estimates for economists overall. For this reason, employment and wage estimates for green jobs overall are presented as a range. The lower bound estimate of employment in green occupations – 30.7 million – excludes occupations with imperfect matches, such as environmental economists. The upper bound estimate of employment – 34.5 million – includes these occupations, for example using the employment of economists overall to represent the employment of environmental economists. The average hourly wage in green occupations, depending on whether imperfectly matched occupations are included, ranges from $29.88 to $30.53.

It was not possible to estimate employment and wages for new and emerging jobs overall because of a much lower matching rate between O*NET and OES data.

Key findings on gains made by women amid a rising demand for skilled workers
The share of immigrant workers in high-skill jobs is rising in the U.S.
Jobs requiring preparation, social skills or both expected to grow most
Key findings about the American workforce and the changing job market
Reshaping the workplace: Tech-related jobs that didn't exist (officially, at least) 15 years ago