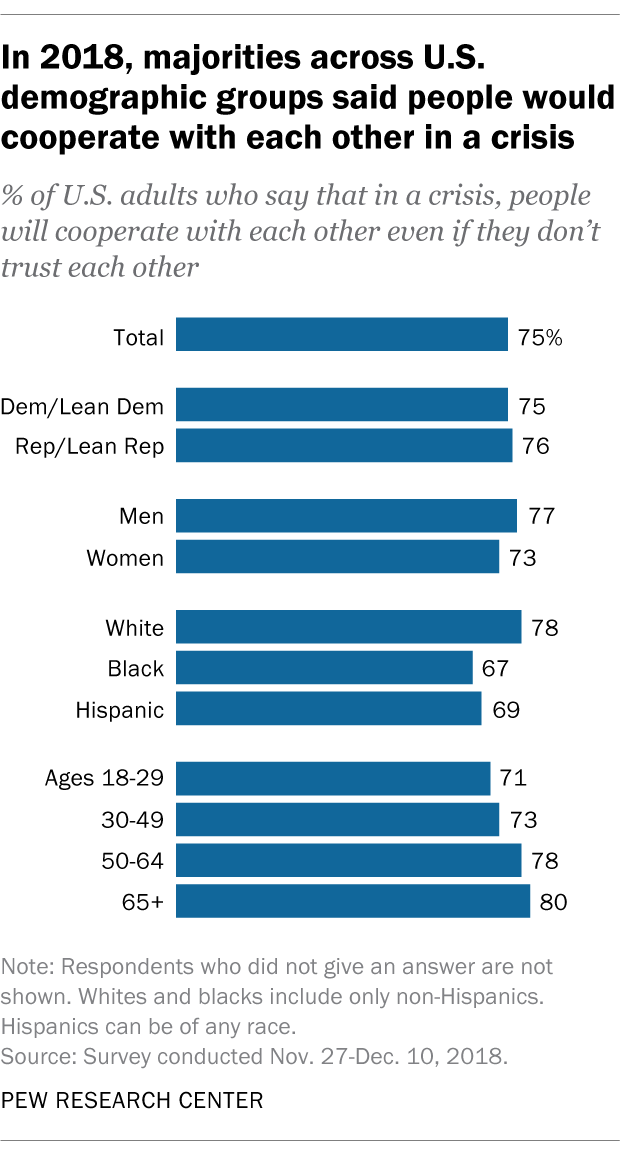 Cooperating in a time of a crisis has taken on new urgency as federal, state and local government leaders urge Americans to stay at home, practice “social distancing” and take other steps to prevent the spread of COVID-19. (It’s important to note that respondents to the 2018 survey may have been focusing more on how Americans might actively assist those in need during a crisis, rather than steering clear of others to avoid spreading a virus.)

As the United States copes with the public health and economic fallout of the coronavirus, we revisited the findings of a late 2018 Pew Research Center survey about Americans and trust. The survey was conducted Nov. 27-Dec. 10, 2018, among 10,618 U.S. adults.

The survey found no partisan differences when it comes to how the public expects Americans might behave in a crisis. Around three-quarters of Republicans and GOP-leaning independents (76%) as well as Democrats and Democratic leaners (75%) said people would cooperate with each other, even if they didn’t trust each other. By contrast, partisans were divided on many other questions related to public trust, including the confidence they place in key institutions and societal actors, from presidential appointees and career government officials to journalists.

The trust that majorities of Americans said they have each other in times of crisis generally held true across demographic groups. But there were some differences by income and education level, race and ethnicity, and age. For example, 81% of those in households earning $75,000 a year or more said people would cooperate with each other in a crisis, compared with around two-thirds (68%) of those in households earning less than $30,000 a year.

White adults (78%) were more likely than black (67%) and Hispanic (69%) adults to say people would cooperate with each in other in a time of crisis. And while eight-in-ten Americans ages 65 and older said people would cooperate with each other in a crisis, a slightly smaller share (71%) of those ages 18 to 29 said this. This reflects a broader pattern of young adults expressing less trust than their elders in other people and key institutions.

The survey also found divisions based on people’s overall levels of interpersonal trust – that is, whether people are “high trusters” (22% of all U.S. adults) “medium trusters” (41% of adults) or “low trusters” (35% of the public). Among those classified in the study as high trusters, 85% said people would cooperate with one another in a time of crisis, even if they didn’t trust each other. The share fell to 78% among those classified as “medium trusters” and 65% among those deemed “low trusters.” (You can read more here about how respondents were placed in one of these trust groups.)