Note: A version of this post with more recent data can be found here.

The current level of support for eliminating the Electoral College is nearly the same as in 2011, when 62% favored amending the Constitution. However, partisans’ attitudes on this question have grown further apart since the 2016 election, with Republicans becoming more supportive of the current system.

In two of the five most recent U.S. presidential elections, the winner of the popular vote has lost the election after receiving fewer votes in the Electoral College. In order to continue tracking how the public views our system of deciding presidential elections in the lead-up to the 2020 election, we surveyed 12,638 U.S. adults in January 2020. Everyone who took part is a member of Pew Research Center’s American Trends Panel (ATP), an online survey panel that is recruited through national, random sampling of residential addresses. This way nearly all U.S. adults have a chance of selection. The survey is weighted to be representative of the U.S. adult population by gender, race, ethnicity, partisan affiliation, education and other categories.

In 2011, about half of Republicans and independents who lean toward the Republican Party (51%) said the Constitution should be amended. Today, nearly two-thirds prefer to keep the current system, a figure that is essentially unchanged over the past two years.

See also: Trump’s victory another example of how Electoral College wins are bigger than popular vote ones

Among Democrats and Democratic leaners, 81% now say the Constitution should be amended, modestly higher than in other recent years. 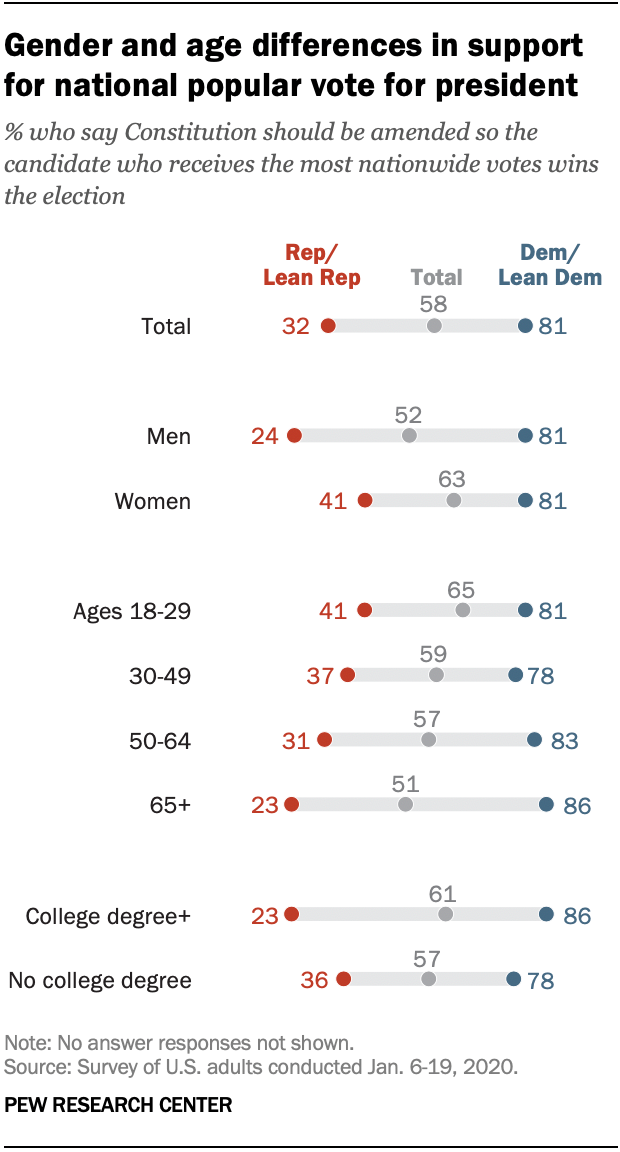 Women and younger adults are more likely than men or older adults to support amending the Constitution so the candidate who receives the most votes wins the presidency. About six-in-ten women (63%) say the Constitution should be amended so the candidate with the most votes wins the presidency, compared with 52% of men. And while 65% of those ages 18 to 29 support having the popular vote winner become president, the share falls to 51% among those ages 65 and older.

Gender and age differences in these views are more pronounced among Republicans than Democrats. For example, 41% of Republican women favor amending the Constitution so the winner of the popular vote becomes president, compared with 24% of GOP men. 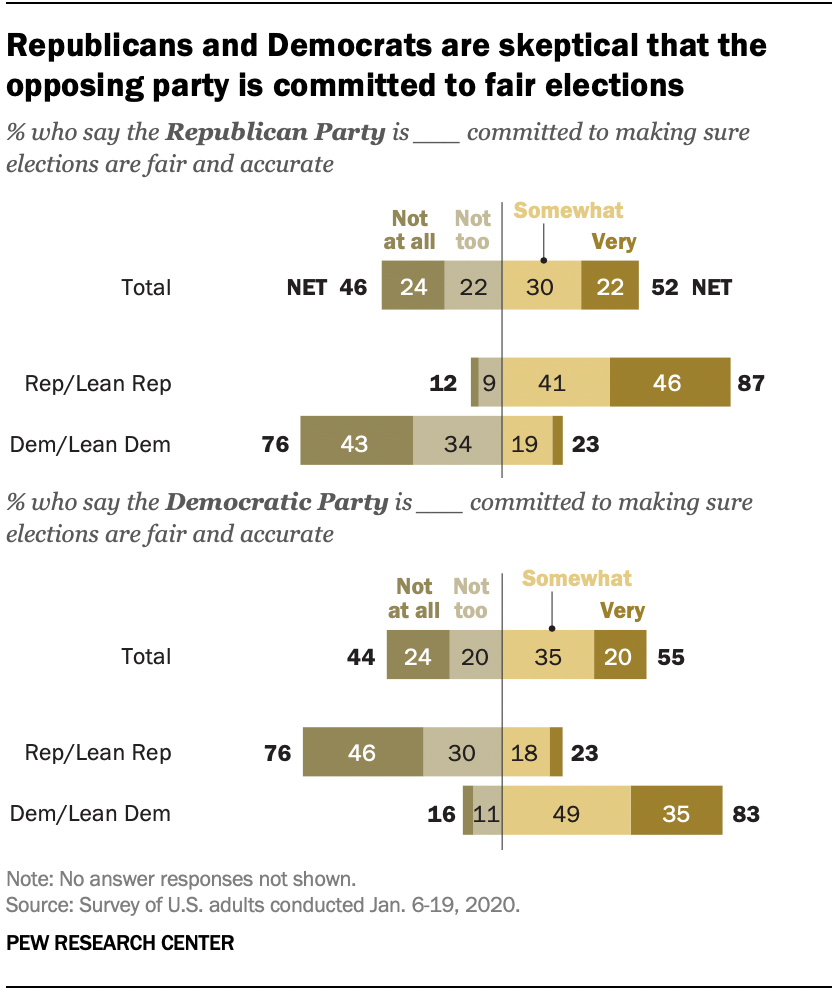 In addition to having starkly different views about how presidential elections should be conducted, Republicans and Democrats both express low levels of confidence in the other party’s commitment to ensuring fair and accurate elections in the United States.

A similar proportion of adults (55%) say the Democratic Party is very or somewhat committed to fair elections, with only 20% saying the party is very committed.

Large majorities of both Republicans (87%) and Democrats (83%) have confidence that their own party is committed to fair elections. And equally small shares – 23% in each party – are confident that the opposing party shares this commitment.

Results for this report are from a survey conducted through Pew Research Center’s American Trends Panel – a probability-based, nationally representative panel of U.S. adults administered online. The question regarding the Electoral College on this survey has been included on telephone surveys in the past.

Results from self-administered (online) and interviewer-administered (telephone) surveys are sometimes different even when the questions are worded the same. This difference is called a mode effect.

To assess possible mode effects, this question was included on a recent telephone survey in addition to this wave of the American Trends Panel. The two surveys produced similar estimates for attitudes about the Electoral College. Results for both surveys are shown in the topline.

Charts in the report that draw upon trend data from telephone surveys include footnotes indicating the mode of data collection. For more information about mode effects, click here.