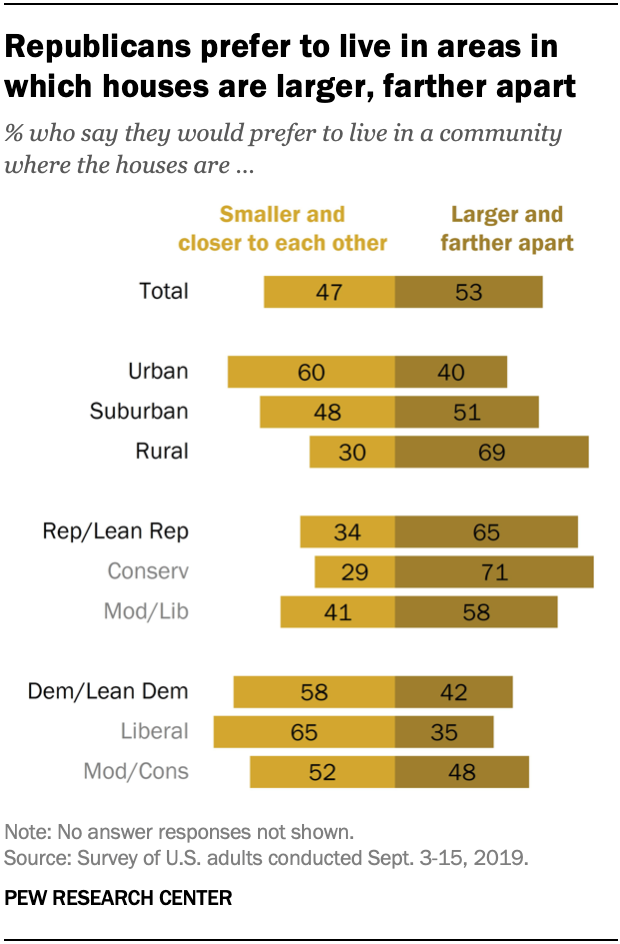 By contrast, a majority of Democrats and Democratic leaners (58%) would rather live in a community in which houses are smaller and closer to each other, but schools, stores and restaurants are in walking distance.

The ideological differences in community preferences are stark, according to a Pew Research Center survey conducted in September among 9,895 U.S. adults. Conservative Republicans are about twice as likely as liberal Democrats to prefer a community where the houses are larger and more widely spaced (71% vs. 35%). These overall patterns of opinion are little changed from 2017.

This analysis updates findings from a question we first asked in our 2014 polarization report. Since 2014, we have documented even greater levels of polarization along partisan lines in political values, which issues should be prioritized and views of the economy (to name just a few). The fact that we see such a wide political divide on this question is indicative of how deep and enduring partisan divides in the country have become – spreading to even such seemingly nonpolitical realms as the kinds of communities people say they would prefer to live in.

In this post, we extend the analysis beyond what we had done previously to look at how these views differ by the kinds of communities in which people live. These community descriptions come from respondents’ self-reports (for more on why we prefer this approach, see this report).

This analysis uses responses from a survey of U.S. adults who are members of Pew Research Center’s American Trends Panel (ATP), an online panel that is recruited through national, random sampling of residential addresses. Recruiting our panelists by phone or mail ensures that nearly all U.S. adults have a chance of selection. This gives us confidence that any sample can represent the whole population (see our Methods 101 explainer on random sampling). To further ensure that each survey reflects a balanced cross-section of the nation, the data is weighted to match the U.S. adult population by gender, race, ethnicity, partisan affiliation, education and other categories.

A majority of rural residents (69%) say they would rather live in a community with larger houses that are farther apart, while 60% of urban residents prefer communities with small houses. People who live in suburbs are more evenly divided. 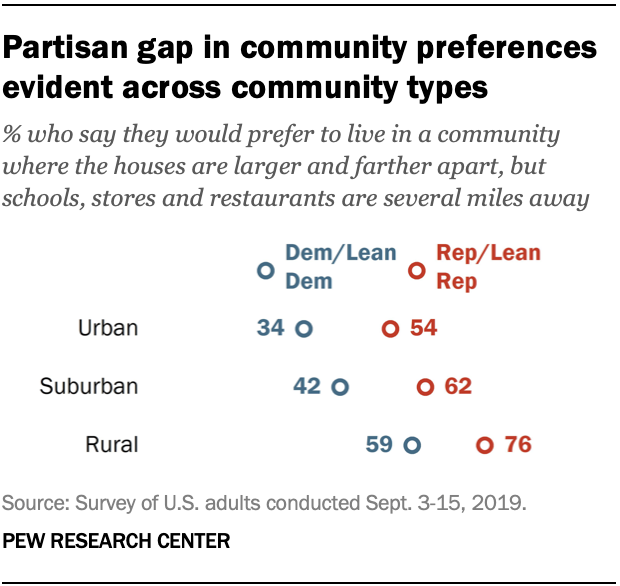 The party gap in community preferences is evident even controlling for where people actually live. Among urban, suburban and rural residents, Republicans are significantly more likely than Democrats to express a preference for larger houses in more widely spaced communities.

When asked about important factors for choosing a community, Americans almost universally agree that it is important to live in a good place to raise children (90% say this is very or somewhat important).

A majority (64%) also says that it is important to live in a place that is racially and ethnically diverse.

Smaller shares say that it is important to live in communities where most other people share their political (41%) or religious (33%) values.

There is bipartisan agreement on the importance of a community being a good place to raise children; 92% of Republicans and 87% of Democrats say this is very or somewhat important. 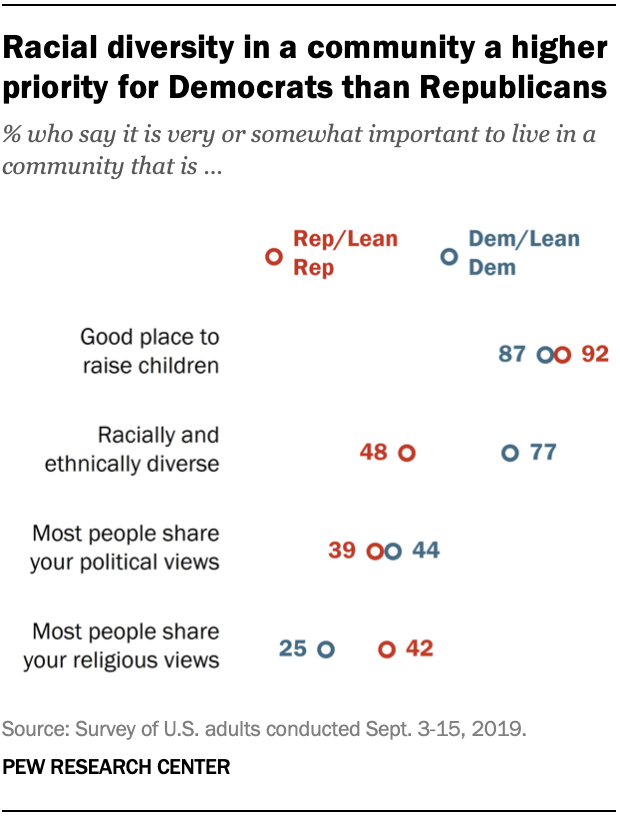 Nearly half of conservative Republicans (47%) say it is very or somewhat important to live in a community where most people share their political views; only 27% of moderate and liberal Republicans say the same. Among Democrats, a higher share of liberals (53%) than conservatives and moderates (37%) place importance on living in a community where most share their political views.