The political views and primary candidate preferences of Democrats on Twitter differ from those who are not on the platform, according to a Pew Research Center survey conducted in January. 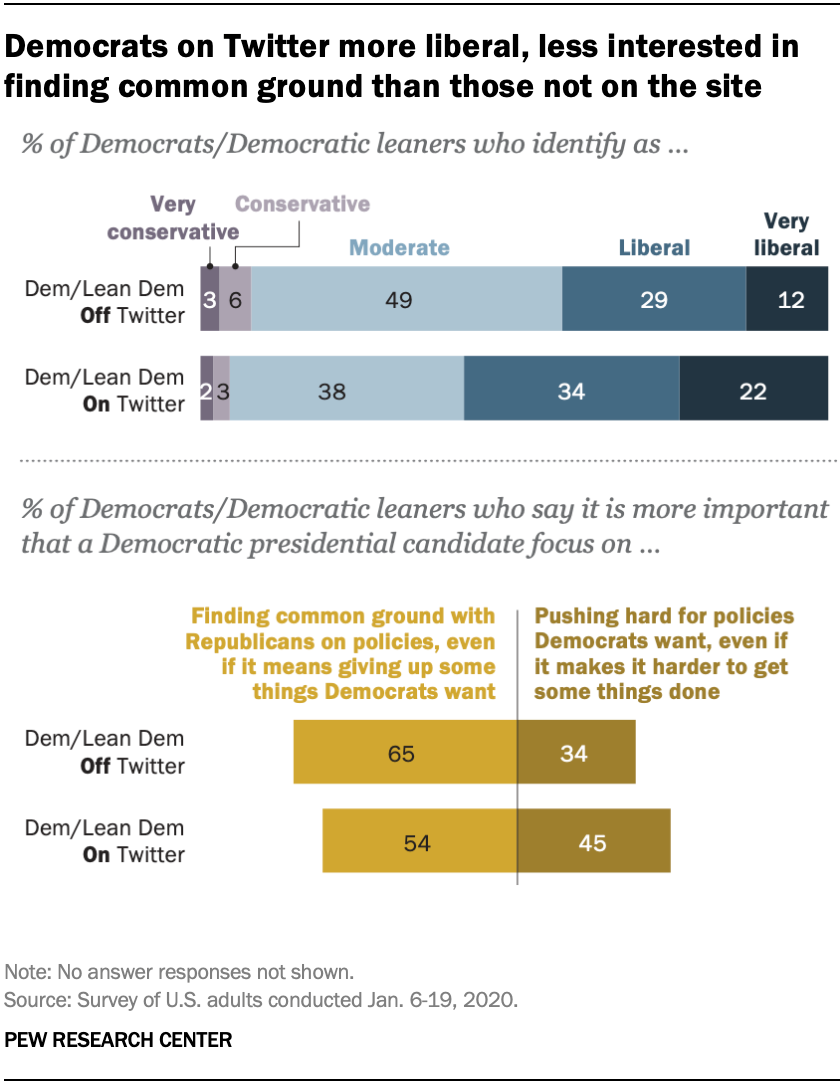 The 29% of Democrats who use the platform are more liberal and less inclined to say the party should elect a candidate who seeks common ground with Republicans than are Democrats who are not on Twitter. They also express different preferences for who should be party’s 2020 nominee.

A 56% majority of Democrats and Democratic-leaning independents who use Twitter describe their political views as liberal or very liberal. This share is substantially larger than the 41% of non-Twitter Democrats who describe themselves in this way.

Differences between Democrats on and off Twitter extend beyond ideology. About two-thirds of Democrats who do not use Twitter (65%) say it is more important for a Democratic candidate to seek common ground with Republicans, even if it means giving up some things Democrats want. A smaller share of Twitter-using Democrats (54%) take this view; 45% prefer a candidate who will push hard for policies Democrats want, even if it makes it much harder to get some things done.

In addition to these attitudinal gaps, preferences for who should be the party’s 2020 nominee differ between those who are on Twitter and those who are not. Democrats on Twitter are 11 points less likely to name Joe Biden as their first choice for the nomination than Democrats who are not on Twitter. By contrast, candidates such as Elizabeth Warren (+8) and Bernie Sanders (+7) receive higher levels of support among Twitter-using Democrats than among those who are not Twitter users. For Biden and Warren, differences in support between Twitter users and non-users hold even after accounting for factors such as age, education and political ideology.

Sanders does particularly well among Democrats on Twitter who say they are not registered to vote or are unsure of their registration status: 40% in this group name Sanders as their first choice for the nomination. Similarly, Yang’s support among unregistered Democrats who use Twitter is 10 points higher than it is among those who don’t use the platform.

For this report, we surveyed 12,638 U.S. adults in January 2020 and matched those responses to a separate survey conducted in October and November of 2019 in which each respondent was asked if they use Twitter. The resulting dataset contains a total of 6,077 Democrats and Democratic leaners and includes information about these respondents’ political attitudes and opinions (from the 2020 survey) and whether they use Twitter (from the 2019 survey).

In addition to capturing their survey responses, we also asked the Twitter users in our survey if they would be willing to share their Twitter handle for research purposes. A total of 811 Democrats and Democratic leaners provided a valid, public handle, which we then used to calculate the share of Democrats on Twitter who follow the different primary candidates and other prominent political figures.

Everyone who took part in these surveys is a member of Pew Research Center’s American Trends Panel (ATP), an online survey panel that is recruited through national, random sampling of residential addresses. This way nearly all U.S. adults have a chance of selection. The survey is weighted to be representative of the U.S. adult population by gender, race, ethnicity, partisan affiliation, education and other categories. Read more about the ATP’s methodology and the methodology for this report. 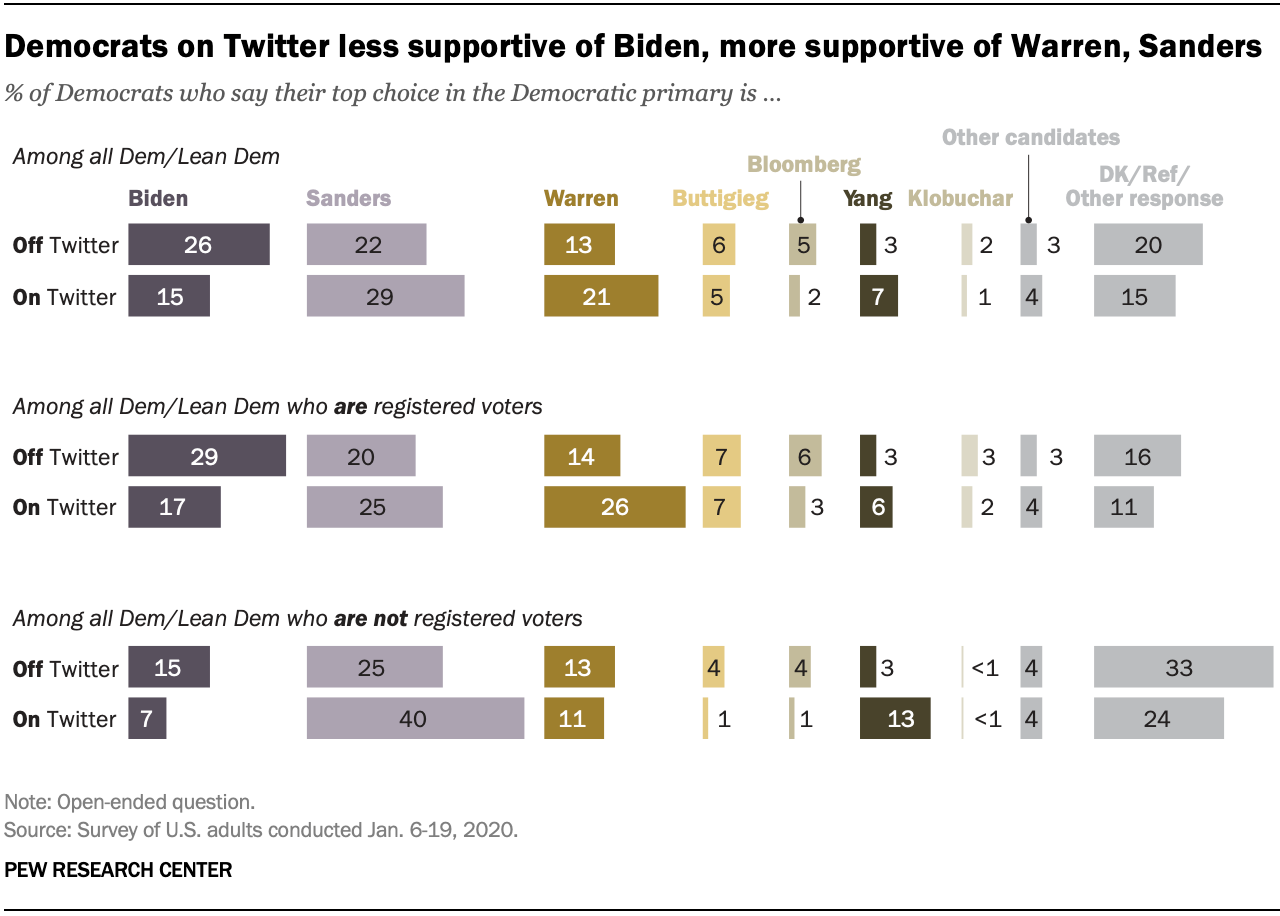 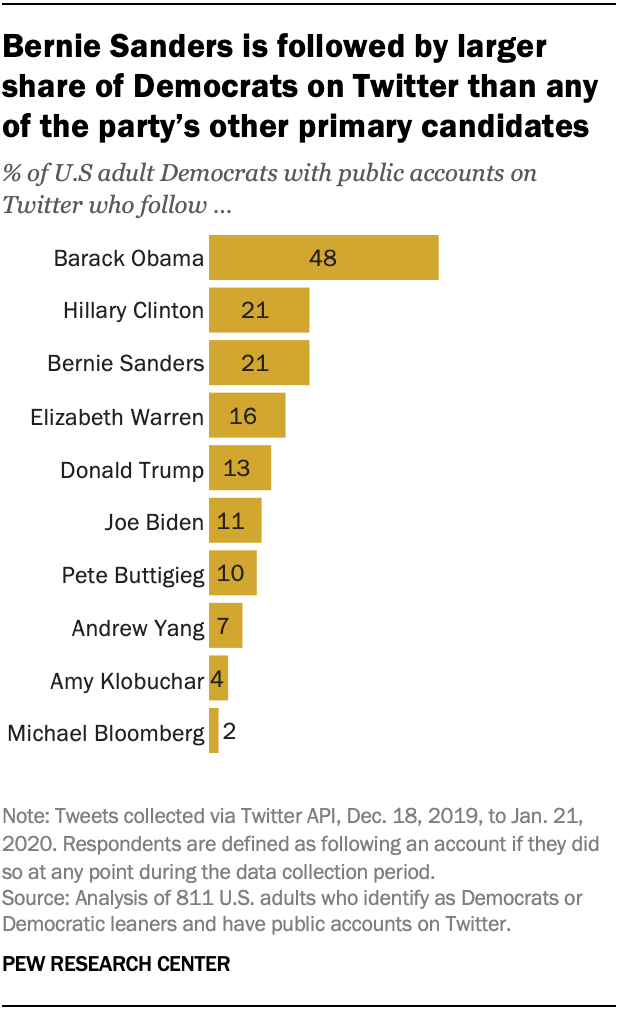 Along with measuring Democrats’ attitudes and candidate preferences, the Center also examined the Twitter profiles of a representative sample of U.S. adult Democrats who had volunteered their Twitter handles to measure their online activities and behaviors – specifically the share who follow various candidates and elected officials.

Former president Barack Obama remains the most-followed major political figure within this group, followed by some 48% of Democrats on Twitter. Hillary Clinton is followed by about one-in-five Democrats on Twitter (21%), while 13% follow Donald Trump – comparable to the share who follow many of the current Democratic primary candidates.