A majority of Americans say it is acceptable for professional athletes to speak out publicly about political issues, and relatively few say it’s important that the athletes they support share their political views, according to a new Pew Research Center survey.

The survey was conducted among members of the Center’s American Trends Panel in September – just before a controversy surrounding a pro-Hong Kong tweet posted by the general manager of the Houston Rockets and a response from NBA superstar LeBron James. It comes against a larger backdrop of prominent American athletes weighing in on political issues, from some NFL players refusing to stand for the national anthem because of concerns about the treatment of minorities in the United States to members of championship-winning teams declining to visit the White House because of differences with President Donald Trump. 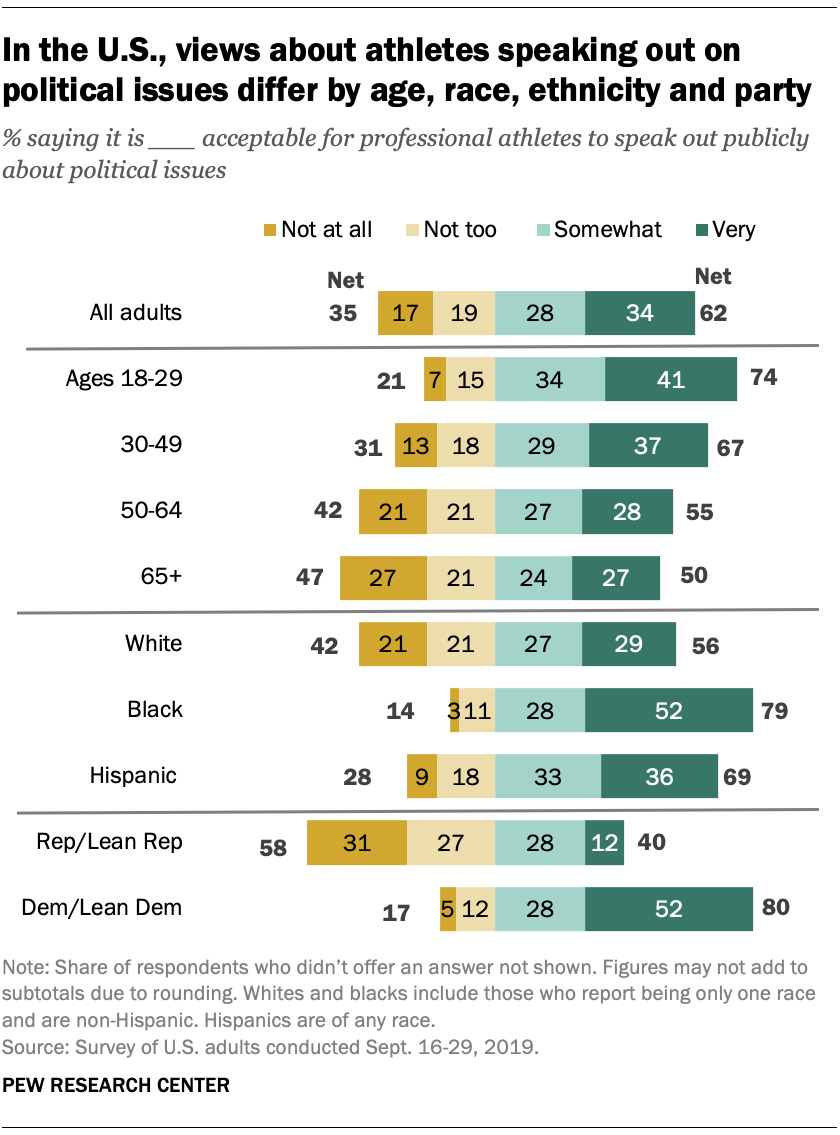 Overall, about six-in-ten U.S. adults (62%) say it’s very or somewhat acceptable for professional athletes to speak out publicly about political issues, while 35% say this is not too or not at all acceptable. But these views differ by age, race and ethnicity – and especially political affiliation.

About three-quarters (74%) of adults ages 18 to 29 say it is very or somewhat acceptable for professional athletes to speak out publicly about politics. By comparison, 67% of adults ages 30 to 49, 55% of those ages 50 to 64 and half of those 65 and older say this.

Racial and ethnic minorities are more likely than white Americans to say it’s acceptable for professional athletes to address political issues in public. Roughly eight-in-ten black Americans (79%) say this is at least somewhat acceptable, including about half (52%) who say it is very acceptable. Among Hispanics, 69% say it’s very or somewhat acceptable for athletes to talk about politics, while a narrower majority of white adults (56%) say the same.

There are sharp partisan differences in these views. While eight-in-ten Democrats and Democratic-leaning independents say it is very or somewhat acceptable for professional athletes to speak out about politics, a majority of Republicans and Republican leaners (58%) say this is not too or not at all acceptable. Many Democrats and Republicans feel strongly about the issue: About half of Democrats (52%) say it is very acceptable for professional athletes to speak out in this way, while about a third of Republicans (31%) say this is not at all acceptable.

While Americans generally voice support for professional athletes speaking out publicly about politics, they do not believe it is important for the pro athletes they support to share their political views. Only 22% of U.S. adults say this is very or somewhat important, while 52% say it is not too or not at all important. (A quarter of respondents say they do not follow professional sports.) 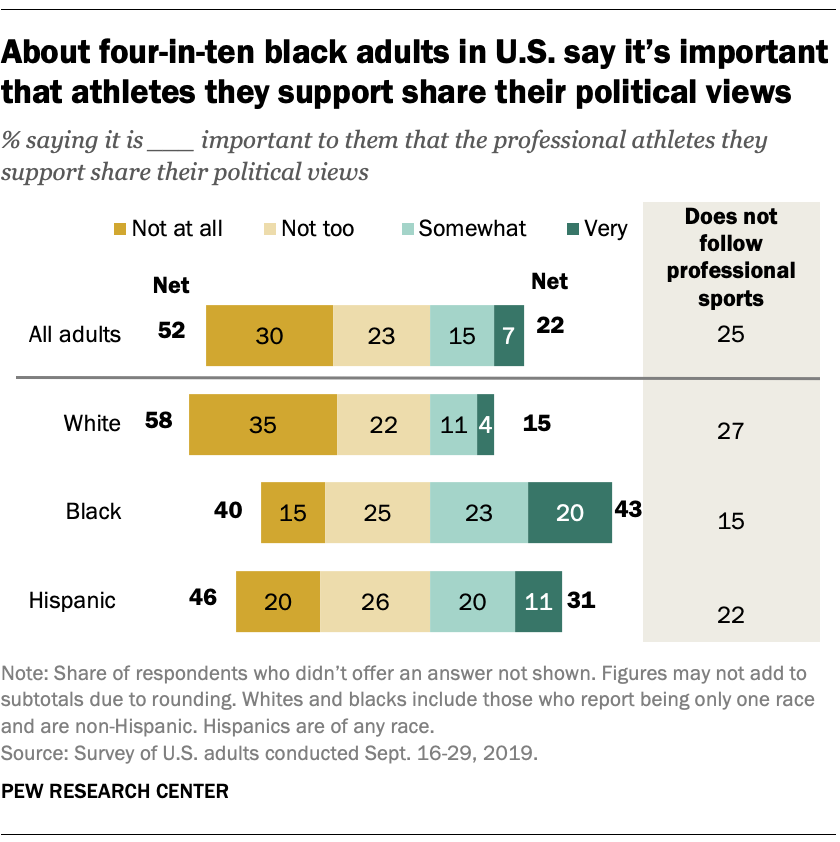 There are again some differences in attitudes by demographic characteristics and political affiliation. For example, roughly four-in-ten black adults (43%) and about a third of Hispanic adults (31%) say it is very or somewhat important that the professional athletes they support share their political views, but just 15% of white adults hold this view. In contrast, a majority of white Americans (58%) say it’s not too or not at all important that professional athletes share their political views.

Many see negative effect on society from pro sports

On this question, too, there are notable differences by political affiliation, race and ethnicity, and age. Six-in-ten Democrats say pro sports are having a positive effect on society; 53% of Republicans see a negative effect.

The new survey is not the first time Pew Research Center has asked about the intersection of professional sports and politics in the United States. In a survey about a year ago, the Center asked Americans about the issue of NFL players kneeling during the national anthem as a protest. Overall, the public was divided: 47% approved of players kneeling during the anthem and 50% disapproved.

Like the new survey, the earlier poll found significant differences between younger and older Americans. About two-thirds (66%) of those ages 18 to 29 said they approved of athletes kneeling as a form of protest, compared with about half (51%) of those ages 30 to 49. Among those 50 and older, the balance of opinion was decidedly negative: 61% disapproved, while 36% approved.