In 1991, Pew Research Center’s predecessor organization, the Times Mirror Center for the People & the Press, conducted a groundbreaking survey in Europe shortly after the collapse of the Soviet Union. We returned to the same set of countries in 2009 to explore how public opinion had changed – and are doing so again today, with the release of a new survey that explores European attitudes three decades after the fall of the Berlin Wall in 1989.

Here are 10 key takeaways from the new survey, which was conducted from May 13 to Aug. 12, 2019, among 18,979 adults in 14 European Union member nations – plus Russia, Ukraine and the United States, for comparison purposes. 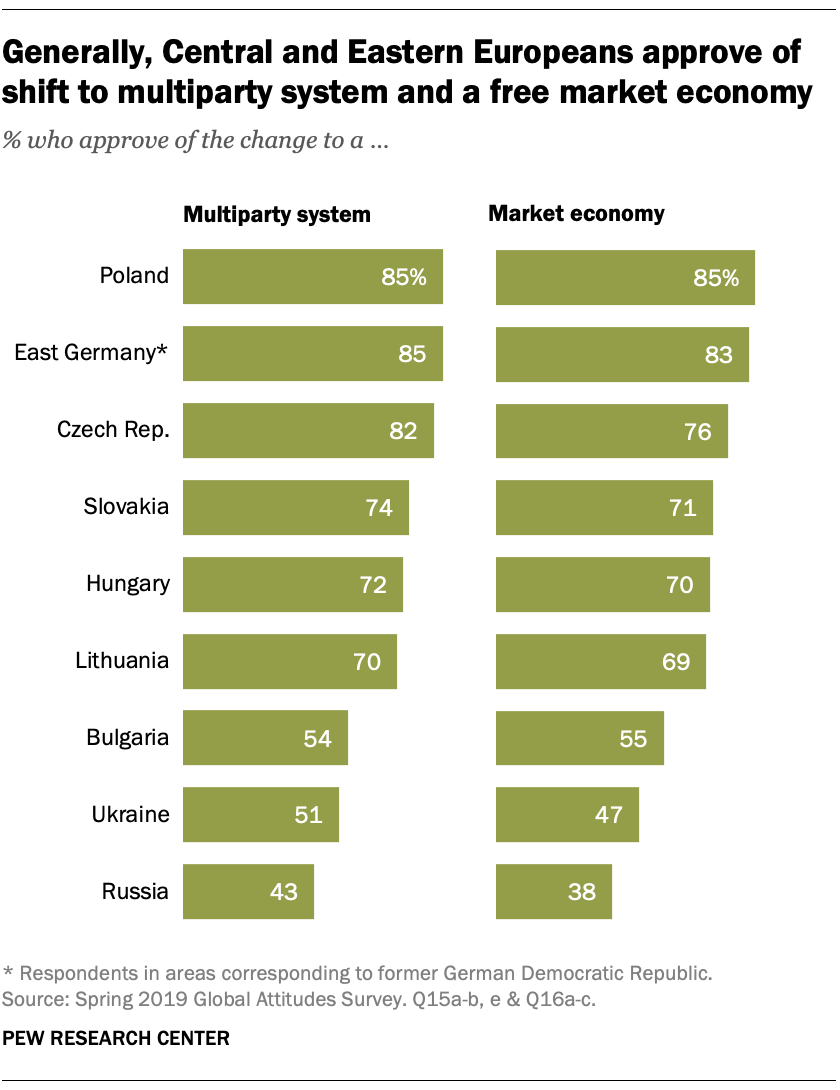 On balance, people across the former Soviet bloc nations approve of the changeover to a multiparty electoral system and free market economy. Majorities in Poland, the Czech Republic, Slovakia, Hungary, Lithuania and the area corresponding to former East Germany all rate these transitions favorably.

However, those in Russia are less likely to approve of the democratic and capitalist changeover. In fact, 63% of Russians agree it is a misfortune the Soviet Union no longer exists.

In Central and Eastern Europe, there have been dramatic increases in the shares of people who say the changes of the past 30 years or so have led to improved living standards. This is the case in all the former Soviet bloc countries surveyed in both 1991 and today. For example, in 1991, only 9% of Lithuanians said that the changes that had taken place by that point had a good influence on the standard of living in their country. This year, seven-in-ten in Lithuania say the changes had a positive influence on living standards.

On almost every aspect of life tested in 2019 – from education to national pride – people in the region today are generally convinced that the changes have had a good influence on their country. But fewer people across these countries think the changes have been good for family values, the state of health care and law and order compared with the other aspects tested.

3Across the board, Europeans are much more satisfied with their own lives than they were in 1991. The improvement has been especially dramatic in Central and Eastern European countries. For example, in 1991, only 12% in Poland rated their life satisfaction at 7 or higher on a 10-point scale. In the new survey, 56% rate their lives at 7 or higher. There has also been a dramatic increase in life satisfaction in Germany since 1991 – but much more so among people living in former East Germany than among those living in the former West. 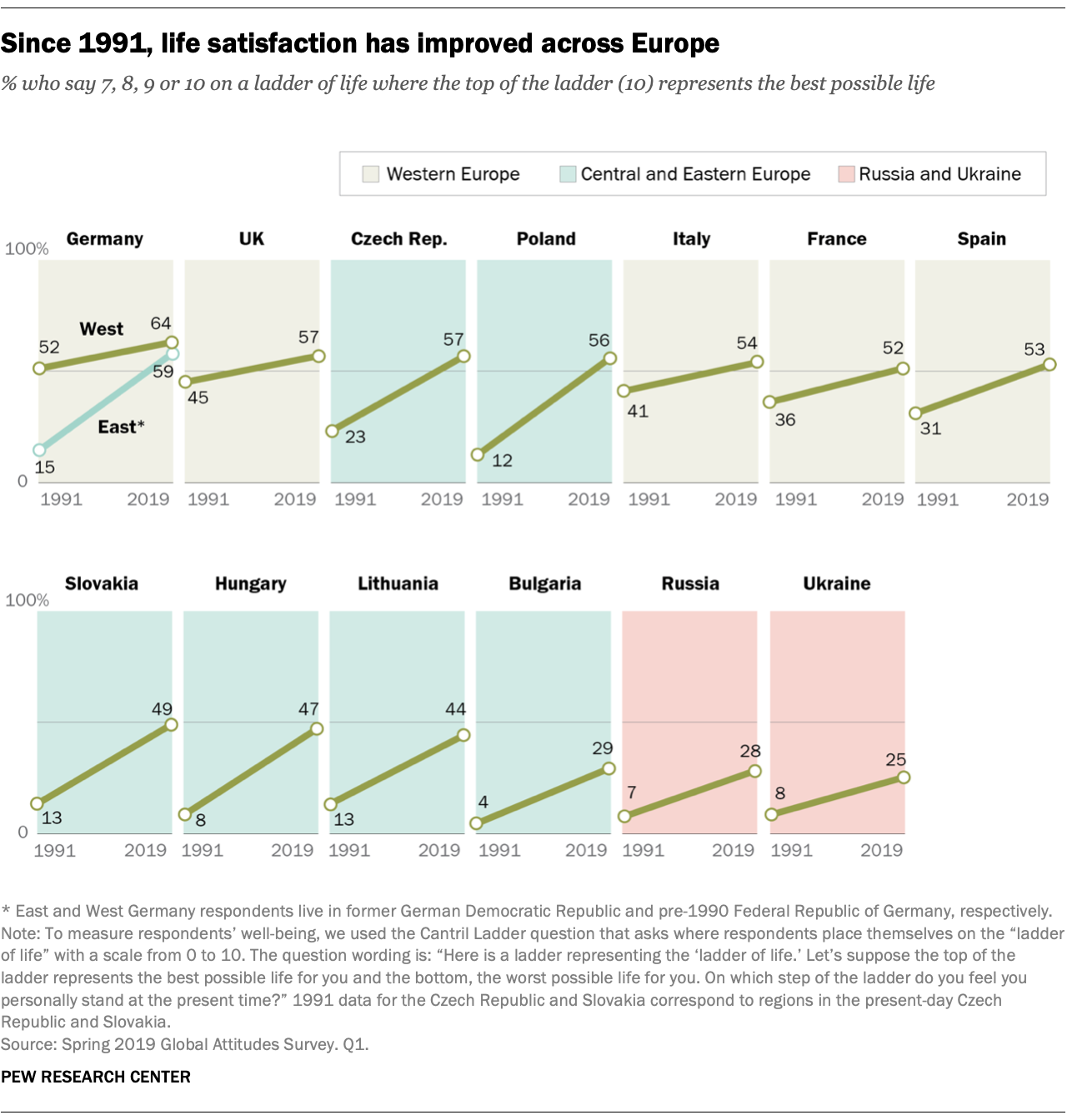 4Europeans today express strong support for democratic rights, including a fair judiciary, gender equality and free speech. A majority across all 14 EU countries surveyed say that these three features of liberal democracy are very important to have in their country. But the intensity of support is lower for other aspects of democracy, such as religious freedom and civil society. Support for democratic rights is generally higher in Western than in Eastern and Central Europe. Russians and Ukrainians support a fair judiciary and gender equality but are less supportive of having opposition parties operate freely. 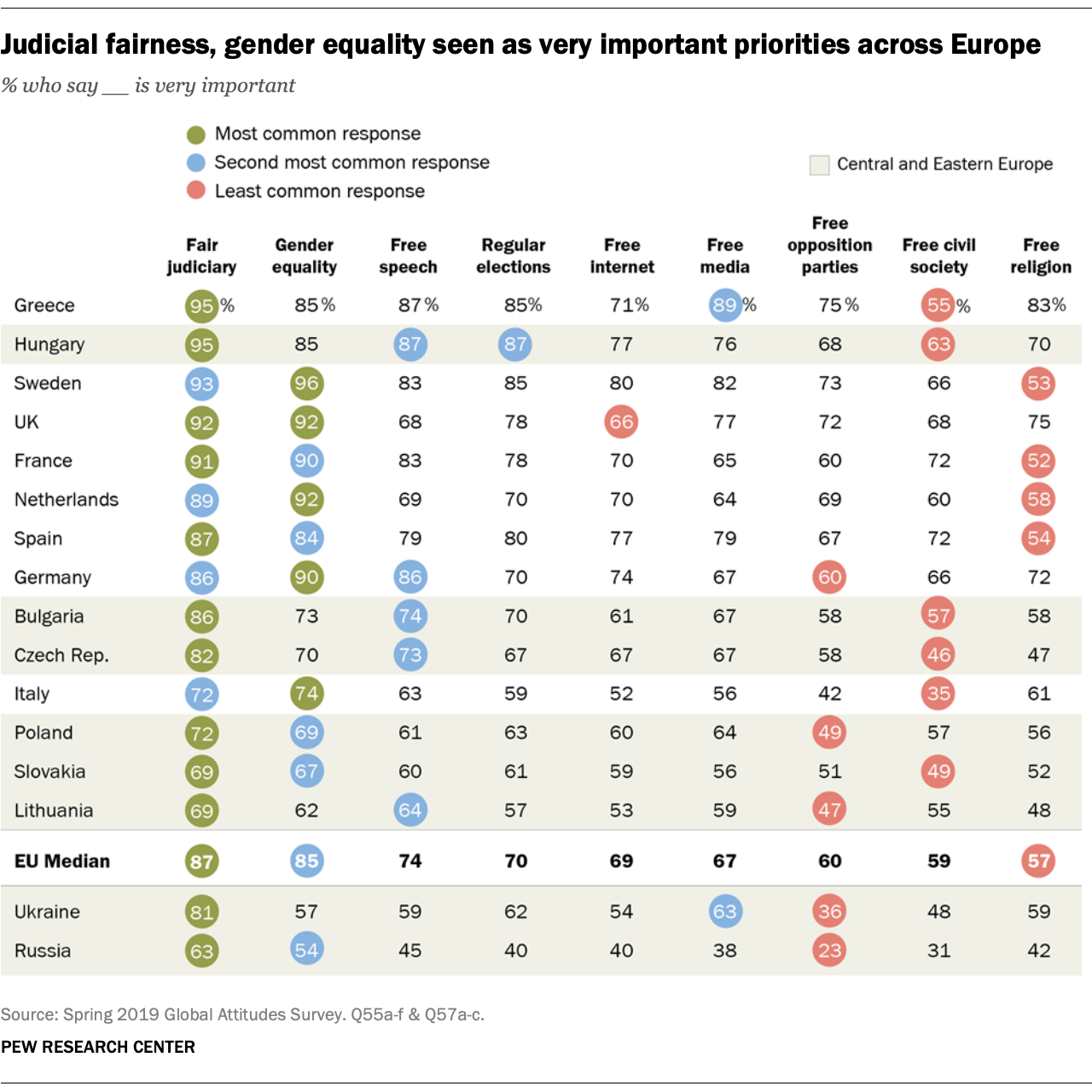 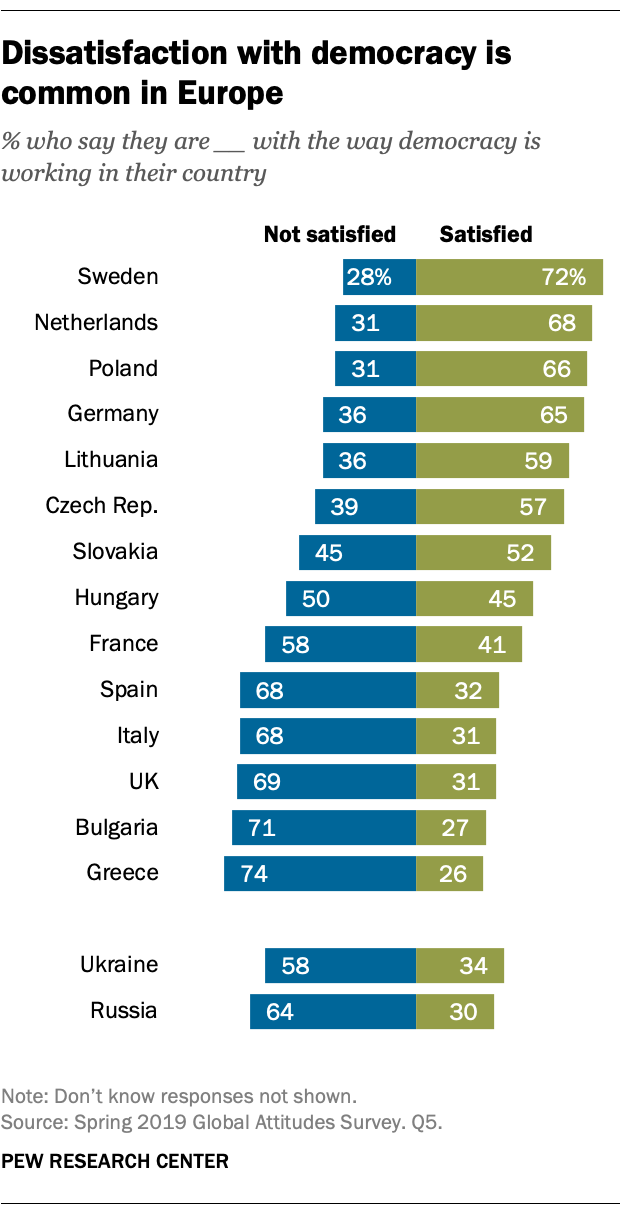 Many Europeans are dissatisfied with the way democracy is working, but there is considerable variation by country. Those living in Sweden are the most positive about the state of democracy in their country (72% satisfied). Majorities in the Netherlands, Poland, Germany, Lithuania and the Czech Republic are also satisfied.

On the other hand, roughly two-thirds or more in Greece, Bulgaria, the UK, Italy and Spain are not satisfied with the state of democracy in their country. Russians and Ukrainians are also less than happy with how democracy is working in their respective countries.

Most across Europe are skeptical that elected officials care what people like them think, but they also say that voting gives people a say in how government works.

6While public attitudes toward individual leaders are mixed, Europeans express the most confidence in Germany’s Angela Merkel. Across 14 EU countries, a median of 57% express confidence in Merkel’s ability to do the right thing regarding world affairs. Views of French President Emmanuel Macron are more mixed, while Russian President Vladimir Putin and Hungarian Prime Minister Viktor Orban get generally negative reviews from people on the continent. 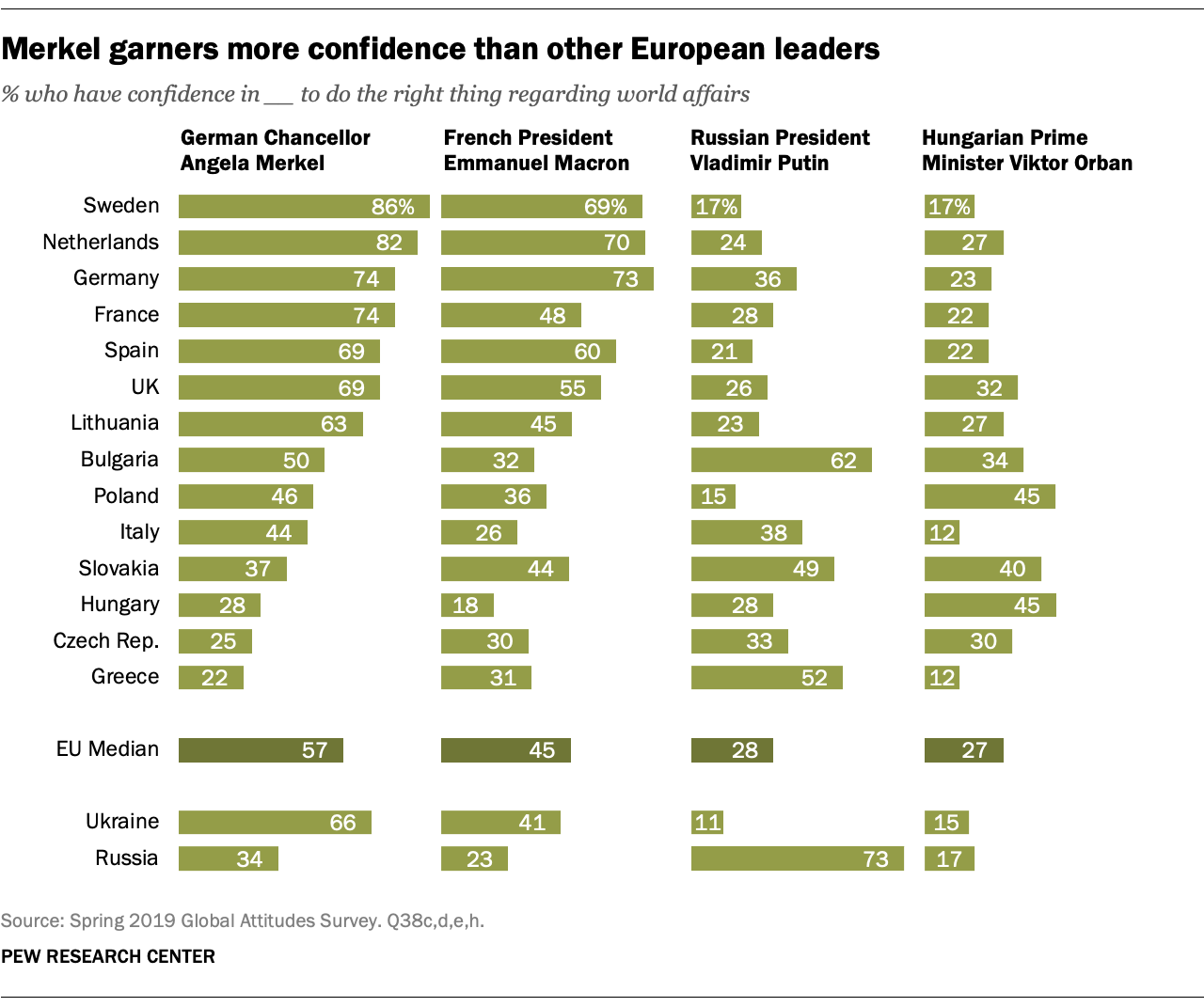 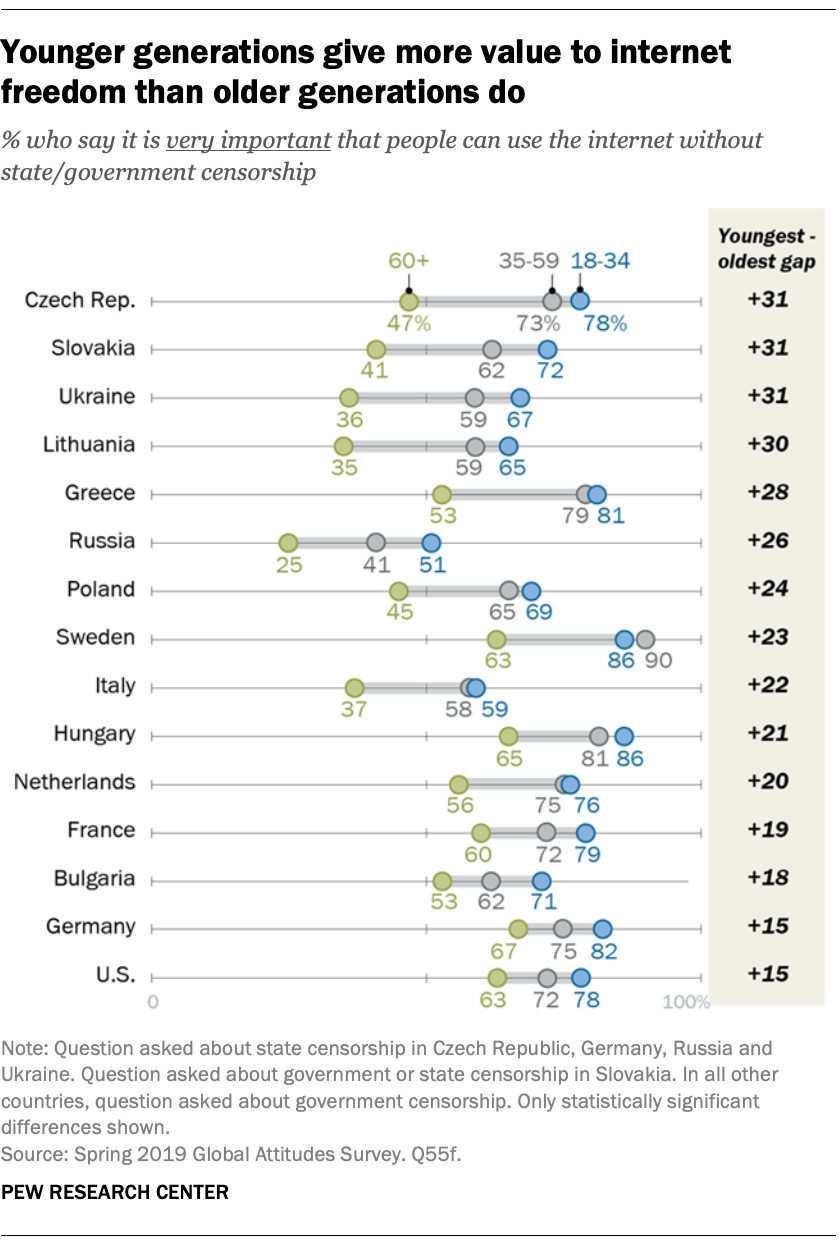 Young people across Europe differ from their elders on a number of key questions, including whether children in the future will be better off financially than their parents, whether they are satisfied with the overall direction of their country and whether they value the ability of people to use the internet without government censorship.

In almost every country surveyed, for example, people ages 18 to 34 are more likely than those 60 and older to say internet freedom is very important to them.

Western Europeans are more likely than those in Central and Eastern Europe to say homosexuality should be accepted by society. Across the countries surveyed, acceptance of homosexuality is highest in Sweden (94%) and lowest in Russia and Ukraine (14%).

Similarly, those in Western Europe tend to be more favorable toward Muslims and Roma than people in Central and Eastern Europe. 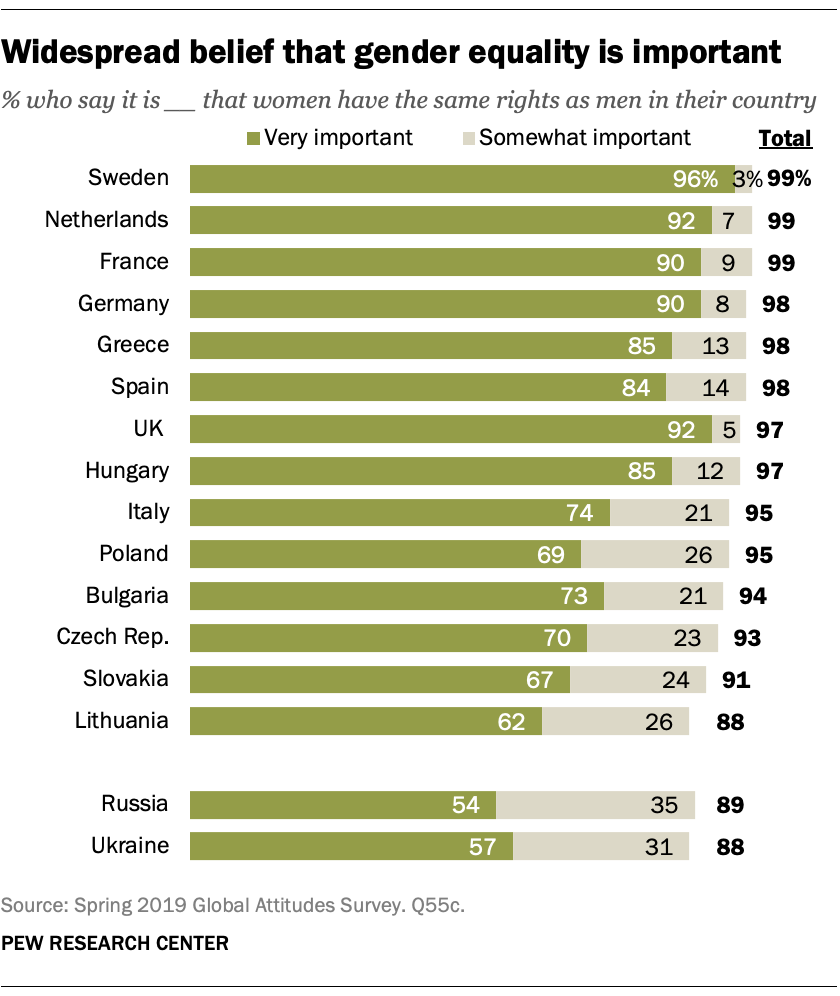 Overwhelming majorities say gender equality is important. Across all surveyed countries, around nine-in-ten adults or more say it is very or somewhat important that women have the same rights as men. Women are more likely than men, however, to view gender equality as very important in most countries.

Meanwhile, most Europeans view an egalitarian marriage – one in which both the husband and wife work – as a more satisfying way of life. Most Europeans do not think men have more right to a job than women in tough economic times, though notable shares of the public do express this opinion in many Central and Eastern European countries.

10Only six of 59 political parties included in the survey receive favorable ratings from half or more of their country’s population. Three of those parties are in the Netherlands, where satisfaction with democracy is especially high. Across the entire survey, the best rated party is Alliance 90/The Greens in Germany (63% favorable ratings). The lowest rated party is Golden Dawn (XA), a far right-wing party in Greece (7% favorable). 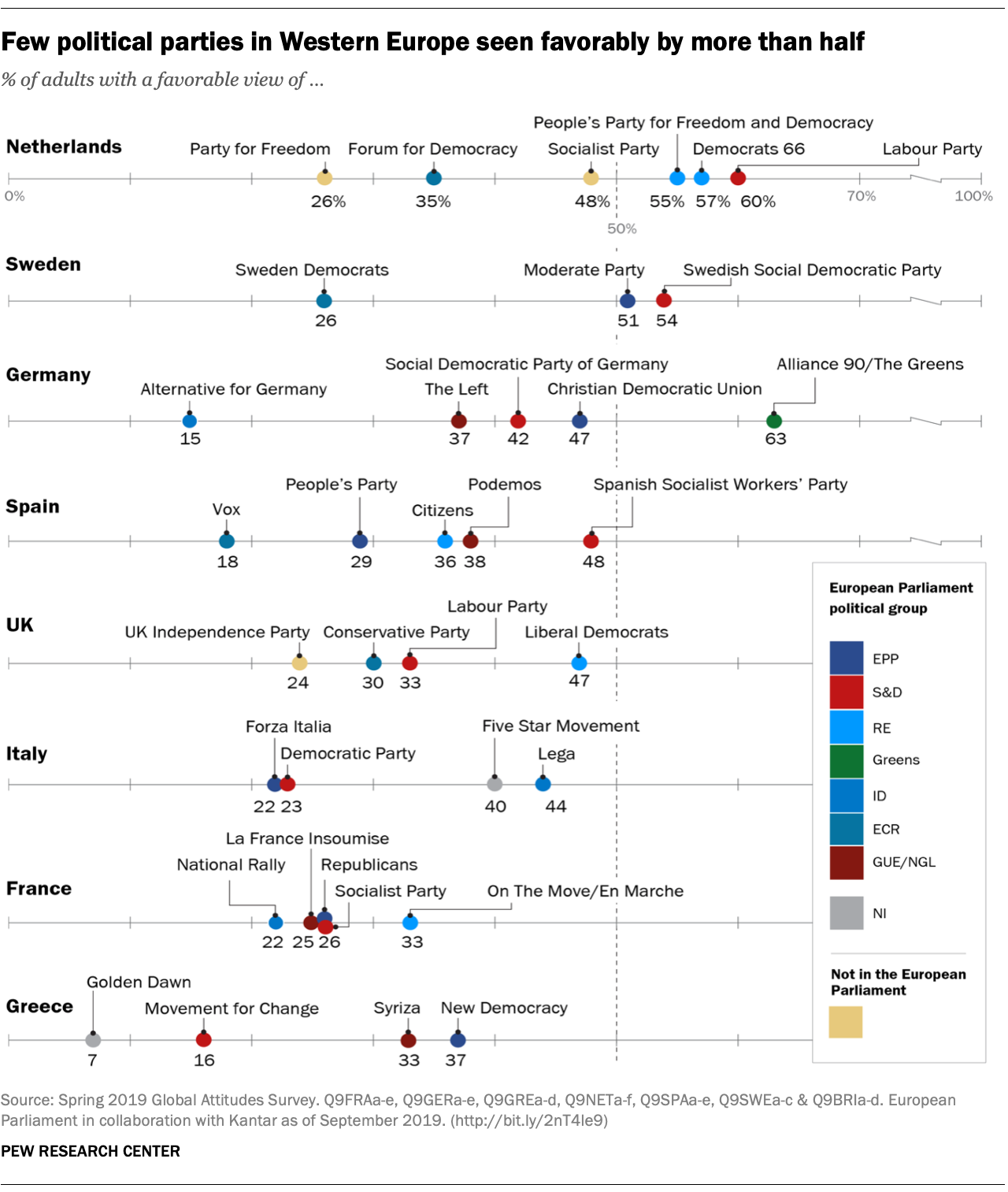