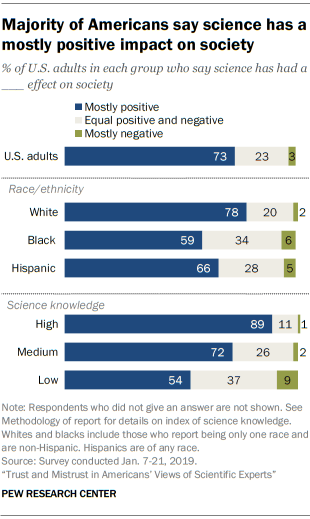 While public trust in scientists and their work can be mixed, a strong majority of the American public thinks of science as having a positive effect on society, and most expect continued benefits to accrue from science in the years ahead.

White adults are more likely than black and Hispanic adults to see the effects of science in positive terms. And people who have higher levels of factual knowledge about science, based on an 11-item index, are especially likely to think science has had a positive effect overall.

When people who said science has had a mostly positive effect were asked to elaborate on how science has benefited society, 56% mentioned advancements in medical science – such as “disease eradication,” “medical devices and new medications” and “cancer research.”

Some mentioned benefits from an aspect of technology and computerization (23% of those asked), offering general references to new or helpful technology and changes to communication. One respondent put it this way: “Science has advanced our communication avenues which opens the world to all.” Others highlighted benefits for the environment (14% of those asked), with one respondent saying that science has “kept us abreast of what to expect from climate change.” Still others (47% of those asked) cited a miscellany of effects, ranging from improvements in food production to developing a better understanding of our world.

Those who saw negative or mixed effects of science on society were also asked their reasons why, and they cited a range of reasons. About one-in-ten (11%) in this group mentioned concerns about scientists and scientific theories. One said, “Scientific research has been contaminated by big business paying to have findings skewed in their favor to deceive the public.” Another replied, “Conflicting results reported on breakthroughs, don’t know what is true. What is true today will change over time.” 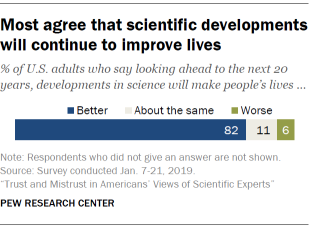 Here, too, medical advances prevail in the public mind as a likely source for improvements ahead, with six-in-ten U.S. adults (60%) referencing this topic when asked to think about developments in science that will make people’s lives better. 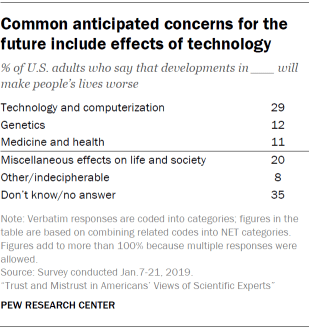 When asked to think about potential downsides from science for people’s lives coming down the road, the most common concerns referenced technology and computerization (29% of U.S. adults), such as automation in the workforce; others cited genetics (12%), including concerns about cloning and “designer babies,” and developments in medicine (11%).

Note: The quoted responses above are lightly edited for spelling and punctuation. See topline for full question wording and the Methodology section of the main report for more information on the index of science knowledge.

Key findings about Americans’ confidence in science and their views on scientists’ role in society
Black Americans have less confidence in scientists to act in the public interest
For the first time, more Americans say 2010 health care law has had a positive than negative impact on U.S.
17 striking findings from 2017
About half of U.S. adults are wary of health effects of genetically modified foods, but many also see advantages