Leaders from the G20 nations will meet in Osaka, Japan, this week at a time when some of the core values of the organization, such as free trade and an environmentally sustainable future, are being challenged. The forum, originally established to ensure global financial stability, will feature discussions around eight main themes this year, including the global economy, women’s empowerment, and energy and the environment.

Pew Research Center conducted public opinion surveys in many of the G20 member nations in 2018. Based on these surveys, here is a look at the way people in these countries view some of the central issues that will be addressed at this year’s summit.

G20 leaders previously committed to a 25% reduction in the gap between the shares of men and women participating in their countries’ labor forces by 2025. At this year’s summit, the focus is on including more women in the labor force, enhancing STEM education for women and continuing engagement with women business leaders.

G20 leaders are planning to discuss how best to address the economic and social impact of technological innovation. Japanese Prime Minister Shinzo Abe, the host of the summit, has expressed interest in using artificial intelligence, robots and big data to achieve a “Society 5.0,” which would involve the integration of cyber (or virtual) space and physical space.

When asked whether robots and computers will do much of the work currently done by humans, roughly nine-in-ten Japanese (89%) said in the Center’s 2018 survey that most jobs will definitely or probably be automated by the year 2050 – a higher share than in many other G20 countries surveyed. The Japanese public also is more likely to see the economic benefits of an automated future: 74% of Japanese adults say the economy would become more efficient if robots and computers were able to do much of the work done by humans – 27 percentage points higher than the share who say this in the second-highest G20 public surveyed (Brazil).

Accompanying technological advancements are greater digital security risks – another focus of the G20. People in most surveyed G20 countries say it is likely that cyberattacks will damage public infrastructure like power grids or internet systems. People in Japan, South Korea and the U.S. are especially concerned, with more than eight-in-ten adults in each country saying that such cyberattacks are likely.

The G20 summit details include the statement that international trade and investment are “important engines of growth, productivity, innovation, job creation and development.” In many of the G20 countries, majorities of adults say that growing trade and business ties between their nations and others is a good thing.

Views on the overall benefits of trade largely align across the surveyed G20 nations, though the Japanese public is less convinced of a positive effect of trade on employment. Only about two-in-ten adults in Japan (21%) believe trade creates jobs, while 40% believe trade does not have an impact on the creation of jobs. There is more certainty that trade creates jobs in the other G20 nations, with a median of 40% across 15 surveyed countries believing that trade generates jobs. However, only about two-in-ten among people in Italy and Argentina say that trade creates jobs, compared with about half who say trade destroys jobs in those countries. 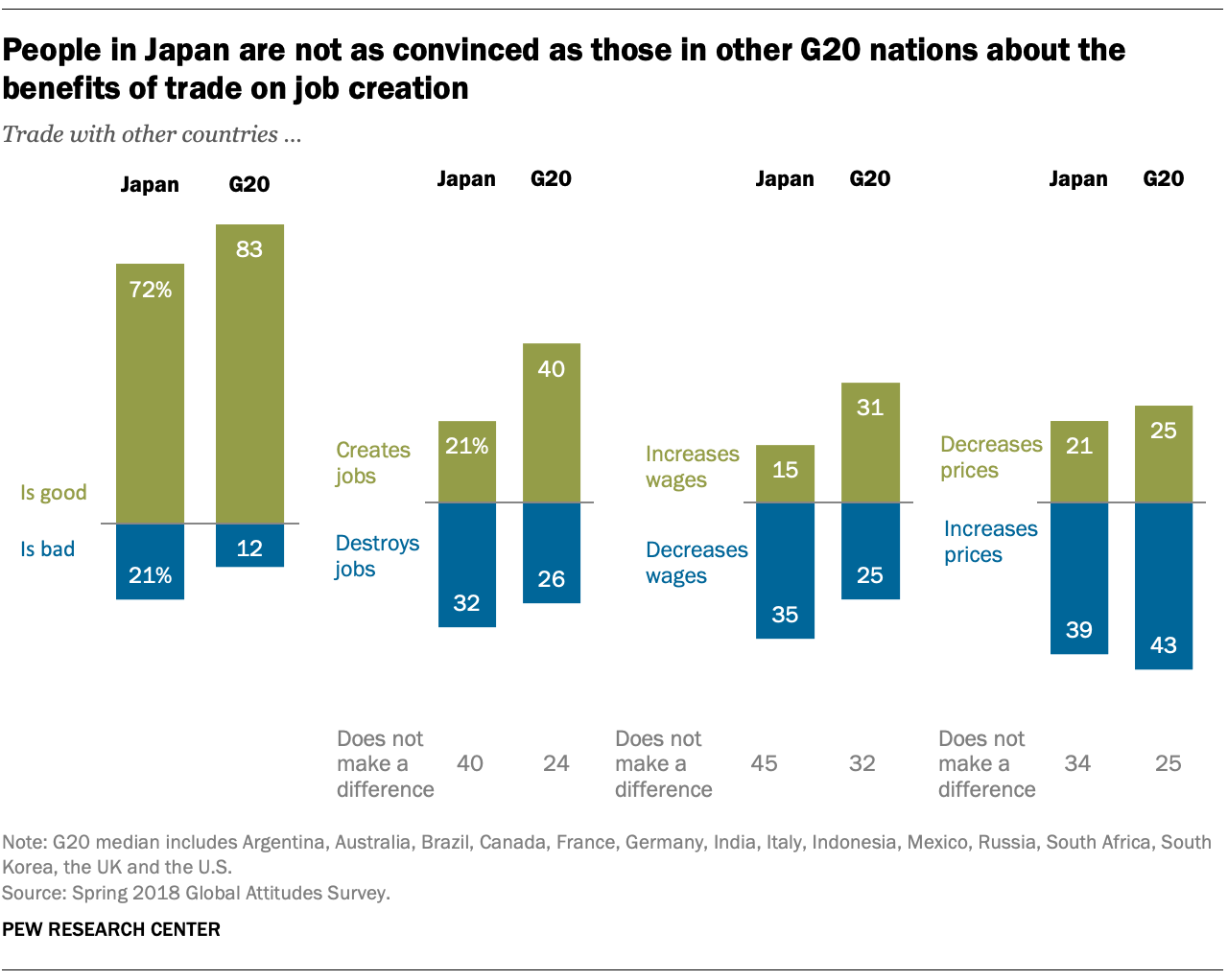