Mexico has apprehended and deported more migrants within its borders so far this fiscal year than at the same point in fiscal 2018, though the totals remain well below levels recorded in other recent years, according to a Pew Research Center analysis of data from Mexico’s office for population and immigration statistics.

The migrants apprehended and deported are individuals who failed to present valid immigrant documentation in Mexico. They largely come from the same three Central American countries that have driven a surge in migration at the southern border of the United States in recent months: El Salvador, Guatemala and Honduras.

President Donald Trump has called on Mexico to do more to reduce the flow of migrants into the U.S., threatening to impose tariffs against America’s southern neighbor unless it broadens its effort to curtail the number of Central American migrants that reach the U.S.-Mexico border. Amid the escalation in tensions, here’s a look at how current migrant apprehension and deportation patterns in Mexico compare with past trends: 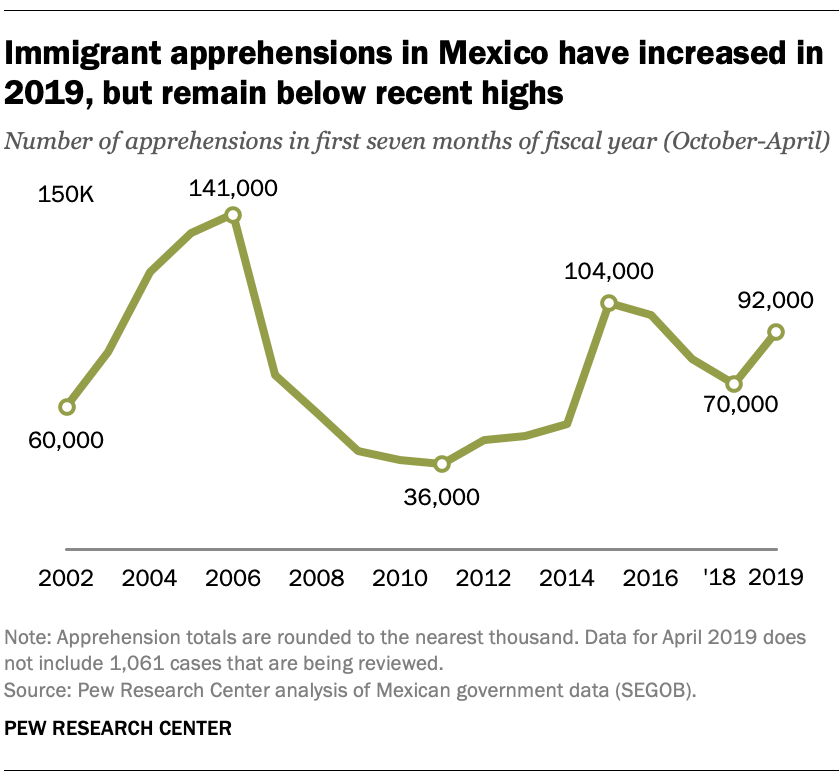 Mexican authorities apprehended nearly 92,000 migrants in the first seven months of fiscal 2019, up 32% from the same period the previous year. Still, this year’s total remains below the 141,000 apprehensions made during the same period in fiscal 2006 (when the U.S. also experienced a surge of non-Mexican immigrant apprehensions at the southern border). It’s also far below the number of southern border apprehensions made by the U.S. government during the first seven months of fiscal 2019. 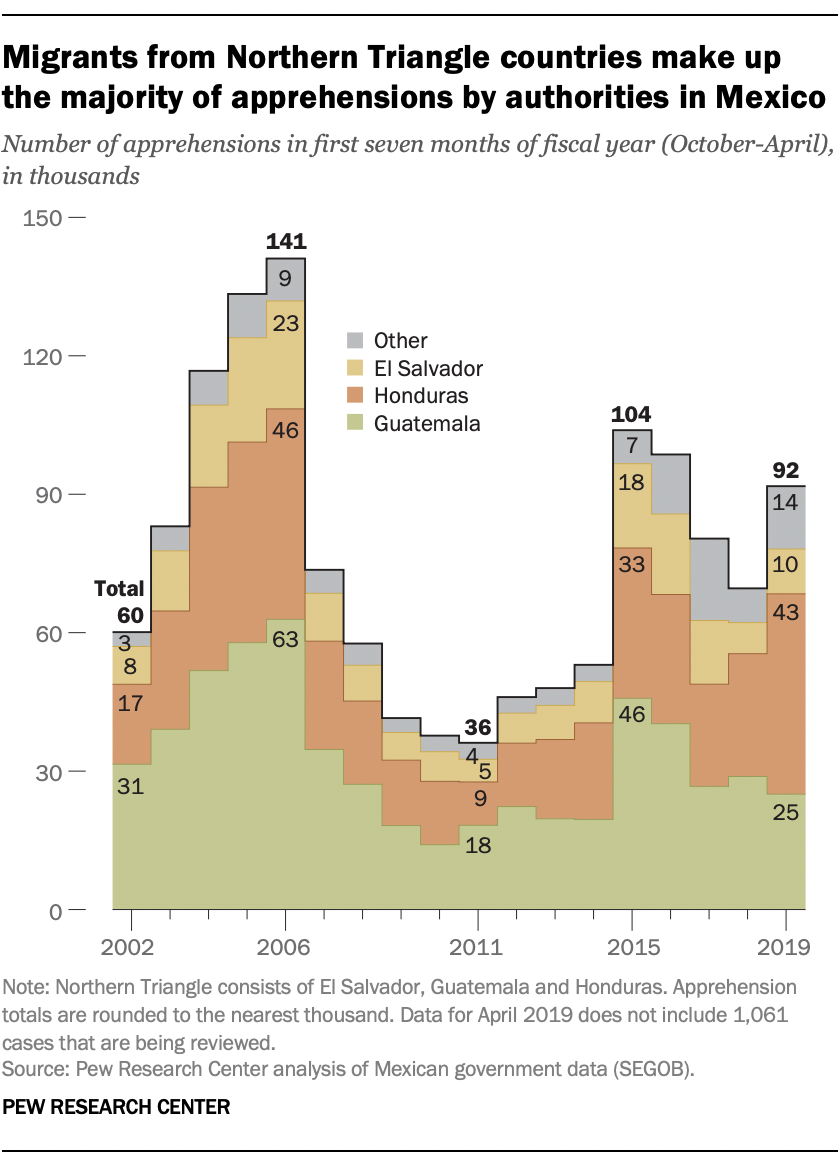 People from the Northern Triangle – El Salvador, Guatemala and Honduras – make up 85% of migrants apprehended in Mexico so far in fiscal 2019. Migrants from these countries have historically accounted for the most apprehensions in Mexico, but their share so far in the current fiscal year is the lowest in nearly two decades — 10 percentage points lower than in 2002, when they made up 95% of all apprehensions in Mexico.

Mexican authorities have apprehended 43,000 migrants from Honduras so far this fiscal year, accounting for almost half (47%) of the total. The number of apprehended Honduran immigrants is up 63% over the same period in fiscal 2018. There have been fewer apprehensions of both Guatemalan (25,000) and Salvadoran (10,000) migrants in the first seven months of fiscal 2019, however. 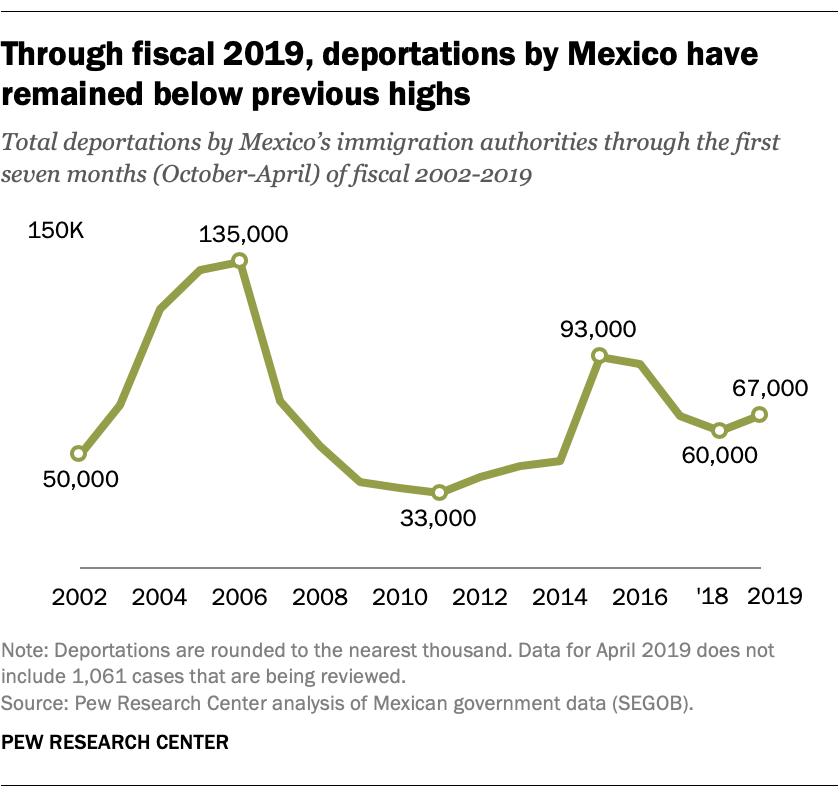 In the first seven months of fiscal 2019, Mexico deported 35,000 Honduran nationals, 22,000 Guatemalans and 7,000 Salvadorans. Together, the Northern Triangle nations account for 96% of all deportations from Mexico so far this year, which is consistent with their share since 2002, the first year with available data. 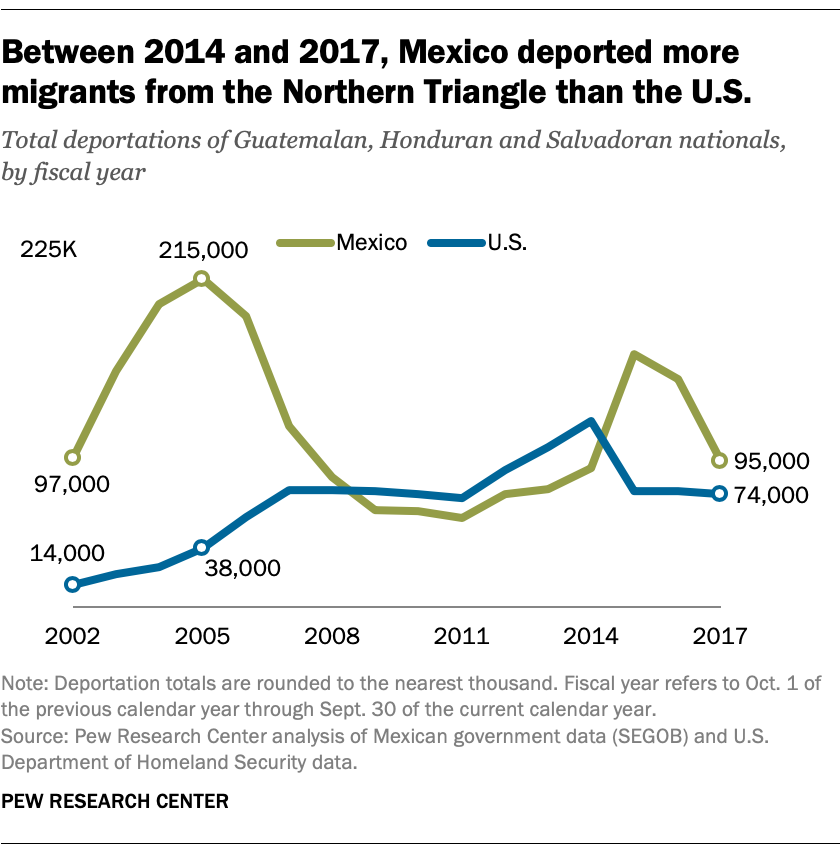