Looking for a new religious congregation is common in the United States. In fact, about half of American adults (49%) have at some point searched for a new church or congregation.

But how likely Americans are to look for a new church varies by their education and income levels. About six-in-ten (59%) college-educated Americans have searched for a new religious congregation, compared with only 38% of those with a high school education or less, according to a new Pew Research Center analysis of survey data collected in 2015. Likewise, higher-income Americans are more likely to look for a new church than those with lower incomes. This may be due in part to the fact that highly educated and affluent Americans tend to be more geographically mobile. 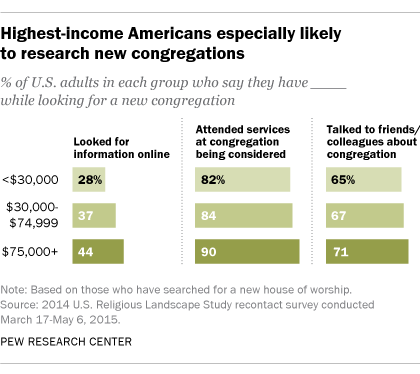 Income and education also influence how people look for a new church. In some cases, church “shoppers” with higher incomes are more likely than less-affluent adults to research a potential new religious congregation. For instance, among the roughly half of Americans who have looked for a new congregation, 44% of those with family incomes of $75,000 or more read about the congregation online, compared with 37% of those with incomes between $30,000 and $74,999, and about three-in-ten (28%) with incomes below $30,000. People with higher incomes also are more likely to visit houses of worship to attend services and to talk to friends or colleagues before choosing a new congregation.

Education is even more strongly associated with researching a new congregation – perhaps because people generally learn more research skills the longer they stay in school. For example, 71% of college graduates talked to church members before choosing a new congregation, compared with 63% among those with a high school degree or less. 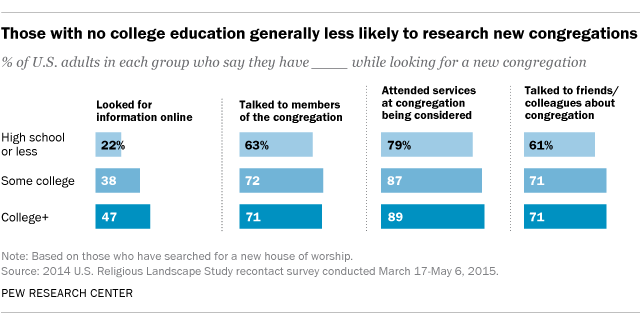 Socioeconomic status also affects the congregational characteristics that church shoppers value most. Location is particularly important to more affluent, well-educated adults. Roughly three-quarters of church shoppers who either are college educated or who have household incomes of $75,000 or more (77% and 75%, respectively) say location played an important role in their choice of a new congregation. By comparison, about two-thirds of church shoppers either with a high school degree or less or a household income of less than $30,000 (64% and 67%, respectively) say location is important. 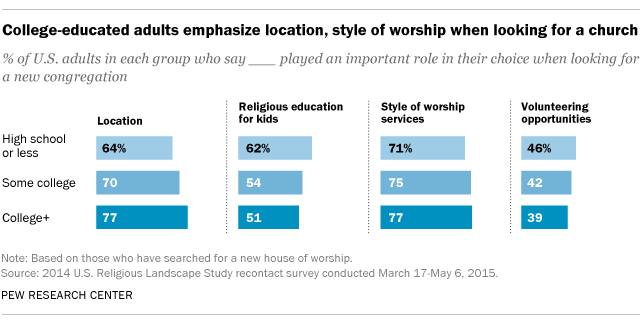 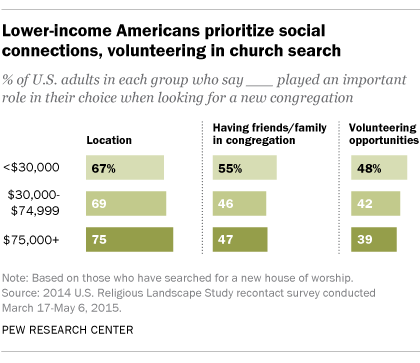 By contrast, both less affluent and less educated church shoppers are more likely to value the potential social connections, religious education and community service offered by a church. Roughly six-in-ten (62%) of those with a high school degree or less say that access to religious education for children played an important role in their choice of congregation, compared with about half (51%) of college-educated adults.