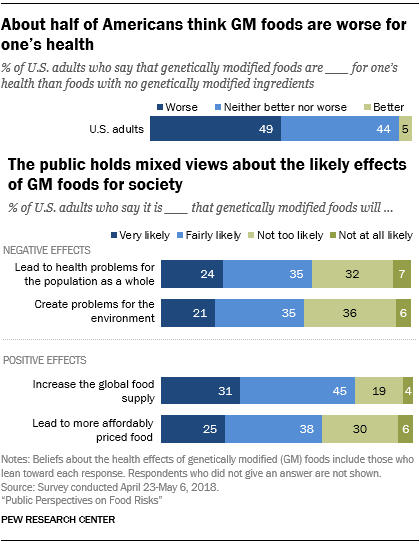 The survey finds a 10-percentage-point increase in the share of adults who say foods with GM ingredients are worse for one’s health from a 2016 Pew Research Center survey, when the share was 39%. The uptick in concern has come primarily among those with low levels of science knowledge; there has been no shift in this belief among those with high levels of science knowledge (based on a nine-item index of factual knowledge across a range of topics).

Genetic engineering techniques for crops continue to evolve, as do government regulators’ definitions of what qualifies as genetically modified. That has left consumers navigating a range of new food technologies, amid ongoing debates over how food affects health.

Advocates of GM crops argue that such foods have lower production costs and can help reduce world hunger. Roughly three-in-ten Americans (31%) say it’s very likely that GM foods will increase the food supply and 25% say it’s very likely these foods will result in more affordably priced food. About four-in-ten or more consider each of these possibilities “fairly likely.”

At the same time, about a quarter of U.S. adults (24%) say GM foods are very likely to lead to problems for public health, while 21% say it’s very likely that these foods will create problems for the environment. Around a third (35%) consider each of these possibilities fairly likely. 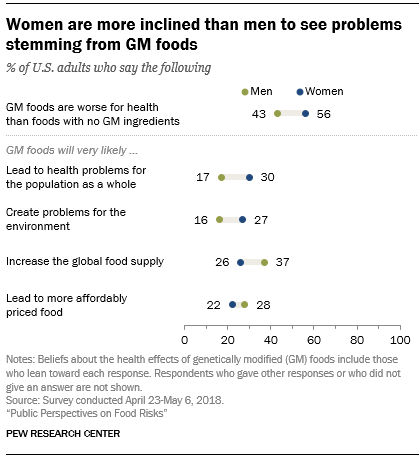 Men and women differ in their beliefs about GM foods. Overall, more women than men (56% vs. 43%) say that GM foods are worse for one’s health than foods with no GM ingredients. Women are also more inclined than men to say it is very likely that GM foods will lead to health problems for the population as a whole (30% vs. 17%) or create problems for the environment (27% vs. 16%). In contrast, men are more likely to expect positive outcomes for society from GM foods.

These findings are in keeping with gender differences across a range of food issues. For example, women are consistently warier than men of health risks from food additives.

There are also wide differences in beliefs about GM foods depending on the degree to which people care about this issue. Those who care a great deal about the GM foods issue are far more inclined than those who are less concerned to say GM foods are worse for one’s health or to expect negative consequences for society from these kinds of foods.

Amid debate over labeling GM foods, most Americans believe they’re unsafe
Younger generations stand out in their beliefs about organic, GM foods
About half of U.S. adults are wary of health effects of genetically modified foods, but many also see advantages
Many publics around world doubt safety of genetically modified foods
Americans are divided over whether eating organic foods makes for better health