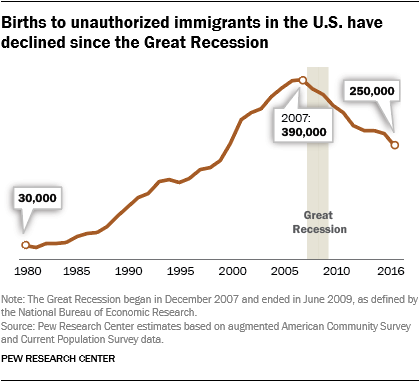 About 250,000 babies were born to unauthorized immigrant parents in the United States in 2016, the latest year for which information is available, according to a new Pew Research Center analysis of government data. This represents a 36% decrease from a peak of about 390,000 in 2007. The analysis follows President Donald Trump’s announcement that his administration may seek to end “birthright citizenship.”

Births to unauthorized immigrants in the U.S. generally rose throughout the 1980s, 1990s and 2000s but have declined since the start of the Great Recession about a decade ago, according to estimates based on data from the Census Bureau’s American Community Survey and its Current Population Survey.

The number of babies born to unauthorized immigrant parents represented about 6% of the 4.0 million total births in the U.S. in 2016, compared with 9% of all births in 2007.

Birthright citizenship derives from the 14th Amendment to the U.S. Constitution, adopted in 1868, which grants citizenship to anyone born in the U.S. The provision has long been interpreted to apply to U.S.-born children regardless of the immigration status of their parents.

Overall, around 5 million U.S.-born children younger than 18 were living with at least one unauthorized immigrant parent in 2016, up from around 4.5 million in 2007, according to the new estimates. The number of U.S.-born children has leveled off in recent years, reflecting the decline in births and the decrease in the unauthorized immigrant population since the Great Recession. 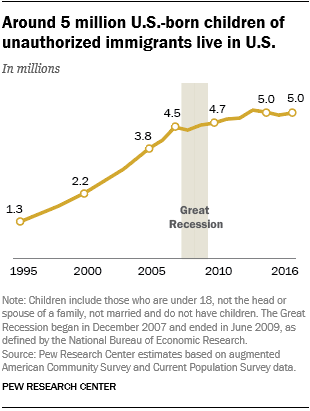 An NBC News/Wall Street Journal survey conducted in September 2017 found that around two-thirds of Americans (65%) said birthright citizenship should continue, compared with 30% who said it should end.

In a Pew Research Center survey conducted in summer 2015, prior to Trump’s presidential campaign, six-in-ten Americans opposed the idea of changing the U.S. Constitution to prohibit children of those who are not legal residents from becoming citizens, while 37% supported the idea. Democrats opposed it by a three-to-one margin (75% vs. 23%), but Republicans were more split: About half (53%) favored amending the Constitution to end birthright citizenship while 44% opposed it. Among independents, 58% opposed changing the Constitution for this reason while 37% supported it.