As immigration emerges as a key issue in the presidential campaign, there is little common ground between Republicans and Democrats in views of several immigration policy proposals. But partisan disagreements are much more pronounced on some issues than others. 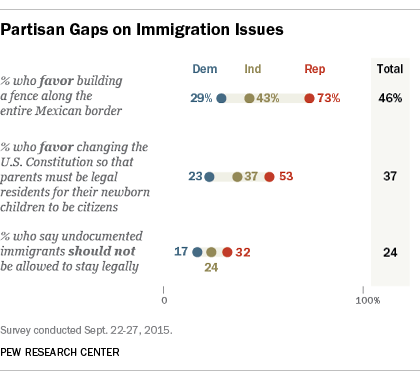 Overall, the public continues to be divided over building a fence along the entire U.S.-Mexican border: 46% favor erecting a fence, while 48% are opposed, little changed from 2011.

The latest national survey by the Pew Research Center, conducted Sept. 22-27 among 1,502 adults, finds that most Americans (60%) oppose the idea of changing the U.S. Constitution to prohibit children of those who are not legal residents from becoming citizens; 37% favor changing the Constitution to end “birthright citizenship.”

Little Overall Change Since 2007 in Views of a Border Fence 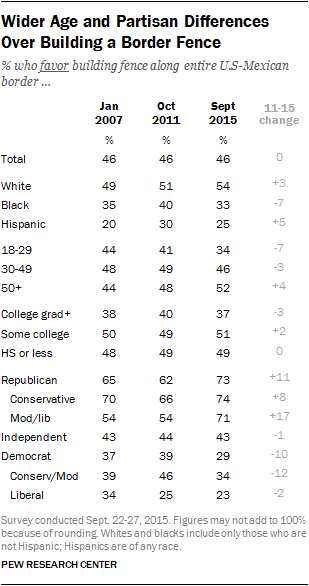 Public opinion about building a fence along the entire U.S.-Mexican border has shown virtually no change since 2007 or 2o11. But age and partisan differences in opinions about a proposed border fence have widened, with Republicans becoming more supportive and Democrats less so over the past four years.

Nearly three-quarters of Republicans (73%) now favor building a fence across the entire border with Mexico, up from 62% in 2011. Since then, support for a fence has increased 17 percentage points among moderate and liberal Republicans (from 54% to 71%) and eight points among conservative Republicans (66% then, 74% now). 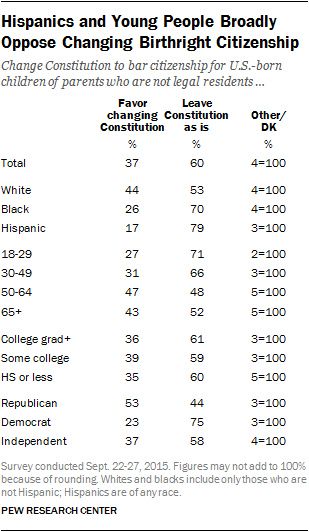 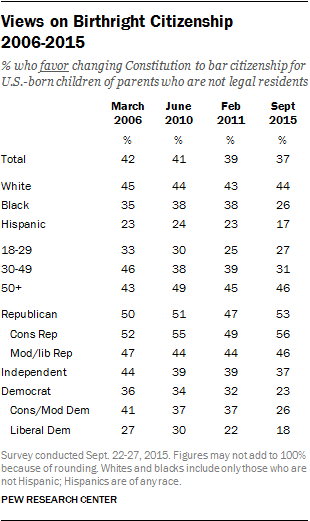 There is broad awareness of birthright citizenship for children born to illegal immigrants in the United States: 90% say they are aware that these children are automatically citizens. About four-in-ten (37%) favor changing the Constitution so that parents must be legal residents of the U.S. in order for their newborn children to be citizens; 60% favor leaving the Constitution as it is.

Whites are far more supportive (44% favor) of changing the Constitution to end birthright citizenship than are blacks (26%) or Hispanics (17%). There are only slight differences in opinions among those of differing levels of education.

Opinions about birthright citizenship have changed only modestly among most sub-groups since the Pew Research Center began asking the question in 2006. But partisan differences have widened over the last four years: In 2011, 47% of Republicans and 32% of Democrats favored changing the Constitution to end birthright citizenship. Today, the gap is 30 percentage points (53% of Republicans, 23% of Democrats). 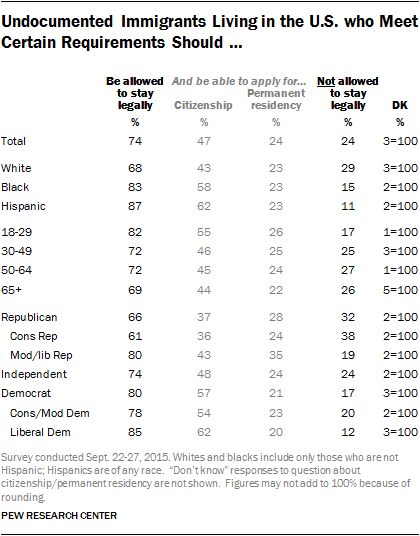 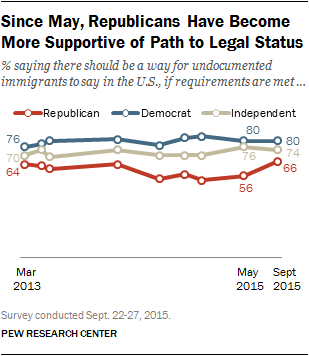 As in the past, majorities across all demographic and partisan groups favor providing legal status to undocumented immigrants. Republicans (66%) continue to be less likely than independents (74%) or Democrats (80%) to support a path to legal status for those in the U.S. illegally.

However, Republican support for finding a way to allow undocumented immigrants to stay in the U.S. if they meet certain requirements has increased 10 percentage points since May, from 56% to 66%. There has been virtually no change in opinion among Democrats or independents.

On Immigration Policy, Wider Partisan Divide Over Border Fence Than Path to Legal Status
Survey ReportLittle Overall Change Since 2007 in Views of a Border FenceMost Favor Continued Birthright CitizenshipBroad Support for Providing Legal Status to Undocumented Immigrants
About the Survey