People in Western Europe have a clear preference for television as a source of news. And while the use of online and radio outlets for news is also widespread, print news consumption trails far behind the other formats, according to a Pew Research Center survey of eight countries conducted in late 2017. 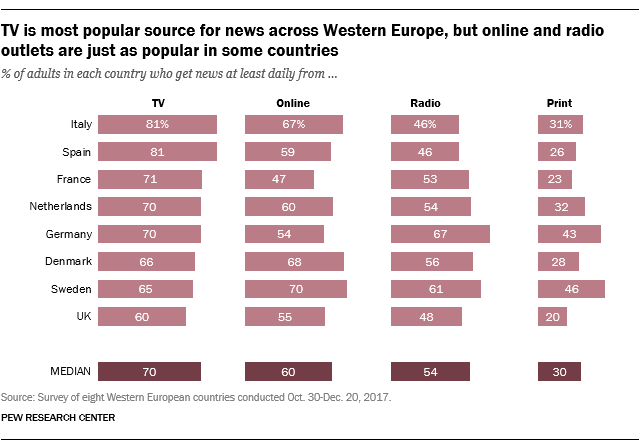 Online news consumption is slightly less common: A regional median of 60% get news this way at least daily. But in some countries, the share of people who get news online competes with – or even exceeds – the share who get it through TV.

People in Sweden and Denmark, for example, get news online at about the same or a higher rate as they do from TV. Those in the UK and Netherlands narrowly prefer TV over online news, each with a platform gap of 10 percentage points or less. France and Spain show the clearest preference for TV news over online outlets, each showing a difference of more than 20 points.

While not as common as TV, radio is also a popular news platform in Western Europe. A median of 54% get news from radio at least daily, but there are again differences among the eight countries studied. In Germany and Sweden, radio is about as popular as TV as a daily news source, and in Germany and France, radio is preferred over the web. By contrast, about half of adults or fewer in the UK, Italy and Spain use the radio daily for news.

The least common platform Western Europeans use for news is print, with a median of 30% getting news this way. Print news consumption is highest in Sweden, where 46% of adults say they get news this way. It is lowest in the UK, where 20% do so. 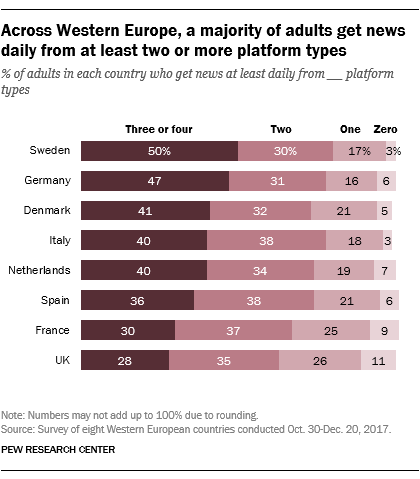 Similar to Western Europeans, Americans also display a preference for TV news. In a recent Pew Research Center report on news consumption, half of U.S. adults say they often get TV-based news. Online news, at 45%, was the next most common platform, followed by radio (26% get news daily this way) and print (16%).