A growing share of public primary schools in the United States have sworn law enforcement officers on site, according to a recent government report that comes amid renewed attention to school security. 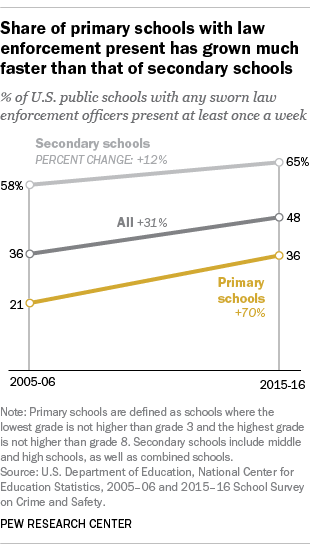 An estimated 36% of U.S. public primary schools had sworn officers on site at least once a week in the 2015-16 school year, up from 21% a decade earlier, according to the report from the National Center for Education Statistics and the Bureau of Justice Statistics. The share of primary schools with an officer present grew much faster during this period than the share of secondary schools with an officer on site, which increased from 58% to 65%. (The most recent available data for both types of schools are for the 2015-16 school year. Primary schools are defined as schools where the lowest grade is not higher than grade three and the highest grade is not higher than grade eight. Secondary schools include middle and high schools, as well as combined schools.) 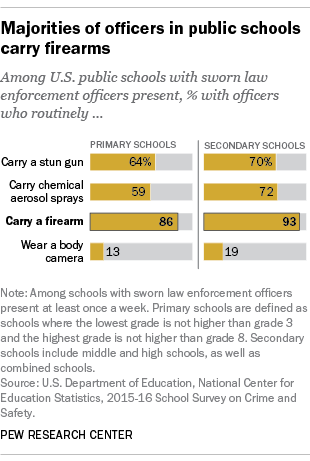 Regarding general school safety, majorities of primary schools offered training to classroom teachers or aides in safety procedures (93%) and crisis prevention and intervention (72%), according to the report.