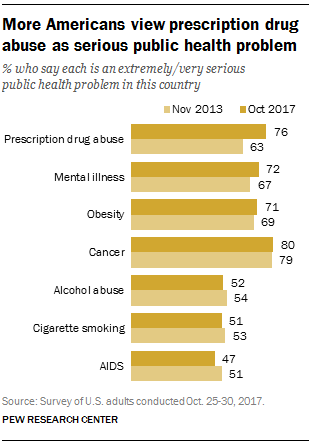 Americans’ concerns about prescription drug abuse have risen over the past four years, with some of largest increases coming among well-educated adults.

Concerns about mental illness are also up slightly from 2013. Currently, 72% say mental illness is an extremely or very serious public health problem, compared with 67% who said this four years ago, according to a Pew Research Center survey conducted Oct. 25-30 among 1,504 adults.

Other public health concerns are largely unchanged since 2013. Eight-in-ten Americans now say cancer is an extremely or very serious problem, while 71% say the same for obesity; similar shares said this in 2013. The shares today saying that alcohol abuse (52%), smoking (51%) and AIDS (47%) are at least very serious public health concerns are little changed from four years ago and remain lower than other problems asked about. 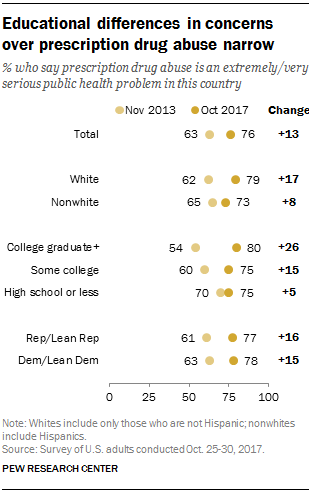 College graduates, in particular, express greater concern over prescription drug abuse than they did four years ago. And the educational differences in views of this problem have narrowed considerably.

By contrast, concern about prescription drug abuse has remained largely stable among those with a high school diploma or less (70% said extremely/very serious in 2013; 75% say it today).

As in the past, there are no significant partisan differences in views of whether prescription drug abuse is a serious public health problem.

Large majorities in both parties say prescription drug abuse is an extremely or very serious problem. Both parties have seen similar increases in concern over prescription drug abuse: Among Republicans and Republican-leaning independents, the share saying it was extremely or very serious grew 16 percentage points, while among Democrats and Democratic leaners it increased 15 points. 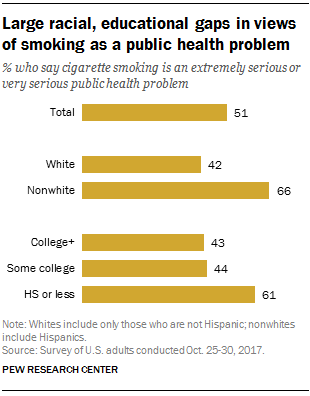 A separate Pew Research Center survey conducted in August found no partisan differences when it comes to having a family member or close friend who is addicted to drugs.

In the new survey, about half of Americans (51%) say cigarette smoking is an extremely or very serious public health problem in the country today, but there are educational and racial differences in these views. 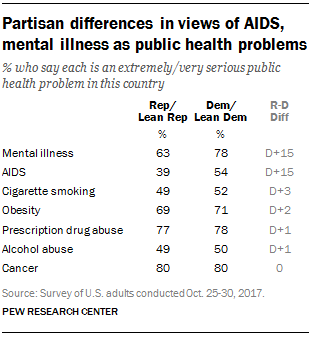 People with less education are more likely to smoke, according to the Centers for Disease Control and Prevention. They are also more likely to say smoking is an extremely or very serious public health problem, the Pew Research Center survey found. Today 61% of those who have a high school education or less say smoking is at least a very serious problem, while only 44% those who have some college experience and 43% of those with a college degree or more say the same. 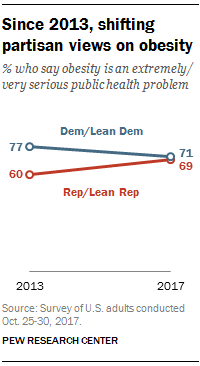 Two-thirds of nonwhites say smoking is an extremely or very serious public health problem, while 42% of whites say the same.

While Republicans and Democrats generally agree about the severity of many public health problems, they diverge in their views of mental illness and AIDS as serious health problems for the country.

Americans see U.S. losing ground against mental illness, prescription drug abuse
Fewer Americans see cigarette smoking as a major public health problem
Nearly half of Americans have a family member or close friend who’s been addicted to drugs
The concerns and challenges of being a U.S. teen: What the data show
As fatal overdoses rise, many Americans see drug addiction as a major problem in their community