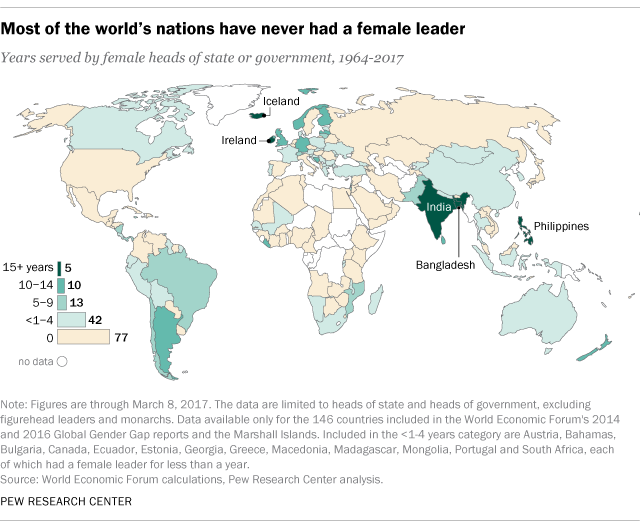 As nations around the world celebrate International Women’s Day, the number of countries that have had a female leader continues to expand. But the list is still relatively short, and even when women have made it to power, they’ve rarely led for a long time.

Fifty-six of the 146 nations (38%) studied by the World Economic Forum in 2014 and 2016 have had a female head of government or state for at least one year in the past half-century. In 31 of these countries, women have led for five years or less; in 10 nations, they have led for only a year. The Marshall Islands, which is not included on the WEF list of countries, has also had a female leader for one year. 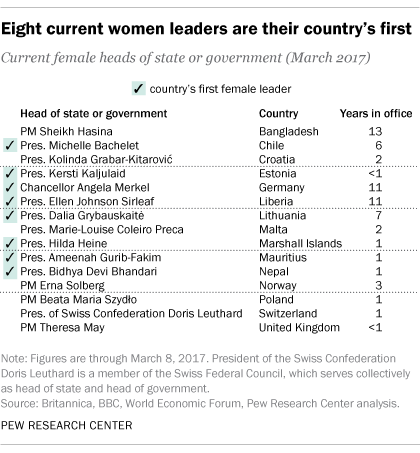 There are 15 female world leaders currently in office, eight of whom are their country’s first woman in power, according to our analysis of data from WEF and other sources. While the number of current female leaders – excluding monarchs and figurehead leaders – has more than doubled since 2000, these women still represent fewer than 10% of 193 UN member states.

The list of women currently in office includes nine heads of state and eight heads of government. (Some leaders are both, and President of the Swiss Confederation Doris Leuthard is neither on her own – Switzerland’s Federal Council collectively heads both state and government and leadership rotates between its seven members.)

Including Switzerland, three-fifths of the countries now under female leadership are in Europe. Last year, following the United Kingdom’s vote to exit the European Union in June, Theresa May became the seventh woman currently leading a European country when she replaced David Cameron as the country’s prime minister. May is the second woman in the position after Margaret Thatcher, who served from 1979 to 1990. May was followed by Kersti Kaljulaid, who became president of Estonia in October 2016, and Doris Leuthard, who is serving as president of the Swiss Confederation for 2017.

Three notable female politicians are not included on the list of current leaders. Aung San Suu Kyi of Burma (Myanmar), a Nobel Peace Prize winner celebrated for her human rights advocacy and political activism, led her National League for Democracy party to a landslide victory in 2015. But because her late husband and children are foreign citizens, she is constitutionally barred from becoming Burma’s president; she instead holds the newly created position of state counsellor.

Taiwanese President Tsai Ing-wen is not included on the list because of historical ambiguity about Taiwan’s territorial sovereignty. And South Korean President Park Geun-hye is currently going through impeachment proceedings and has been stripped of her presidential powers and duties. 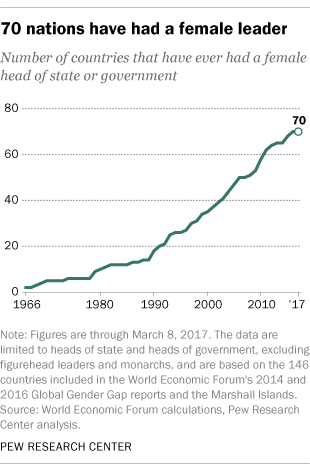 When Indira Gandhi became the first and, to date, only female Prime Minister of India in 1966, just one modern-day country – Mongolia – had previously seen a woman in power. By 1991, the number of countries that had some experience under female leadership had reached 20. Today, 70 countries have had some sort of female leadership (elected, appointed, interim or other), including six of the 10 most populous countries in the world.

Bangladesh, which has the eighth-largest population in the world (156.2 million), has had the longest stretches with female leaders in the past 50 years. Current Prime Minister Sheikh Hasina and her rival Khaleda Zia have collectively – but separately – ruled over Bangladesh for 23 years since 1992, according to the WEF data.

India, which has the world’s second-largest population, follows its eastern neighbor with a total of 21 years under female leadership. Ireland also has had 21 years of female leadership, while the Philippines and Sri Lanka have had 16 and 13 years, respectively.

Nordic countries – with the exception of Sweden, which has never had a female head of government – also stand out for their length of female leadership. As of 2017, Iceland has had a female president or prime minister in 20 of the past 50 years, the fourth-most in the world. Norway and Finland rank close behind, with 13 and 12 years, respectively.

The U.S. and its neighbors have had little or no time under female leadership. The U.S. and Mexico have never had a woman as chief executive, and Canada’s first and only female prime minister served for just four months.

How do your views on gender compare with those of other Americans?

A record number of women are serving in the 117th Congress

When should a woman have children if she’s thinking about running for office?

The share of women in legislatures around the world is growing, but they are still underrepresented

Trump has appointed a larger share of female judges than other GOP presidents, but lags Obama