A solid majority of Americans believe vaccinating their children against measles, mumps and rubella has high preventive health benefits. But several groups – particularly parents of young children – are less convinced of the benefits and more concerned about the safety of the MMR vaccine.

They stand apart from the 73% of Americans who see the MMR vaccine as a benefit, the 66% who say there is a low risk of side effects and the 88% who say the benefits of the vaccine outweigh the risks, according to a new Pew Research Center survey. Further, some 82% of Americans support requiring children attending public school to be vaccinated for measles, mumps and rubella because of the potential health risk to others. By contrast, 17% of Americans say parents should be able to decide not to vaccinate and 10% believe the risks outweigh the benefits.

Public health officials place particular importance on the views of parents who must decide whether or not to follow the recommended schedule to immunize their children for measles, mumps and rubella starting when their children are between 12 and 15 months old. 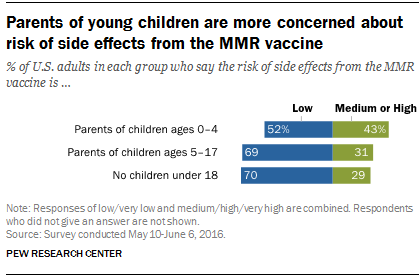 On average, parents of young children tend to be younger than the general population. There are some differences in views about vaccines by generation. Adults younger than 30 are less inclined than older age groups to think the benefits of the MMR vaccine outweigh the risks (79% compared with at least 90% of those in older age groups). These age differences are broadly consistent with past Pew Research Center surveys that looked at more general support for requiring childhood vaccines and perceptions of vaccine safety. 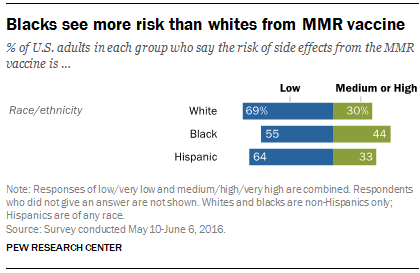 Views about the MMR vaccine also differ by race and ethnicity. For example, blacks (44%) are more likely than whites (30%) to say the risk of side effects from the MMR vaccine is either medium or high. Some 56% of blacks rate the preventive health benefits of the MMR vaccine as high, compared with 79% of whites. 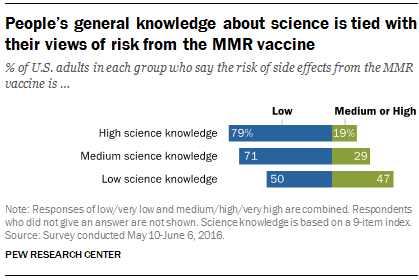 Knowledge of science topics is also a factor in distinguishing those who are more concerned about the safety of vaccines. Americans who are high in science knowledge, based on a nine-item index of factual questions covering a range of topics, overwhelmingly rate the risk of side effects from the vaccine as low (79%). By contrast, U.S. adults with low science knowledge are closely divided on whether the risk of side effects is low (50%) or is medium or higher (47%). (More details on the index of science knowledge are available in Chapter 4 and the Methodology section of the related report, “The Politics of Climate.”) 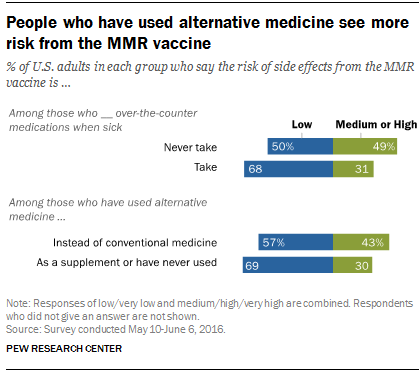 People’s practices in connection with conventional and alternative medicine also tend to align with their views about the MMR vaccine. For example, 8% of Americans report that they never take over-the-counter medications for cold or flu symptoms. This subgroup is closely divided over whether the risk of side effects from the MMR vaccine is low (50%) or at least medium (49%).