A substantial majority of U.S. voters – 84% – followed along as results trickled in on election night, and television was by far their most common way of tracking returns. Nearly nine-in-ten of those who followed returns (88%) did so on TV, while 48% used online platforms. About one-in-five (21%) used social networks such as Twitter or Facebook, according to a Pew Research Center post-election survey. 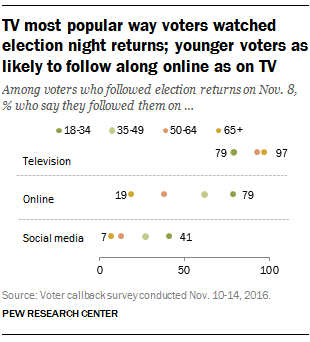 The share of voters who tracked election returns on TV was similar to the share who did so during the last presidential election (92% in 2012, 88% this year). On the other hand, digital sources have gained ground. The share of voters who followed returns online increased by 14 percentage points since 2012 (from 34% to 48%), while the share who tracked results using a social networking site more than doubled (from 8% to 21%).

Again, these experiences greatly differ by age: 50% of voters under age 50 who followed election returns followed them on TV as well as online, but that share drops to 26% among voters 50 and older. And while 68% of those over 50 who followed returns said they only did so by watching TV, that compares with just 28% of those under 50.

In addition to surveying voters on the types of platforms they used to watch election results, Pew Research Center also asked with whom voters watched the returns. A majority of voters who kept up with election returns (79%) did so by themselves or with family, while 14% reported they followed along with friends, and 6% watched with both friends and family.