In a campaign marked by skepticism toward the political process, only about half of all registered voters (49%) are “very confident” that their vote will be accurately counted in the upcoming election. This view is particularly striking among supporters of Donald Trump and stands in contrast to the 2004 and 2008 elections, when substantial majorities of voters who backed George W. Bush and John McCain expressed confidence in the count of their votes. 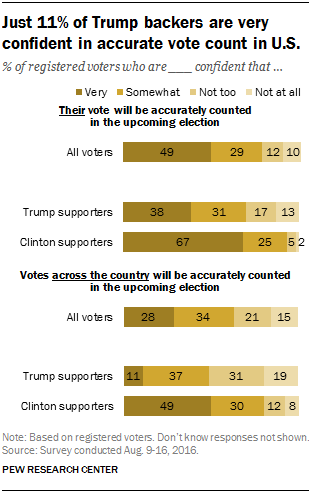 Pew Research Center’s new national political survey finds that just 38% of registered voters who support Trump are very confident their vote will be accurately counted. Another 31% say they are somewhat confident, while 30% have little or no confidence their vote will be counted accurately.

Among Clinton supporters, 67% have a high degree of confidence that their vote will be counted accurately and 25% are somewhat confident. Just 7% have little or no confidence.

The gap between the two camps is about as large among those who express confidence in an accurate vote count nationally. Nearly half of Clinton supporters (49%) and just 11% of Trump supporters are highly confident that votes across the country will be counted accurately.

About half of Trump supporters (48%) are very or somewhat confident in an accurate vote count nationally, while 51% say they are not too or not at all confident. By contrast, a 79% majority of Clinton supporters are confident in the accuracy of the nationwide count, compared with just 20% who are not. 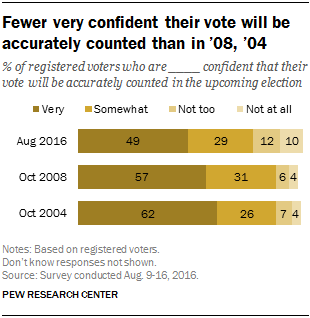 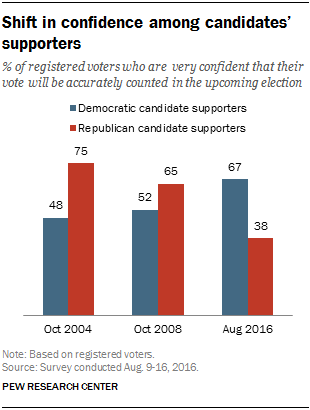