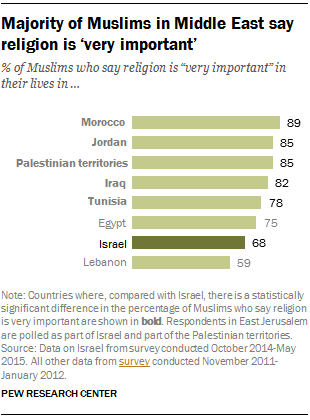 Israel’s Muslims are highly devout when compared with members of the country’s other principal religions, including Jews, Christians and Druze. However, in the larger context of the Middle East and North Africa, Israeli Muslims actually place less emphasis on religion and some of the key pillars of their faith than do Muslims in neighboring countries.

The fact that religion is generally less central to the lives of Israeli Muslims is also borne out by the relatively low rates of salat (five daily prayers), alms-giving and fasting during Ramadan. Together, these practices represent three of the Five Pillars of Islam — rituals all Muslims are expected to observe.

Roughly half (52%) of Israeli Muslims pray five times a day, compared with a median of 63% among Muslims in other Middle Eastern and North African countries polled, including 83% in Iraq. Jordan and Egypt are the only countries polled where the proportion of Muslims who pray all five times stands at roughly half – 54% and 53% respectively.

Similarly, while a majority of Israeli Muslims give a portion of their accumulated wealth to charities or the needy (a practice known as zakat), this is a significantly smaller proportion than is found among Muslims elsewhere in the Middle East and North Africa. A regional median of 79% of Muslims practice zakat, with rates of observance as high as nine-in-ten in Morocco (92%).

In the case of fasting during Ramadan, Israel’s Muslims also tend to be less observant. While 83% of Israeli Muslims do observe the ritual fast from dawn until dusk, this is a significantly smaller percentage than in Muslim-majority countries such as Morocco (98%) and Tunisia (96%). A median of 94% across the Middle East and North Africa say they fast during Ramadan.

In some cases, Israel’s Muslims are in sync with other Muslims in the region. For example, 97% of Israeli Muslims say they believe there is no god except Allah and that Muhammad is the prophet of Allah (two core beliefs that constitute the shahada, or profession of faith). This closely matches the nearly 100% of Muslims surveyed across the Middle East and North Africa who also embrace this central tenet of Islam.

Also, Israeli Muslims are somewhat more likely to observe the final pillar of Islam – the annual pilgrimage to Mecca – than Muslims in many nearby countries. Nearly a quarter (23%) of Israeli Muslims have made the hajj, compared with just a handful of Muslims in Morocco (6%) and Tunisia (4%). Possibly owing to proximity to Saudi Arabia, Israeli Muslims are about as likely as Muslims in Egypt (20%) and Lebanon (20%) to have completed the hajj.