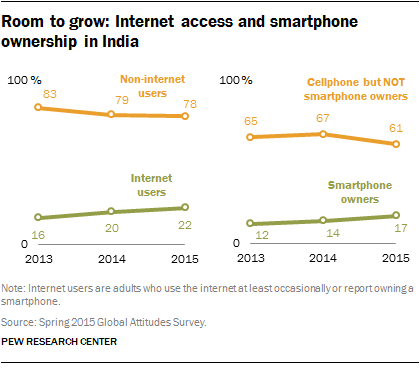 Only about a fifth of India’s roughly 1.2 billion people are online, according to a recent Pew Research Center report, and the world’s biggest technology companies are clamoring for this large, untapped user base. Facebook recently tried (and failed) to implement its “Free Basics” internet program, and Google is also vying for the vast Indian internet market. 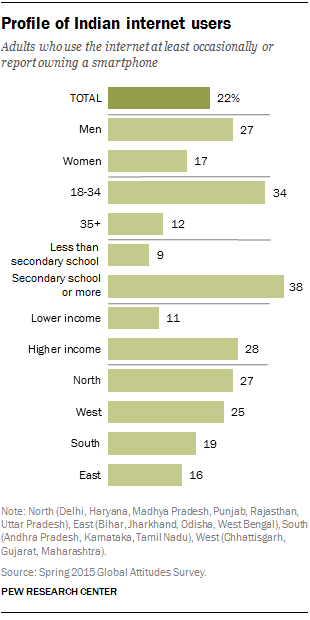 While the share of Indians with internet access has grown by only 6 percentage points since 2013, those who are online are increasingly likely to use the internet frequently. In 2015, 42% of Indian internet users accessed the web several times a day, compared with just 31% in 2014.

Like most of the 40 countries surveyed in 2015, there are big demographic differences in internet access. Younger, more-educated and higher-income Indians are more likely to use the web than older, less-educated and lower-income Indians (relative to the median household income within India). Men are also more likely to have access than women, as are Indians residing in the wealthier North and West regions of India where major cities like Delhi and Mumbai are located compared with the less prosperous South and East. Overall, these patterns hold true among India’s smartphone users as well.

There has not been any growth in cellphone ownership and minimal increases in smartphone ownership over the past two years. For many Indians, smartphones are still too expensive, an issue that some technology companies are trying to address, as evidenced by the recent buzz about a $4 smartphone launched in February this year. 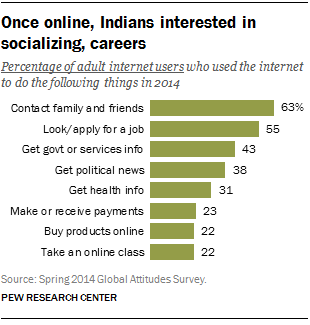 More broadly, in a 2014 survey we asked online Indians what types of activities they use the internet for. Majorities of internet users said they had used the web to stay in touch with family and friends and to search and apply for jobs in the past 12 months. At the time, fewer than a quarter of online Indians said they were engaging in commerce or taking a class, but roughly a third or more were getting information about health, government services or politics online.