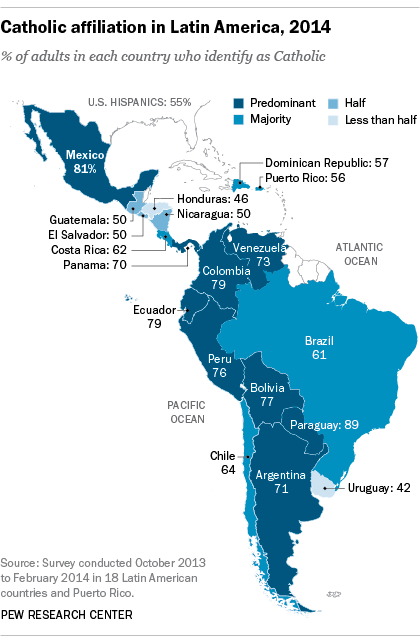 When Pope Francis, the first Latin American pontiff, arrives in Mexico this week, he will be visiting a country that is home to not only the largest Spanish-speaking population in the world, but one of the biggest Catholic populations, too. Indeed, Mexico has the globe’s second-largest number of Catholics, and a larger majority of Mexicans have remained tied to their Catholic faith compared with people in many other Latin American countries.

Across Latin America, the portion of people who identify as Catholic has declined considerably in recent decades, from at least 90% in the 1960s to 69% in 2014. This decline is largely due to widespread conversion to Protestant (and especially evangelical) denominations, as well as some people leaving organized religion altogether. But the trend away from Catholicism has been less pronounced in Mexico, where 81% of adults identify as Catholic today, compared with 90% who say they were raised Catholic, according to a 2014 Pew Research Center report. 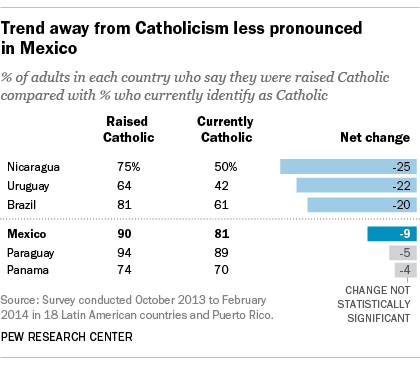 The decline in the percentage of Mexicans who identify as Catholic pales in comparison with some of Mexico’s neighbors in Central America, where in some cases the share of adult Catholics has fallen by more than twice the rate found in Mexico. Half of adults or fewer in Guatemala, Nicaragua, El Salvador and Honduras now identify as Catholic, while roughly four-in-ten in each country say they are Protestant. In Mexico, about one-in-ten adults were raised Catholic but no longer identify with Catholicism. By contrast, in Nicaragua, roughly a quarter of adults have left Catholicism after having been raised in the faith. 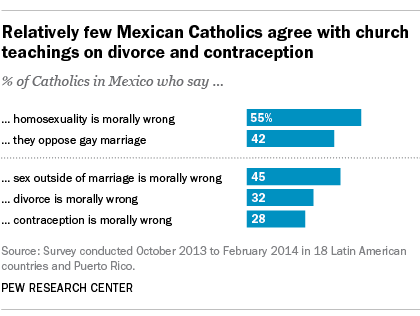 At the same time, Catholics in Mexico do not uniformly agree with Catholic Church teachings. Half of Mexican Catholics think gays and lesbians should be permitted to legally marry (a right that exists in certain parts of the country), compared with 42% who side with church policy and oppose gay marriage. Mexican Catholics lean in the opposite direction when homosexuality is framed in terms of morality: 55% say homosexual behavior is morally wrong (compared with 21% who say it is morally acceptable and 17% who say it is not a moral issue).

Even fewer Catholics in Mexico say sex outside marriage (45%), divorce (32%) and contraception (28%) are morally wrong – all of which are behaviors seen as sinful by the Catholic Church. In fact, most Mexican Catholics say the church should allow contraceptive use (66%) and divorce (60%), roughly similar to the shares of U.S. Hispanic Catholics who support these changes to church teachings.

But Mexican Catholics are more traditional in some other ways. Only about three-in-ten Catholics in Mexico say the church should allow priests to marry and women to become priests (31% each).

Mexican Catholics have very positive feelings toward Pope Francis – 86% saw him favorably when the survey was conducted in late 2013. But they are relatively unlikely to see his election as a “major change” for the Catholic Church. Only about half (48%) felt this way, compared with majorities of Catholics in most Latin American nations.

During his visit, Pope Francis is expected to authorize the use of indigenous languages during Mass. Some experts have pointed to Pentecostalism’s greater appeal to indigenous populations as one reason Catholicism has lost followers in Latin America. While the Pew Research Center has not asked Mexicans about the use of indigenous languages during Mass, we have found that 45% of Mexican Catholics report at least moderate levels of engagement with traditionally indigenous religious beliefs and practices, such as believing in the “evil eye” or making offerings to spirits.

In addition, immigration is expected to be a major theme of the pope’s trip, which will include meetings with Mexican President Enrique Peña Nieto and other public officials before concluding with a Mass near the U.S. border in Ciudad Juarez, Mexico. The trip comes as the Mexican government has increased enforcement at its southern border in response to a surge in Central American migrants, including families and children, traveling through Mexico to reach the U.S. While Mexican immigration to the U.S. has slowed dramatically, to the point that more Mexicans are leaving the U.S. than arriving there, fully a third of Mexicans say they would move to the U.S. if they had the opportunity and means to do so.

Violence and corruption also are expected to be major themes of the pope’s visit, and they are among the top concerns of the Mexican public, too. About seven-in-ten or more Mexicans say crime (74%), corrupt political leaders (72%) and drug-cartel related violence (71%) and are very big problems in their country.

But most Mexicans say religious leaders should not have an influence in politics (59%) and that religion should be kept separate from government policies (74%). On these questions, Mexico ranks among the more secular-minded nations in Latin America.