From the moon landings to Star Wars, Americans have long had a fascination with space and affection for NASA, but today’s public is divided on what role their government should play in future space exploration. 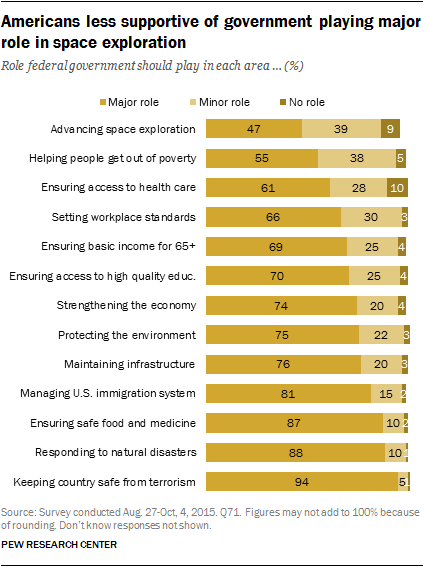 On the other hand, 47% of U.S. adults say the federal government should have a major role in advancing space exploration, making it the only area measured that does not have majority support for major government involvement. This stands in contrast to other issues such as curtailing terrorism, responding to natural disasters and ensuring food and medicine safety, for which a vast majority of Americans think government should be heavily involved.

These findings come at a time when there is increased privatization of routine space missions. Amazon founder Jeff Bezos’ company recently launched and landed a reusable rocket back to Earth for the first time, a feat that fellow billionaire Elon Musk is also attempting. (Beyond rockets, companies are also vying to make commercial space travel a reality for ordinary people.)

Unlike other areas where public opinion varies greatly by political leanings, there is little partisan difference on whether the federal government should play a major role in space exploration and only a modest partisan gap in how Americans evaluate the government’s performance in this area. 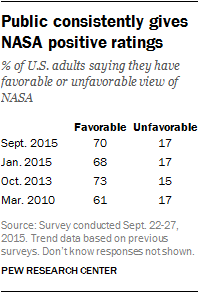 Despite mixed views on government performance and involvement in space exploration, the public is supportive of the National Aeronautics and Space Administration (NASA) and the International Space Station.

NASA is one of the most popular federal agencies — 70% of U.S. adults rate the agency favorably versus 17% who hold an unfavorable view. This popularity has been consistent across several Pew Research Center surveys. In comparison, fewer than half of Americans hold favorable opinions of the Justice Department, the Department of Education, the IRS or Veterans Affairs.

There is also broad support for the International Space Station, according to a 2014 Pew Research Center survey. Nearly two-thirds (64%) of U.S. adults said the space station has been a good investment for the country, while 29% said it was not.

Among NASA’s plans for the future is a mission to send humans to Mars by the 2030s to follow up on what has been learned from robotic explorers. While there has been debate on whether manned space missions are necessary, our 2014 survey found that 59% of Americans thought it was essential to include the use of human astronauts in the future of the U.S. space program.