As world leaders gather in Paris this week to fashion a global climate change accord, their citizens are sending them two different but not necessarily contradictory messages.

People in both rich and poor nations broadly favor their government signing an international agreement limiting greenhouse gas emissions from the burning of coal, natural gas and petroleum. But the degree of concern about climate change varies markedly from country to country. 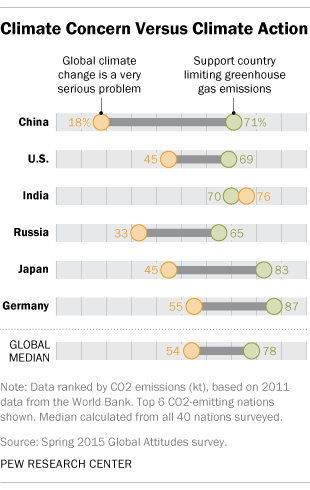 A new Pew Research Center survey finds there is a global consensus that climate change is a significant challenge. Globally, a median of 78% of people surveyed across 40 nations say they support their country signing an international agreement limiting greenhouse gas emissions. But a global median of just 54% consider climate change to be a very serious problem (a median of 85% say it is at least somewhat serious).

Nowhere is this differential between concern about the climate and support for action more striking than in China, the nation responsible for the greatest annual release of CO2 into the atmosphere. About seven-in-ten Chinese (71%) support an international treaty to curtail emissions, yet just 18% of the public expresses intense concern about climate conditions – a 53-percentage-point differential. These results suggest the Chinese government has general public support for its recent initiatives to deal with global warming even though the Chinese people are not intensely concerned about global warming.

The same pattern holds true for a number of other major carbon-emitting countries. This action-versus-concern gap is 38 percentage points in Japan and 32 points in Russia. In the U.S., just 45% think climate change is a very serious problem, but 69% back government action to curb emissions – a 24-point difference.

The differences between a relatively low perception of the climate challenge and public willingness to do something about it are even greater in other nations, of which some are big CO2 emitters and others are not. Israel (56 points) and Ukraine (48 points) are countries that are not among the top 20 CO2 emitters. But Poland (44 points) and South Korea (41 points) are.

Perhaps when it comes to climate change, people around the world are opting for the well-known principle: “Better safe than sorry.”