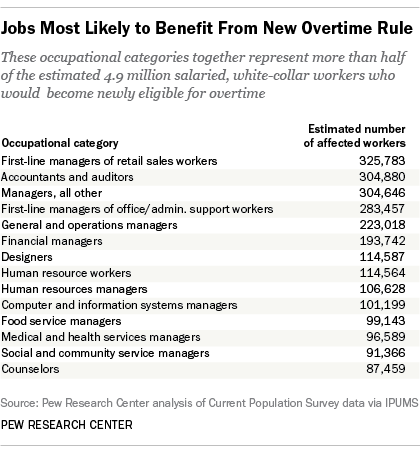 The Obama administration’s proposed overtime rules would make nearly 5 million white-collar workers newly eligible for time-and-a-half, according to a new Pew Research Center analysis. Most of them, we estimate, would be retail and food service managers, office administrators, low-level financial workers and other modestly paid managers and office professionals.

The rules governing who must be paid overtime for working more than 40 hours a week are many and subtle, but the general presumption in the law is that all workers are overtime-eligible unless they meet one of several specific exemptions. One of the most significant exemptions affects white-collar workers: They don’t have to be paid overtime if they meet all three of these tests: 1) They’re paid a fixed salary, as opposed to an hourly wage; 2) Their salary is more than a certain threshold amount; and 3) They primarily perform duties of a “bona fide executive, administrative, or professional” nature.

The overtime proposal, which was announced in late June and is open for comment until Sept. 4, wouldn’t change the first and third parts of that test. Nor would it affect any of the other exemptions, such as those for teachers and academic administrators, outside salespeople, and seasonal amusement park workers. It would, however, raise the salary threshold from $455 a week, or $23,660 for a full-year worker (the level since 2004), to the 40th percentile of earnings for all full-time salaried workers. The Labor Department estimates that by 2016, when the rule likely would take effect, the threshold would be around $970 a week or $50,440 a year; it also would be automatically updated each year, using either the Consumer Price Index or by maintaining it at a fixed percentile of wages.

The department argues in its rule-making release that the existing $455-a-week threshold is too low to screen out only those high-level employees that Congress meant to exempt from overtime. The proposal also is part of the administration’s efforts to address lagging middle- and working-class incomes. As President Obama commented last year, “If you’re making $23,000, typically, you’re not high in management. If your salary is even a dollar above the current threshold, you may not be guaranteed overtime. It doesn’t matter if what you do is mostly physical work like stocking shelves, it doesn’t matter if you’re working 50 or 60 or 70 hours a week – your employer doesn’t have to pay you a single extra dime. And I think that’s wrong. … If you’re working hard, you’re barely making ends meet, you should be paid overtime. Period. Because working Americans have struggled through stagnant wages for too long.”

But estimating how many white-collar workers would become overtime-eligible under the proposed rule, and what sorts of jobs they hold, is no easy task, even for the Labor Department itself. For our analysis, we used the IPUMS-CPS dataset, drawn from the U.S. Census Bureau’s Current Population Survey, a supplemental portion of which asks people about their incomes as well as their occupations, making estimation possible. (We didn’t attempt to model how employers might respond to the new rules.) 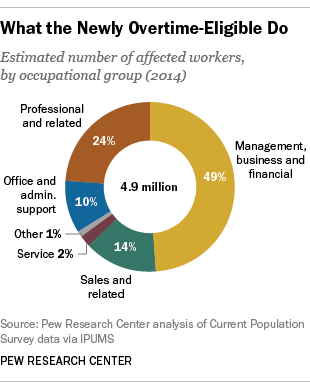 By our estimates, last year just under 4.9 million workers would have become newly eligible for overtime pay had the rule been in place. That’s somewhat more than the Labor Department’s estimate of 4.65 million, though they used pooled 2011-13 data and a more detailed methodology. (Other estimates of the number of affected workers range from 3 million, by the American Action Forum, to 5.9 million, by the Institute for Women’s Policy Research.)

Although the 4.9 million employees in our estimate worked in more than 150 separately defined occupations, just 14 occupations accounted for more than half the estimated impact. Those range from the to-be-expected (retail, food service and office managers of various sorts) to the somewhat surprising (designers, accountants and auditors).

Looking at broader occupational groups, more than 440,000 workers in computer and mathematical occupations would become overtime-eligible, as would more than 175,000 people working in community and social service occupations and more than 150,000 health care workers.