The debate over the safety of genetically modified foods has put state lawmakers who favor requiring labeling of these products at odds with counterparts in Congress who oppose it. Americans’ concerns about GM foods are providing the backdrop: A majority of them believe such foods are generally unsafe to eat.

The House last month passed a bill that would nullify any state laws that require labeling, dealing a blow to state lawmakers and advocates who support such a move. A similar bill has yet to be introduced in the Senate. This comes after three states – Vermont, Connecticut and Maine – passed legislation this year making GM food labeling mandatory; dozens of other states are exploring similar bills on the issue.

As this issue plays out on Capitol Hill, polls show that a majority of Americans support labeling genetically modified foods, and half check for GM food labels while shopping.

More than half (57%) of U.S. adults believe that GM foods are generally unsafe to eat, while 37% say these foods are safe, according to a Pew Research Center survey. Women are more likely than men to view GM foods as unsafe (65% vs. 49%). Opinions also vary by race and ethnicity; blacks and Hispanics are more likely than whites to say that genetically modified foods are generally unsafe to eat.

The Pew Research survey also found differences in views based on education levels and science knowledge. Those with lower levels of educational attainment or science knowledge are more inclined to view GM foods as unsafe. 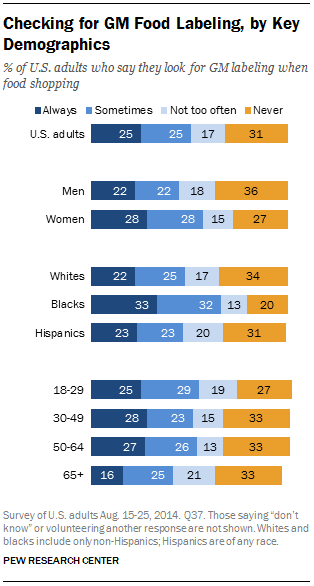 These opinions stand in contrast with those of American Association for the Advancement of Science members surveyed, who by a wide margin (88%) say GM foods are generally safe to eat, with only 11% of this group describing such foods as unsafe. But most Americans aren’t sold on the idea that scientists have a full understanding of the safety of GM foods. Two-thirds (67%) of U.S. adults believe scientists do not have a clear understanding of the health effects associated with genetically modified crops, compared with 28% who say scientists do have strong knowledge of the issue.

For some, checking for GM food labels is something they routinely do. Half of the public say they at least sometimes look for GM labeling when food shopping, including a quarter who say they always do so.

In general, those who consider GM foods unsafe check for GM food labels more often: 35% of this group always looks to see if products are genetically modified, compared with 9% among those who consider such foods generally safe to eat.

Some two-thirds of U.S. adults say they support labeling genetically modified foods, including 39% who strongly favor this action, according to an Associated Press/GfK poll conducted in December 2014. One-quarter (24%) of Americans are neutral on the issue, while 7% are opposed to labeling GM foods. This support is consistent with a 2013 New York Times/CBS News survey, in which 93% of respondents said foods containing genetically modified ingredients should be labeled.