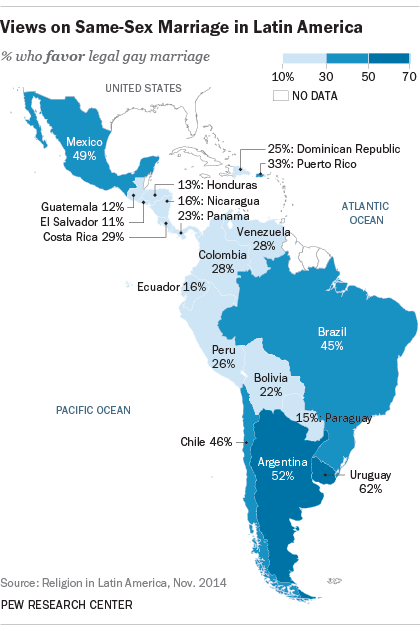 While laws allowing same-sex marriage have become more common in European countries and in U.S. states, gay marriage advocates also have gained ground in some parts of Latin America. Most recently, the Mexican Supreme Court issued a ruling making it much easier for gay and lesbian couples to wed.

The Mexican high court decision gave same-sex couples the right to seek a court injunction against state laws banning gay marriage, but it did not technically legalize same-sex unions nationwide. (Gay marriage is currently legal in just a few Mexican states and jurisdictions.)

Still, the ruling is a major step toward full legalization, which would mean same-sex marriage would be legal in three of Latin America’s four most populous countries – Brazil, Mexico and Argentina – in addition to tiny Uruguay. Among the world’s major regions, only Europe has more countries permitting legal gay marriages.

At the same time, strong conservative social views in many Latin American countries mean that this legal trend may not be primed to spread through the region in the near future.

Among countries where gay marriage is legal, Uruguay is the only place where a majority of the public (62%) supports allowing gay and lesbian couples to marry legally. About half of Argentinians and Mexicans favor gay marriage, while support for allowing same-sex couples to legally wed stands at 45% in Brazil, according to a Pew Research Center survey of Latin America conducted in 2013 and 2014.

In a majority of countries across the region, one-third of adults or fewer favor legal gay marriage, while more than 60% oppose it. For example, 80% of Paraguayans, 74% of Ecuadorians and 64% of Colombians say they oppose same-sex marriage. In much of Central America, opposition also is particularly strong: Roughly three-quarters or more of Hondurans, Guatemalans, Salvadorans and Nicaraguans are against gay marriage.

Aside from those nations that already have legalized gay marriage, Chile is the country most supportive of the idea, yet public opinion on the issue remains divided there. Fully 46% of Chileans favor allowing gay and lesbian couples to wed, compared with 42% opposed. Earlier this year, Chile enacted a law recognizing civil unions (although not full marriage rights) for same-sex couples; Colombia and Ecuador also recognize some form of legal partnerships for gay and lesbian couples.

Across Latin America, the growing Protestant population is more opposed to same-sex marriage than are Catholics or people who say they are unaffiliated with any religion (religious “nones”). While the vast majority of Mexicans are Catholic (81%), the religious divide on the issue is apparent – 50% of Mexican Catholics favor legal gay marriage, compared with 35% of Protestants and 65% of the religiously unaffiliated. Roughly one-in-ten or fewer Mexicans are Protestant (9%) or unaffiliated (7%).

As is the case in many countries, younger Mexicans are far more likely to favor same-sex marriage than older age groups; 63% of Mexicans ages 18 to 34 voice support for gay marriage, compared with 40% of those 35 and older.