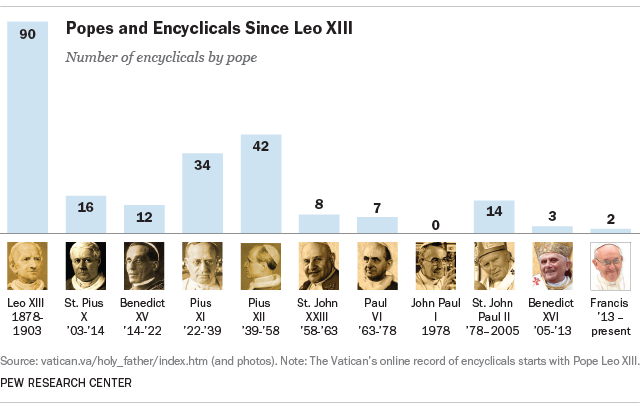 It’s not surprising that Pope Francis’ upcoming encyclical on climate change has already generated a lot of attention in the media and elsewhere, given the stature of his office and his sky-high popularity – not to mention the politically polarizing nature of the subject matter.

The upcoming encyclical, which is scheduled to be released on June 18, is the first by a pope to directly address an environmental issue. Francis’ only previous encyclical, Lumen Fidei (“The Light of Faith”), was issued on June 29, 2013, and concerned the nature of religious faith.

Encyclicals are papal letters – the word “encyclical” means “circular letter” – usually addressed to Catholic clergy and the laity and containing the pope’s views on church teachings and doctrine in a particular area. While encyclicals do not set down new church doctrine (the Roman Catholic Church’s core beliefs), they are in essence official statements and are considered authoritative teaching, since popes speak for the church.

Popes have other ways to communicate, such as apostolic exhortations (which urge faithful Catholics to take certain actions) or homilies and sermons. But encyclicals carry particular weight because they are formal documents.

Popes have written encyclicals on an array of topics, ranging from the nature of work to the virginity of Jesus’ mother, Mary. Some of the more famous encyclicals include Pope Paul VI’s Humanae Vitae (“Of Human Life”), which reaffirms the church’s teaching on birth control and premarital sex, and Pope John Paul II’s Veritatis Splendor (“The Splendor of Truth”), which speaks to humanity’s ability to understand and know moral truth.

While popes have been writing letters to the faithful since the early days of the church, the first pope to issue an encyclical (and call it such) was Benedict XIV, who released Ubi Primum (“On the Duty of Bishops”) in 1740. Since then, nearly 300 “circular letters” have been issued.

Almost a third of all encyclicals (90) were written by one pope, Leo XIII, who led the church from 1878 to 1903. Leo’s most famous encyclical, Rerum Novarum (“Of Revolutionary Change”), laid out church teachings on economic issues as well as church-state relations and is widely seen as the foundational document of modern Catholic social teaching.

With two encyclicals under his belt in a little more than two years as pope, Francis is on pace to be more productive in this area (on a per-year basis) than his immediate predecessors, Popes Benedict XVI and John Paul II. Benedict, for example, issued only three encyclicals in his eight years as pontiff. But Francis will need to pick up the pace if he hopes to compete with Leo XIII, or even Popes Pius XII (42 encyclicals) or Pius XI (34).