When President Obama joins 34 other heads of state from North America, Central America, South America and the Caribbean this week in Panama City for the seventh Summit of the Americas, he’ll be doing so at a time when the United States’ image in the region is largely positive.

The year’s agenda will include discussion of improved cooperation between Western hemisphere nations, a topic epitomized by the first-ever invitation for Cuba to participate in the meeting and the U.S. restoring diplomatic ties with the island. The move garnered praise from leaders throughout Latin America. 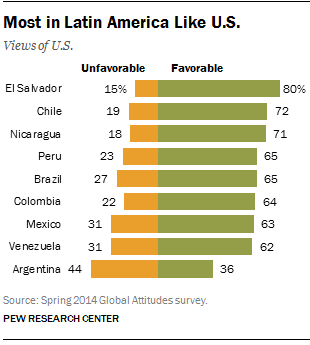 A 2014 Pew Research Center survey of 43 countries around the world showed that a median of 65% of people in Latin America had a positive view of the U.S. While not quite as positive as attitudes toward America in Africa (74%), this level of approval is on par with views in Europe (66%) and Asia (66%) and much higher than in the Middle East (30%). The survey was conducted last spring before Obama’s diplomatic opening to Cuba.

Majorities in all but one of nine Latin American countries surveyed view the U.S. favorably. Attitudes toward the U.S. have remained positive or grown more favorable in four countries Pew Research surveyed in both 2007 and 2014. In 2007, a majority of Chileans (55%) said they had a favorable view of the U.S. This number jumped to 72% in 2014, an increase of 17 percentage points. And in Argentina, the Latin American country most critical of the U.S., favorable views have jumped 20 points, from only 16% in 2007 to 36% now. The change has been less marked in Mexico, where favorable opinions of the U.S. have increased by 7 percentage points (56% favorable in 2007 vs. 63% in 2014). Favorable views of the U.S. in Peru remained steady, going from 61% in 2007 to 65% in the latest survey.

The young, the wealthy and those with more education tend to hold more pro-American sentiment in most Latin American nations surveyed. In Peru, three-quarters of those ages 18 to 29 give the U.S. positive marks, compared with 58% of those ages 50 and older. Nearly seven-in-ten Colombians (69%) with higher incomes say they favor the U.S., while only 55% with lower incomes agree. And in Venezuela, a country whose relationship with the U.S. has been tumultuous at times, the U.S. enjoys better reviews from those with more education (72%) than people who hold less than a secondary education (58%).

The U.S.’s image in Latin America is generally more positive than China’s, a country that is investing heavily throughout the region. For example, in Brazil, where China has aggressively pursued infrastructure projects, 44% of Brazilians have a favorable view toward China. This is 21 percentage points lower than positive opinions of the U.S. (65% favorable). Similarly, pro-American disparities can also be seen in Chile, Colombia, El Salvador, Mexico, Nicaragua and Peru.

Yet in Venezuela, where China recently invested $20 billion, favorable attitudes toward the U.S. and China are more even (62% vs. 67%, respectively). A similar split can be found in Argentina – another country receiving billions of dollars from China for infrastructure. While 40% of Argentines view China positively, 36% say the same about the U.S.