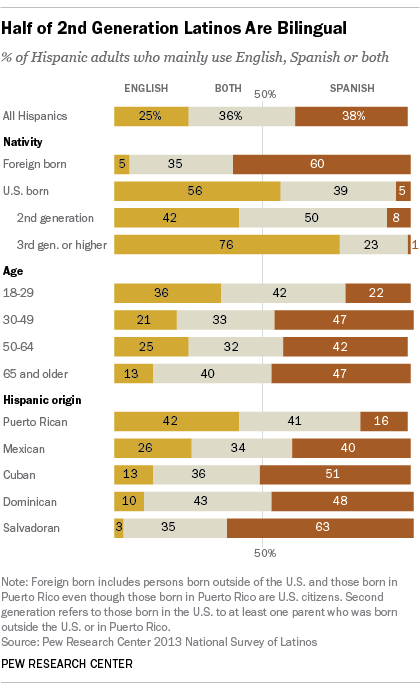 Latino adults who are the children of immigrant parents are most likely to be bilingual. Among this group, 50% are bilingual, according to our 2013 survey. As of 2012, Latinos with immigrant parents (defined as those born outside the U.S. or those born in Puerto Rico) made up roughly half (48%) of all U.S.-born Hispanics. By comparison, a third (35%) of Hispanic immigrants are bilingual, as are a quarter (23%) of those with U.S.-born parents.

Widespread bilingualism has the potential to affect future generations of Latinos, a population that is among the fastest growing in the nation. Our 2011 survey showed that Latino adults valued both the ability to speak English and to speak Spanish. Fully 87% said Latino immigrants need to learn English to succeed. At the same time, nearly all (95%) said it is important for future generations of U.S. Hispanics to speak Spanish.

Bilingualism is measured in our National Surveys of Latinos by asking Hispanic adults to self-assess their language abilities. Respondents rated their ability to carry on a conversation in Spanish and how well they can read a book or newspaper written in Spanish. The same questions are posed about their English-speaking ability. Bilingualism is linked to age. Some 42% of Hispanics ages 18 to 29 are bilingual. That share falls to about a third among Hispanics ages 30 to 49 and ages 50 to 64, but rises again, to 40%, among those ages 65 and older.

Due in part to bilingualism, in 2013 Spanish was the most spoken non-English language in the U.S., used by 35.8 million Hispanics in the U.S. plus an additional 2.6 million non-Hispanics. Overall, three-in-four Hispanics (73%) ages 5 and older speak Spanish in their homes, when including those who are bilingual.

Given the expected demographic changes, what is the future of language use among Hispanics in the United States? According to Census Bureau projections, the share of Hispanics who speak only English at home will rise from 26% in 2013 to 34% in 2020. Over this time period, the share who speak Spanish at home will decrease from 73% to 66%.

And as a sign of the times, Spanglish, an informal hybrid of both languages, is widely used among Hispanics ages 16 to 25. Among these young Hispanics, 70% report using Spanglish, according to an analysis we did in 2009..