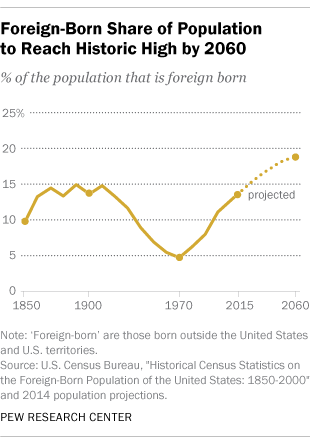 The nation’s foreign-born population is projected to reach 78 million by 2060, making up 18.8% of the total U.S. population, according to new Census Bureau population projections. That would be a new record for the foreign-born share, with the bureau projecting that the previous record high of 14.8% in 1890 will be passed as soon as 2025.

Yet while Asian and Hispanic immigrants are projected to continue to be the main sources of U.S. immigrant population growth, the new projections show that the share of the foreign born is expected to fall among these two groups. Today, 66.0% of U.S. Asians are immigrants, but that share is predicted to fall to 55.4% by 2060. And while about a third of U.S. Hispanics (34.9%) are now foreign-born, the Census Bureau projects that this share too will fall, to 27.4% in 2060. These declines are due to the growing importance of births as drivers of each group’s population growth. Already, for Hispanics, U.S. births drive 78% of population growth. 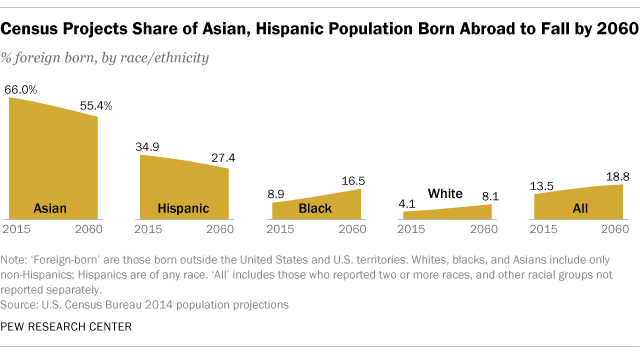 The U.S. today has more immigrants than any other nation. As the nation’s immigrant population grows, so too will the number of children who have at least one immigrant parent. As of 2012, these second generation Americans made up 11.5% of the population, and that share is expected to rise to 18.4% by 2050, according to Pew Research Center projections.