In the early 1960s, South Korea had a per-capita gross domestic product comparable to that of Sierra Leone. Now, it is the 14th largest economy, but all that seems to mean little to the country’s next generation.

South Korea’s Millennials – whom we define as young people who came of age politically, economically and socially as the new millennium began – have a particularly dark view of the future, especially when compared with their counterparts around the world. In 2014, Millennials ranged in age from 18 to 33. (While some commentators have used the “Millennial” label to describe young adults in South Korea, the term is not as ubiquitous as it is in the U.S. For more on American Millennials, who are also defined by their shared cultural and historical experience, see the Pew Research Center’s extensive research.) 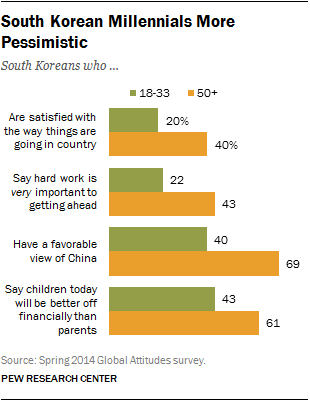 South Korean Millennials are downbeat about their country’s direction, doubtful of the future and pessimistic about their country’s relationship with China. South Korea is the only country in the Pew Research Center’s spring 2014 survey where young people were less likely than those ages 50 and older to say children in South Korea today will be better off financially than their parents. And despite ranking among the world’s leaders in student performance in math, science and reading, few South Korean Millennials see education and hard work as the way to get ahead in life.

In every other country surveyed in 2014 by the Pew Research Center, people ages 18 to 33 were either more likely to say future generations will be better off or that there was no difference between Millennials and those ages 50 and older. In Thailand and Japan, young people were more likely than older generations to look confidently upon the financial future of their children. South Korean Millennials are the only young people less likely than their elders to say the next generation will be better off.

Few countries compare with South Korea in terms of educational attainment, and the country’s culture is known for putting intense pressure on students to excel academically. In 2010, South Korea spent 7.6% of GDP on education, trailing only Denmark and Iceland among Organization for Economic Cooperation and Development members on educational expenditure. South Korea also has the highest percentage of 25- to 34-year-olds with a college or vocational degree and ranks among the top 10 (well above the U.S.) in science and math scores internationally.

One other generational shift found among South Korean Millennials is how they differ with their elders when it comes to views of China and Japan.

One area where South Korean Millennials are less pessimistic than older generations is when it comes to their country’s historic nemesis: Japan. Lasting bitterness over Japan’s occupation of South Korea during the first half of the 21st century, as well as the resurgence of a territorial dispute over a group of islands between the two countries, has stoked negative attitudes between the two neighbors. However, there is a slight generational difference in attitudes toward Japan. Only 14% of those ages 50 and older have a favorable opinion of Japan. That number jumps to 30% among those ages 18 to 33.