It’s been seven decades since the end of the Holocaust, an event that decimated the Jewish population in Europe. In the years since then, the number of European Jews has continued to decline for a variety of reasons. And now, concerns over renewed anti-Semitism on the continent have prompted Jewish leaders to talk of a new “exodus” from the region.

There are still more than a million Jews living in Europe, according to 2010 Pew Research Center estimates. But that number has dropped significantly over the last several decades – most dramatically in Eastern Europe and the countries that make up the former Soviet Union, according to historical research by Sergio DellaPergola of the Hebrew University of Jerusalem.

In 1939, there were 16.6 million Jews worldwide, and a majority of them – 9.5 million, or 57% – lived in Europe, according to DellaPergola’s estimates. By the end of World War II, in 1945, the Jewish population of Europe had shrunk to 3.8 million, or 35% of the world’s 11 million Jews. About 6 million European Jews were killed during the Holocaust, according to common estimates.

Since then, the global Jewish population – estimated by Pew Research at 14 million as of 2010 – has risen, but it is still smaller than it was before the Holocaust. And in the decades since 1945, the Jewish population in Europe has continued to decline. In 1960, it was about 3.2 million; by 1991, it fell to 2 million, according to DellaPergola’s estimates. Now, there are about 1.4 million Jews in Europe – just 10% of the world’s Jewish population, and 0.2% of Europe’s total population.

Measuring Jewish populations, especially in places like Europe and the United States where Jews are a small minority, is fraught with difficulty. This is due to the complexity both of measuring small populations and of Jewish identity, which can be defined by ethnicity or religion. As a result, estimates vary, but Pew Research’s recent figures are similar to those reported by DellaPergola, one of the world’s leading experts on Jewish demography. 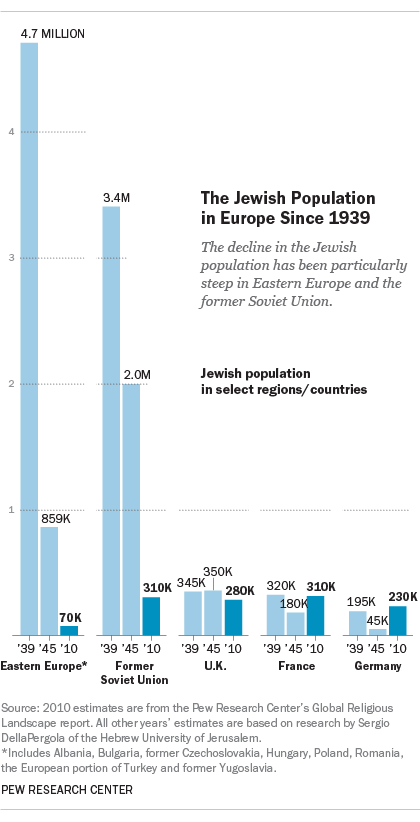 In Eastern Europe, a once large and vibrant Jewish population has nearly disappeared. DellaPergola estimates that there were 3.4 million Jews in the European portions of the Soviet Union as of 1939. Many were killed in the Holocaust, and others moved to Israel or elsewhere. Today, a tiny fraction of the former Soviet republics’ population – an estimated 310,000 people – are Jews.

Similar trends have occurred in Eastern European countries that were outside the USSR, including Poland, Hungary, Romania and several other nations. Collectively, they were home to about 4.7 million Jews in 1939, but now there are probably fewer than 100,000 Jews in all these countries combined.

Much of the postwar decline has been a result of emigration to Israel, which declared its independence as a Jewish state in 1948. The Jewish population of Israel has grown from about half a million in 1945 to 5.6 million in 2010. But there are other possible factors in the decline of European Jewry, including intermarriage and cultural assimilation.

In addition, Jewish populations have not decreased uniformly in every European country. For example, we estimate that there were about as many Jews in France as of 2010 (310,000) as DellaPergola estimates there were in 1939 (320,000), although recent reports have indicated a surge in Jewish emigration from France.

The United Kingdom also continues to have a significant Jewish population (about 280,000 in 2010, down from DellaPergola’s estimate of 345,000 in 1939). But a new report released this week found a record level of anti-Semitism in the U.K., with more than 1,000 anti-Semitic incidents recorded in 2014.