One of the first decisions that had to be made in conducting this study and analyzing its results was to answer the question, “Who is a Jew?” This is an ancient question with no single, timeless answer. On the one hand, being Jewish is a matter of religion – the traditional, matrilineal definition of Jewish identity is founded on halakha (Jewish religious law). On the other hand, being Jewish also may be a matter of ancestry, ethnicity and cultural background. Jews (and non-Jews) may disagree on where to draw the line. Is an adult who has Jewish parents but who considers herself an atheist nevertheless Jewish, by virtue of her lineage? What about someone who has Jewish parents and has converted to Christianity? Or someone who has no known Jewish ancestry but is married to a Jew and has come to think of himself as Jewish, though he has not formally converted to Judaism?

Various readers will have their own answers to these questions. The approach taken in this survey was to cast the net widely, seeking to interview all adults who answer an initial set of questions (the “screener”) by saying (a) that their religion is Jewish, or (b) that aside from religion they consider themselves to be Jewish or partially Jewish, or (c) that they were raised Jewish or had at least one Jewish parent, even if they do not consider themselves Jewish today. Anyone who said “yes” to any of these questions was eligible for the main interview, which included many more questions detailing religious beliefs and practices; denominational affiliations such as Reform, Conservative and Orthodox; synagogue and Jewish community connections; the religious affiliation of parents, spouses, partners and children in the home; attitudes toward Jewish identity; social and political views; and demographic measures such as age and education. This wide-net approach gives readers (and scholars who later conduct secondary analysis of the survey data) a great deal of flexibility to apply whatever definitions of “Jewish” they think are appropriate.

This report analyzes the survey data using four main categories. These are defined to be as consistent as possible with previous major surveys of U.S. Jews (e.g., by counting as Jewish not just religious Jews but also people of Jewish upbringing, even if they are not religious) while still making intuitive sense to a general U.S. audience (e.g., by not counting as Jewish anyone who describes him/herself as a Christian or who does not consider him/herself Jewish). The categories are:

These first two groups constitute, for the purposes of this analysis, the “net” Jewish population. In addition, the survey interviewed: 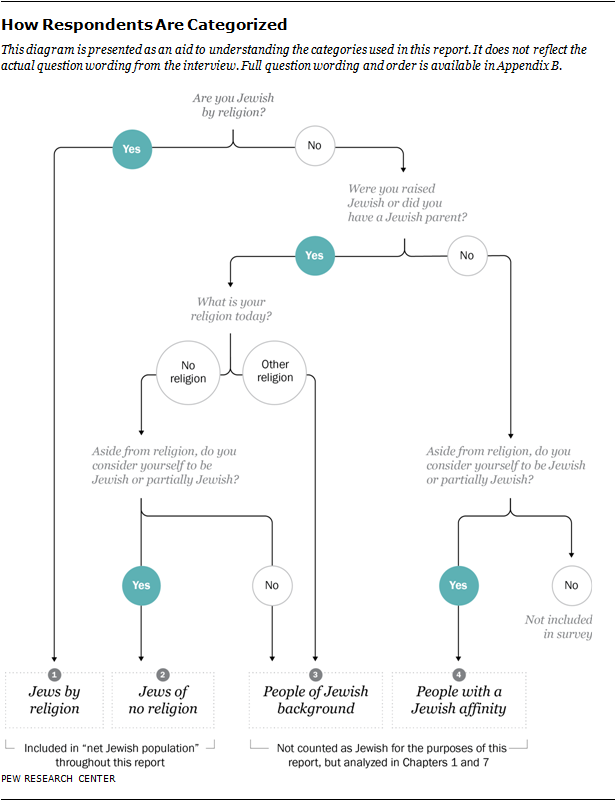