The size of the U.S. Jewish population has been a matter of lively debate among academic experts for more than a decade. Because the Pew Research survey involves a representative sample of Jews, rather than a census of all American Jews, it cannot definitively answer the question. However, data from the survey can be used to derive a rough estimate of the size of the U.S. Jewish population. Perhaps even more valuably, the survey illuminates the many different ways in which Americans self-identify as Jewish or partially Jewish, and it therefore provides a sense of how the size of the population varies depending on one’s definition of who is a Jew. 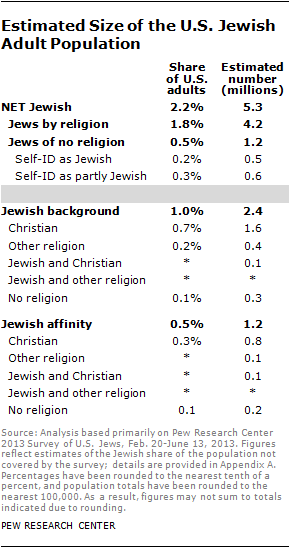 If Jewish refers only to people whose religion is Jewish (Jews by religion), then the survey indicates that the Jewish population currently stands at about 1.8% of the total U.S. adult population, or 4.2 million people. If one includes secular or cultural Jews – those who say they have no religion but who were raised Jewish or have a Jewish parent and who still consider themselves Jewish aside from religion – then the estimate grows to 2.2% of American adults, or about 5.3 million. For the purposes of the analysis in this report, these two groups make up the “net” Jewish population.

Narrower or broader definitions would result in smaller or larger numbers. For example, if one were to exclude adults who self-identify as only “partly” Jewish, the 5.3 million figure would decrease by about 600,000, to approximately 4.7 million.

Alternatively, one could define Jewish more expansively, to include all Americans who have at least one Jewish parent or were raised Jewish, regardless of whether they now have another religion, such as Christianity. In that case, the survey suggests the total adult Jewish population (including all Jews by religion, Jews of no religion and people of Jewish background) would make up about 3.3% of American adults, or approximately 7.8 million people. If one were to adopt an even broader definition of Jewish identity and include all Americans who say they consider themselves Jewish for any reason – even if they do not have direct Jewish ancestry – the survey indicates the adult Jewish population would be roughly 3.8% of the overall adult population, or about 9.0 million people.

These are just a few of the many ways that data from the Pew Research survey could be used to generate differing population figures, depending on whom one counts as Jewish. One other common definition should be mentioned, though it is not shown in the accompanying tables: In traditional Jewish law (halakha), Jewish identity is passed down through matrilineal descent, and the survey finds that about 90% of Jews by religion and 64% of Jews of no religion – a total of about 4.4 million U.S. adults – say they have a Jewish mother. Additionally, about 1.3 million people who are not classified as Jews in this report (49% of non-Jews of Jewish background) say they have a Jewish mother.7 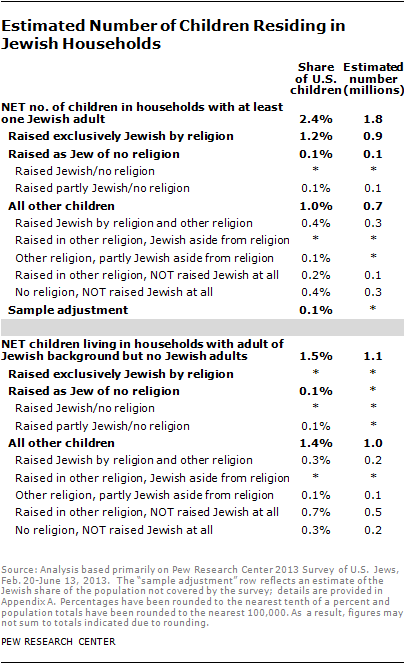 Combining 5.3 million adult Jews (the estimated size of the net Jewish population in this survey) with 1.3 million children (in households with a Jewish adult who are being raised Jewish or partly Jewish) yields a total estimate of 6.7 million Jews of all ages in the United States (rounded to the nearest 100,000).

Using a more expansive definition, one could add children living in households with at least one adult of Jewish background. This could include approximately 200,000 children who are being raised both Jewish by religion and in another religion, as well as roughly 100,000 children who are being raised in another religion and partly Jewish aside from religion. In that case, the 6.7 million estimate would rise to about 7.0 million.

On the other hand, if one were to take a more restrictive definition and exclude children who are being raised only partly Jewish as well as adults who identify as only partly Jewish, the 6.7 million figure would decline by about 900,000, to approximately 5.7 million.

For an explanation of how the estimates are calculated (including adjustments for areas of the country not covered by the survey, people in institutionalized settings such as nursing homes and prisons, and people unable to take a telephone survey in either English or Russian), see Appendix A: Survey Methodology (PDF).

How Do These Estimates Compare With Previous Estimates?

Comparisons between surveys of U.S. Jews are complicated by differences in their sampling methods, question wording and definitions of who counts as Jewish. Probably the most frequently cited previous estimate of the size of the American Jewish population is from the 2000-2001 National Jewish Population Survey, which came up with a figure of 5.2 million adults and children in the “core” Jewish population. The NJPS population estimate, however, is not directly comparable to the population estimates in the Pew Research survey, for several reasons. Perhaps most important, some experts think the NJPS substantially undercounted the number of Jews in America; it became the subject of heavy criticism on methodological grounds, several reassessments and continuing academic controversy.9 In addition, the definitions of some of the Jewish population categories in the NJPS differ from the definitions of the corresponding categories in the current survey.10

Perhaps the most widely accepted prior estimate of the number of Jews by religion in America comes from the 1957 Current Population Survey, the only time in the last six decades that the U.S. Census Bureau has asked individual Americans about their religious affiliation. It found that Jews made up about 3.2% of Americans ages 14 and older, or about 3.9 million people in 1957. Surveys conducted by Gallup and the American National Election Studies (ANES) in the 1950s and 1960s also consistently found that 3-4% of American adults said their religion was Jewish. How many Americans considered themselves Jewish aside from religion in the 1950s and 1960s is not known, however, because the question was not asked in large-scale surveys at that time.

Since 2000, the share of American adults who say their religion is Jewish has generally ranged between 1.2% and 2% in national surveys. Using a variety of techniques, leading scholars have synthesized data from different sources to produce additional estimates: 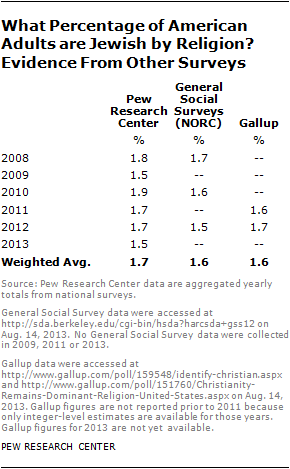 The estimate from the new Pew Research survey that there are approximately 5.3 million “net” Jewish adults and 1 million children who are being raised exclusively as Jewish (or 1.3 million children being raised at least partly Jewish) falls roughly in the middle of these prior estimates – somewhat higher than DellaPergola’s numbers, somewhat lower than the Dashefsky-Sheskin figure and fairly close to the Saxe-Tighe estimates.

The estimate that Jews by religion make up 1.8% of U.S. adults also is consistent with the results of Pew Research surveys over the past five years and close to the findings of other recent national surveys (such as Gallup polls and the General Social Surveys conducted by the independent research organization NORC at the University of Chicago) that use similar, close-ended questions about religious affiliation.11 In aggregated Pew Research polling, the Jewish by religion share of the population has ranged in recent years between 1.5% (in 2009) and 1.9% (in 2010). GSS estimates have ranged from 1.5% (in 2012) to 1.7% (in 2008). Combining its own surveys conducted since 2008, Pew Research finds that a weighted average of 1.7% of U.S. adults identify as Jews by religion, while the GSS and Gallup find 1.6% identifying as Jews by religion.

Trends in the Size of the Jewish Population

Using the 1957 Current Population Survey as a benchmark, it appears that the number of adult Jews by religion rose about 15% over the last half-century, while the total U.S. population more than doubled over the same period.12 As a result, national surveys that repeatedly have asked Americans about their religion (Gallup, the American National Election Studies, the General Social Surveys and the American Religious Identification Surveys) show a decline, over the long term, in the percentage of U.S. adults who say their religion is Jewish, though the Jewish share of the adult population appears to have held fairly steady in the past two decades.13 (See charts below.)

The long-term decline in the Jewish by religion share of the population results partly from differences in the median age and fertility of Jews compared with the public at large. As early as 1957, Jews by religion were significantly older and had fewer children than the U.S. population as a whole. At that time, the median age of Jews older than age 14 was 44.5 years, compared with 40.4 years among the population as a whole, and Jewish women ages 15-44 had 1.2 children on average, compared with 1.7 children among this age group in the general public.14 Today, Jews by religion still are considerably older than U.S. adults as a whole, although they are similar to the general public in the number of children ever born. (See discussion of median age and fertility in the Age and Fertility sections in Chapter 2.)

Migration also is a factor. The growth in the overall U.S. population has been driven in part by Hispanic immigration, and the percentage of Jews by religion among Hispanics is even lower than in the general public. On the other hand, there have been two major waves of Jewish immigrants from the former Soviet Union in recent decades, and as a result, the share of Jewish adults who are foreign-born today (14%) is only a little lower than the share of all U.S. adults who are foreign born (17%). (For more details on Jewish immigrants, see the table on Ancestry and Place of Birth in Chapter 2.)

But demographics are not the only explanation for the long-term decline in the share of Americans who say their religion is Jewish. Jews by religion also have lost more people than they have gained due to religious switching. The new Pew Research survey finds that, by a two-to-one margin, former Jews by religion outnumber those who have become Jewish by religion after not having been raised Jewish. 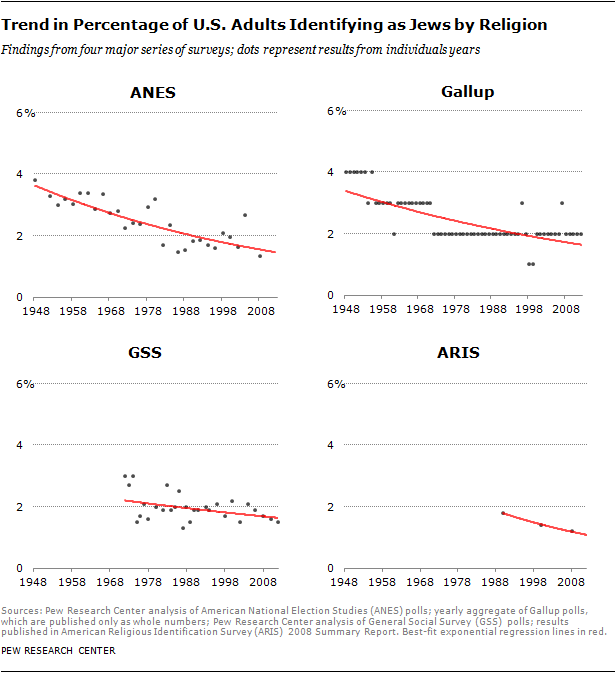 Growth of Jews of No Religion 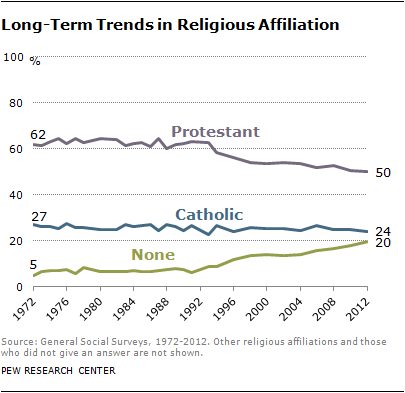 The increase in Jews of no religion appears to be part of a broader trend in American life, the movement away from affiliation with organized religious groups. Surveys by Pew Research and other polling organizations have shown a decline in the percentage of U.S. adults who identify with Protestant denominations and a rapid rise, beginning in the 1990s, in the number of Americans who do not identify with any religion. This group, sometimes called the “nones,” now stands at about 20% of the U.S. public, including roughly a third of adults under 30. (For more information on these broad trends in American religion, including sociological theories about the root causes of disaffiliation, see the Pew Research Center’s October 2012 report “ ‘Nones’ on the Rise.”)

Next: Chapter 2: Intermarriage and Other Demographics
← Prev Page
Page1Page2You are reading page3Page4Page5Page6Page7Page8Page9Page10
Next Page →

A Portrait of Jewish Americans Sidebar: Who is a Jew?
Chapter 1: Population Estimates
Jewish AdultsJewish ChildrenHow Do These Estimates Compare With Previous Estimates?Trends in the Size of the Jewish PopulationGrowth of Jews of No Religion
Chapter 2: Intermarriage and Other Demographics Chapter 3: Jewish Identity Chapter 4: Religious Beliefs and Practices Sidebar: Making Comparisons with the 2000-2001 National Jewish Population Survey (NJPS) Chapter 5: Connection With and Attitudes Toward Israel Chapter 6: Social and Political Views Chapter 7: People of Jewish Background and Jewish Affinity