For the first time on record, more non-Mexicans than Mexicans were apprehended at U.S. borders in 2014 by the Border Patrol, according to a Pew Research Center analysis of more than 60 years of Border Patrol data. This shift is another sign that unauthorized immigrants from Mexico are crossing the U.S.-Mexico border significantly less often than they did before the Great Recession. 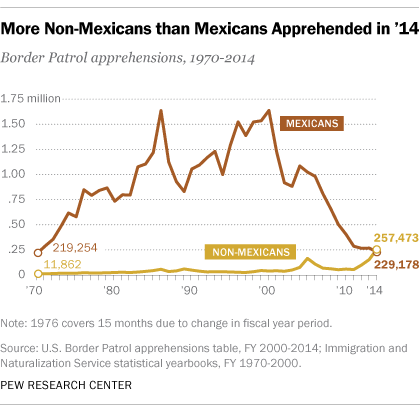 The recent increase in non-Mexican apprehensions is due in part to a surge in unaccompanied Central American child migrants crossing the border without their parents. In fiscal year 2014, nearly 52,000 unaccompanied children from El Salvador, Guatemala and Honduras were apprehended at the U.S.-Mexico border, more than double the total from the previous year, according to U.S. Customs and Border Protection data. By contrast, the number of unaccompanied Mexican children apprehended slightly declined over the same time period, from 17,000 to 16,000.

Although investments by the U.S. federal government on border security have increased and migration has slowed, the U.S. public has put a greater emphasis on border security. From February 2013 to August 2014, the share of Americans who said the priority should be on better border security when dealing with illegal immigration rose from 25% to 33%.