The 5.8 million unauthorized immigrants not eligible for deportation relief under President Obama’s executive actions are more likely than those eligible to be unmarried and not have U.S.-born children living with them, according to a new Pew Research Center analysis.

The president’s new and existing programs could shield 48% of the nation’s 11.2 million unauthorized immigrants living in the U.S. from deportation. The executive action announced last month offers three-year work permits and deportation relief to about 4 million unauthorized immigrants, primarily parents who have lived in the U.S. for at least five years and have U.S. citizen or legal resident children. 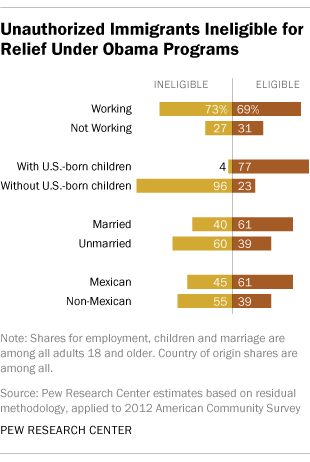 A new Pew Research Center analysis examined the demographic characteristics of those not eligible for the president’s new policy changes. Here’s what we found: