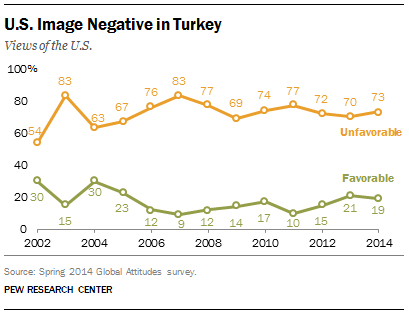 As U.S. and Western-led airstrikes continue to target Islamic State fighters for control of the Syrian-Turkish border town of Kobane, questions have been raised about the U.S. and Turkey’s 60-year alliance. But even prior to the Islamic State’s push there, Turks have held decidedly negative views of the U.S. going back over a decade, and, additionally, do not much like other foreign powers either.

Since we began polling the Turkish people in 2002, shortly after the 9/11 attacks, never have more than three-in-ten said they have a favorable view of the U.S. But anti-Americanism really spiked in the aftermath of the 2003 Iraq War, when 83% of Turks held a negative view of America. Today, only 19% in Turkey like the U.S., while nearly three-quarters (73%) share a dislike of their NATO ally. (Unfortunately, we do not have comparable data for American views of Turkey). 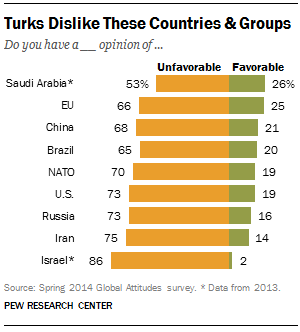 But Turkish distaste for foreign powers does not begin and end with the U.S. On balance, around two-thirds or more Turks express unfavorable views of the European Union, China, Brazil, Russia, Iran and Israel. Turks even dislike Saudi Arabia (53% unfavorable and, notably, the highest favorability percentage (26%) among all countries we asked about). The people of Turkey also hold negative views toward NATO specifically (70% dislike the organization). In fact, it is hard to find any country or organization the Turkish people really like, except, of course, Turkey itself. According to our spring 2012 poll, 78% of Turks said they had a favorable view of their country.

However, along with distaste for foreign allies, Turks also reject extremist groups and their tactics. Although we do not have measurements of Turkish opinion of the Islamic State, 85% in Turkey have a negative opinion of its al Qaeda forbearer, with similarly poor views of other extremist groups like Hamas (80%) and Hezbollah (85%). Additionally, a majority of Turkish Muslims, who comprise 98% of the population, say suicide bombing and other forms of violence against civilian targets are never justified (58%).

Despite the negative inclinations of the Turkish public toward world powers, roughly half the public (53%) in Turkey still wants to join the European Union. And while many in Turkey remain unhappy with national conditions, there has been a substantial increase in overall life satisfaction there since 2002.

Attitudes toward EU are largely positive, both within Europe and outside it
How people around the world see the U.S. and Donald Trump in 10 charts
Turks don’t like their national press much, but rely on it heavily for news
6 charts showing how Russians see their country and the world
Turks With Favorable View of U.S.
Defining generations: Where Millennials end and Generation Z begins
Quiz: Are you a Core Conservative? A Solid Liberal? Or somewhere in between?
Teens, Social Media & Technology
How the Coronavirus Outbreak Has – and Hasn’t – Changed the Way Americans Work
What We Know About Gen Z So Far