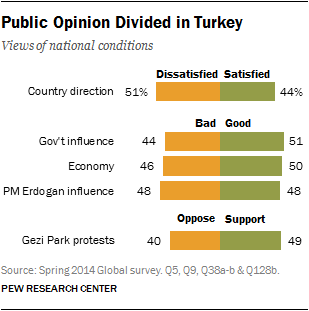 As Turkey prepares to vote for its first ever directly elected president, a new Pew Research Center survey finds the Turkish public is divided over the main contender for the office, current Prime Minister Recep Tayyip Erdogan.

Erdogan and his party, the moderately Islamist Justice and Development Party (AKP), have dominated Turkish politics for the last decade, overseeing considerable economic growth and an expanding role for Turkey in regional and world affairs. And most observers expect Erdogan to win the August 10 election.

But on a number of issues, Turks are almost evenly split between those who are happy with Erdogan’s leadership and the state of the nation, and those who believe the former Istanbul mayor is leading the country down the wrong path. Overall, 44% are satisfied with the country’s direction, while 51% are dissatisfied. Half say the economy is doing well, while 46% think it is in bad shape. Forty-eight percent say Erdogan is having a good influence on the country; the same percentage believes he is having a negative impact.

Many Turks sympathize with the street demonstrations that rocked the country and attracted international attention just over a year ago. A 49% plurality say they supported the anti-government protests that took place throughout Turkey, most prominently in Istanbul’s Gezi Park. And a majority (55%) disapprove of how Erdogan dealt with the demonstrations.

Turkey’s military has long been a major player in the country’s politics – indeed, there have been several military coups since the founding of the Turkish Republic in 1923 – and a 55% majority believes the armed forces are having a good influence on the country. However, this level of support is down sharply from 72% in 2010 and an even higher 85% in 2007.

Another long running theme in Turkish politics is the deep divisions between secular and religious camps in the overwhelmingly Muslim nation, and contemporary Turkish society continues to reflect this divide. For example, highly observant Turkish Muslims are much more likely to support Erdogan, believe the country is on the right track, and oppose last year’s protests.

These are among the key findings from the latest survey of Turkey by the Pew Research Center. Based on face-to-face interviews conducted between April 11 and May 16, 2014, among a representative sample of 1,001 randomly selected adults from across the country, the poll also finds America’s image continues to be overwhelmingly negative in Turkey. Only 19% of Turks express a favorable opinion of the United States. And just 25% have a positive view of the European Union, although Turks, by a 53% to 37% margin, still believe Turkey should join the organization.

Turks are divided on the direction of their country. Roughly half (51%) are dissatisfied with the way things are going in Turkey, while 44% are satisfied. Over the past four years, opinion on this this question has generally been split. However, prior to 2011, the mood in Turkey was much more negative, with clear majorities expressing dissatisfaction with the country’s direction every year from 2002 to 2010. And in 2002, following a severe economic crisis, 93% of the Turkish public was dissatisfied and only 4% satisfied. 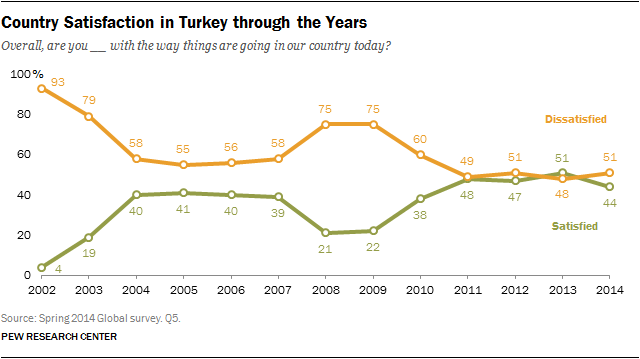 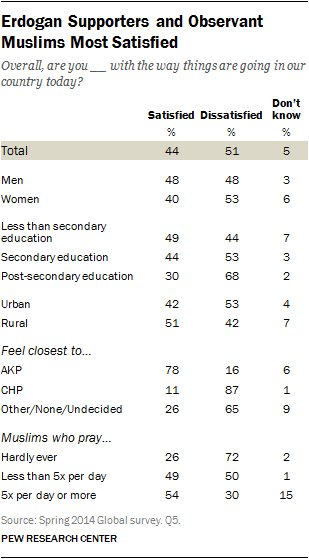 Views of the current state of the nation vary by gender, educational attainment, political affiliation and religious devotion among Turkey’s Muslims (estimated to be around 98% of the population). For example, men are equally divided on the country’s direction (48% are satisfied, 48% are dissatisfied), but only four-in-ten Turkish women feel positively about the way things are going while 53% have a negative outlook.

Some of the biggest divides are based on political party association and frequency of prayer among Muslims. For instance, 78% of Turks who say they feel closest to Erdogan’s moderately Islamist AKP are satisfied with the way things are going in Turkey, while only 11% among supporters of the opposition Republican People’s Party (CHP) feel the same.

Similarly, 54% of Turkish Muslims who pray five times per day or more are satisfied with current national conditions, while only 26% of those that hardly ever pray agree.

Turks are also divided in their evaluations of current economic conditions in their country. Half say the economy is good and a nearly equal 46% say the economy is bad. As with views of the country’s direction overall, the public has been divided over the state of the economy in recent years. Prior to 2011, however, economic ratings were dismal, especially following the 2008-2009 worldwide financial crisis. Furthermore, AKP supporters, rural Turks, and more devout Muslims are generally happier with current economic conditions. 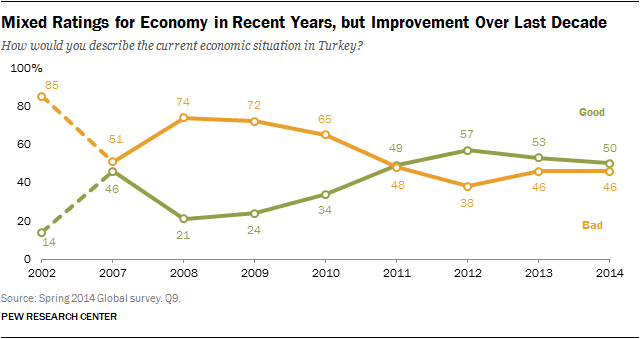 Turks are slightly optimistic about their economic prospects over the next year. Roughly four-in-ten say the economy will improve, three-in-ten say it will get worse, and around a quarter (24%) say economic conditions will remain the same. 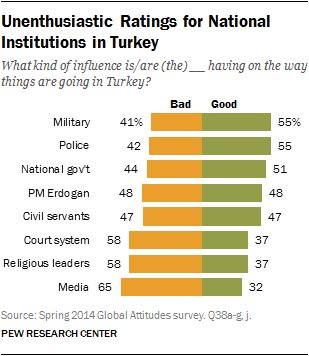 The military and the police are among the highest rated government institutions in Turkey, but even they only achieve bare majority support from the public. Nevertheless, faith in the military is down sharply during the reign of Erdogan, who has taken great pains to diminish the armed force’s role in Turkish politics. 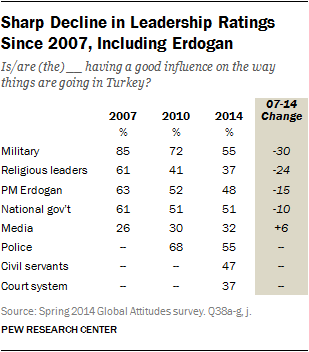 Overall, 55% of the Turkish public says the military is having a good influence on the way things are going in Turkey. An equal number say the same about the police. 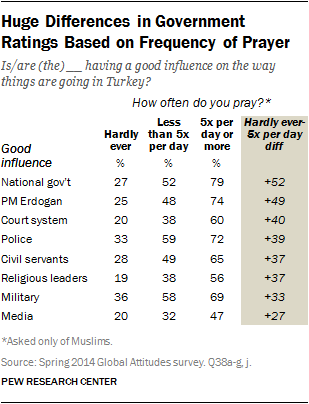 Since 2007, there has been a sharp decline in the ratings of the military, religious leaders, Erdogan, and the national government in general. The drop in military ratings (-30 percentage points) and religious leaders (-24) is particularly dramatic. Additionally, since 2010, ratings for the police have dropped 13 percentage points, with their handling of the 2013 anti-government protests a possible factor. Only 39% of Gezi Park supporters have a positive view of the police.

Views of national institutions are strongly related to frequency of prayer among Turkey’s Muslim population. Those who pray more than five times per day are much more likely to say each national group or institution is a good influence on the country. These differences are greatest on ratings of the national government (+52 percentage points) and Erdogan (+49), but are significant for all institutions included in the poll. 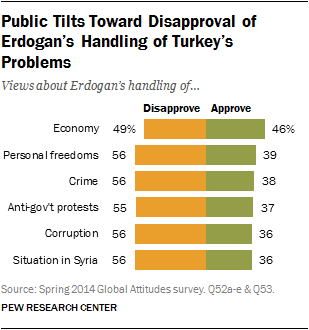 The Turkish public is more divided on Erdogan’s handling of the economy, with 49% saying they disapprove of the prime minister’s economic stewardship and 46% approving. As with other judgments on Erdogan and government influence, Turkish Muslims who are more devout show greater approval of Erdogan’s job performance compared with those who are less religious. 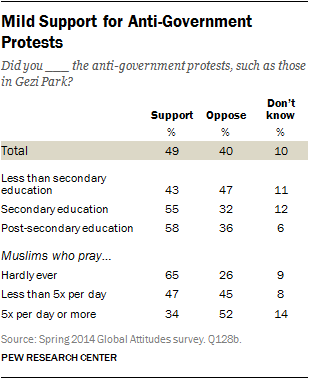 The protests that rocked Istanbul in 2013 as a result of plans to redevelop Gezi Park into an Ottoman-era military barracks that would house a shopping mall and luxury hotels, left a deep impression on the Turkish people and were seen at the time as a black-eye for Erdogan’s international reputation.

About half (49%) say they supported the anti-government protests, such as those in Gezi Park in 2013, but a robust minority (40%) opposed them.

Support for the protests is higher among more educated Turks, those associated with opposition parties and more secular Muslims than it is for less educated Turks, AKP supporters and more devout Muslims. Turks located in the central region of the country (Anatolia) are much less inclined to back the protests of 2013 compared to Turks who live in Istanbul itself, where 70% support the protests.

Erdogan receives low marks for his response to the protests. A majority of Turks (55%) disapprove of his handling of the unrest with 37% approving of his response. Only Erdogan’s most ardent fans, AKP supporters, claim that he did a good job handling the civil disorder (72% approve). 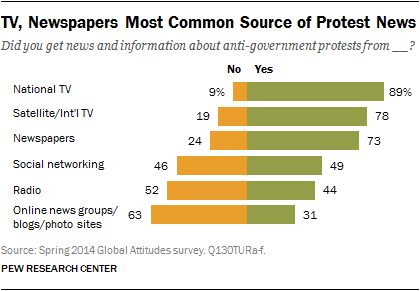 The protests in Turkey were covered extensively in social media, but for the Turkish people, traditional media sources were the most common ways of accessing news about the events. Around nine-in-ten (89%) got information about the protests from national TV, with 78% citing international or satellite TV and 73% utilizing newspapers.

Roughly half (49%) say they accessed social networking sites for news about the protests, with a nearly equal number (46%) saying they did not use these non-traditional sources. Radio was also less popular than TV and newspapers. Only 31% say they obtained information about the protests from online news groups, blogs or photo sites.

While national and international TV were commonly used among all age groups for information about the anti-government unrest, social networking sites were more likely to be utilized among Turkish youth. Seven-in-ten Turks under the age of 30 said they sought news and information about the protests from social networking sites, like Facebook and Twitter. Only 29% among Turks 50 and older said the same. Similarly, 45% of 18-29 year-olds got information from online news groups and photo sharing sites, while only 17% of 50+ year-olds did so.

An overwhelming majority (69%) say that Islam plays a large role in the political life of Turkey, with only 26% saying it plays a small role. Since 2005, six-in-ten or more have said Islam is a major force in Turkish politics. However, in 2002, prior to Erdogan’s election as prime minister, the public was split: 45% said Islam played a large role, while 43% said a small role. 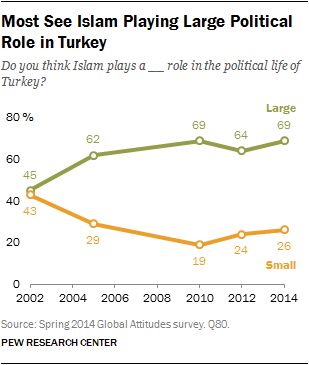 On this particular question, both secular and religious Muslims agree that Islam plays a large role in Turkish political life: Three-quarters of Muslims in Turkey who rarely pray say this is the case, while a nearly equivalent share (73%) of observant Muslims agree. And supporters of both AKP (69%) and CHP (67%) say Islam is a political force in Turkey.

However, belief that Islam plays a big role in politics is more common among males, the young, and among Turks with a post-secondary education. 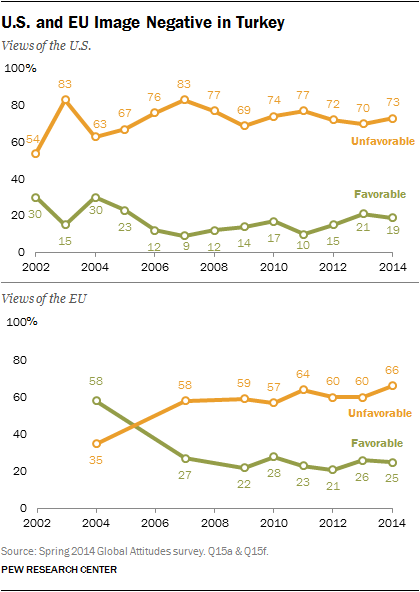 Only around two-in-ten (19%) have a favorable opinion of the U.S., with nearly three-quarters (73%) expressing a negative view of their NATO ally. Opinions of the U.S. have been relatively steady over the past decade, although prior to the 2003 Iraq War, opinions of the U.S. were on balance less negative. 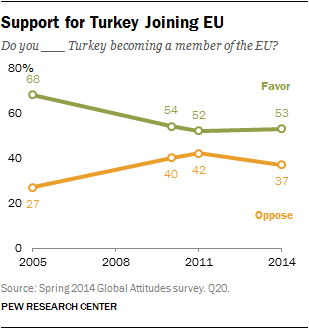 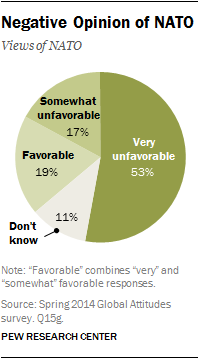 Despite current negative attitudes toward the EU, 53% in Turkey still say they would favor joining the union, while 37% oppose such an action. Since ascension talks began, support for becoming an EU member has fallen among the Turkish public. Back in 2005, as formal negotiations commenced, 68% in Turkey said they would like to join and only 27% opposed membership. In 2010, a much lower 54% favored ascension and 40% opposed it. Since 2010, however, views on this issue have been relatively steady.

Seven-in-ten Turks have a negative opinion of NATO, whose members include most EU countries as well as the U.S. and Canada. Dislike for NATO is particularly intense, with 53% of Turks saying they have a very unfavorable opinion of the treaty organization. Opinions of NATO in Turkey have been consistently low since the question was first asked in 2011, although very unfavorable opinions are up 21 points from last year.

Next: Turkey Survey Methods
← Prev Page
You are reading page1Page2
Next Page →