The Supreme Court’s recent decision not to take up several same-sex marriage cases has led to several more states legalizing gay marriage. And for the first time, much of this expansion of same-sex marriage is occurring in the South – including Virginia, West Virginia and North Carolina – where public support for allowing gays and lesbians to wed is not as great as in other regions.

Our polling data can be further analyzed by dividing each of the four major regions into smaller subregions. For example, in the South Atlantic region – which comprises Florida and Georgia as well as North Carolina, South Carolina, Virginia and West Virginia, four states that either recently legalized gay marriage or are likely to do so soon – respondents in 2014 are divided over same-sex marriage, with 45% in favor and 46% opposed.

Meanwhile, the South Central region – Alabama, Arkansas, Kentucky, Louisiana, Mississippi, Oklahoma, Tennessee and Texas – is the only part of the country where there is still clearly more opposition to gay marriage (50%) than support for it (41%). So far, Oklahoma is the only South Central state where the practice is currently legal, although Kentucky and Tennessee may soon follow, depending on the outcome of a 6th Circuit Court of Appeals ruling, which is expected soon.

In some other areas of the country where same-sex marriage is widely legal, there is overwhelming support for allowing gay and lesbian couples to wed. In New England, where gay marriage first became legal in the United States (in Massachusetts in 2004) and where all six states now allow it, 71% of people support same-sex marriage. And in the states that border the Pacific Ocean (all of which allow gay marriage, assuming a recent court decision applying to Alaska is not overturned), twice as many people favor same-sex marriage (63%) as oppose it (30%). 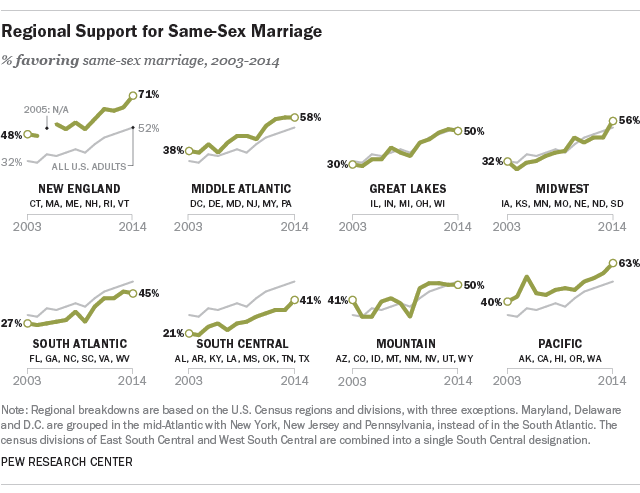 Indeed, even many of those who are against same-sex marriage are resigned to its legality. Last year, we found that most Americans (72%) saw legal recognition of gay marriage as inevitable – including 59% of those who oppose it.