Cubans in the U.S. have long identified with or leaned toward the Republican Party, even as Hispanics overall have tilted Democrat. But the party affiliation of Cubans has undergone a shift over the past decade, according to a Pew Research Center analysis of survey data. 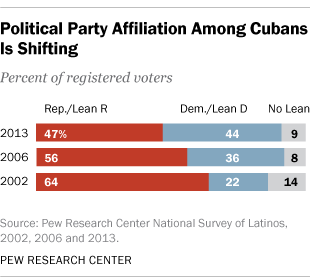 Less than half (47%) of Cuban registered voters nationwide now say they identify with or lean toward the Republican Party—down from the 64% who said the same about the GOP a decade ago, according to 2013 survey data. Meanwhile, the share of Cubans who identify with or lean toward the Democratic Party has doubled from 22% to 44% over the same time period, according to the survey of Hispanics.

The Cuban population in the U.S. is centered in Florida, home to seven-in-ten of the nation’s 2 million Cuban-origin Hispanics. In the 1960s, the state’s Cuban immigrant population boomed as many left the island after Fidel Castro’s rise to power. The concentration of Cuban voters subsequently helped push the overall Hispanic vote toward the Republican Party in the Sunshine State. In 2004, for example, Republican presidential candidate George W. Bush won 78% of the Cuban vote in Florida, compared with 56% of the state’s Hispanics overall.

The shift is partly explained by the coming of age of U.S.-born Cubans, who have somewhat different political affiliations than their elders. Today, 44% of Cubans in the U.S. are native-born. Some 48% of Cubans ages 18 to 49 were born in the U.S., compared with 11% of Cubans who are 50 years and older.

The shift is also partly explained by the different waves of Cuban immigrants who have arrived in the U.S.—more than half of Cuban immigrants arrived after 1990. Between 2000 and 2010, the annual average growth of the Cuban immigrant population was 17,300, according to a Pew Research Center analysis of Census Bureau data.

Among Latinos, those of Cuban origin have had some of the highest voter turnout rates. In 2012, 67% of Cuban Americans voted nationally, compared with 48% of Latinos overall. In the 2012 presidential election, the Cuban vote in Florida was split—49% supported Democrat Barack Obama while 47% supported Republican Mitt Romney, according to the national exit poll. Among all Latinos nationwide, Obama won 71% of the vote, compared with just 27% for Romney.

Surge in Cuban immigration to U.S. continued through 2016

Unlike other Latinos, about half of Cuban voters in Florida backed Trump

As Cuban American demographics change, so do views of Cuba