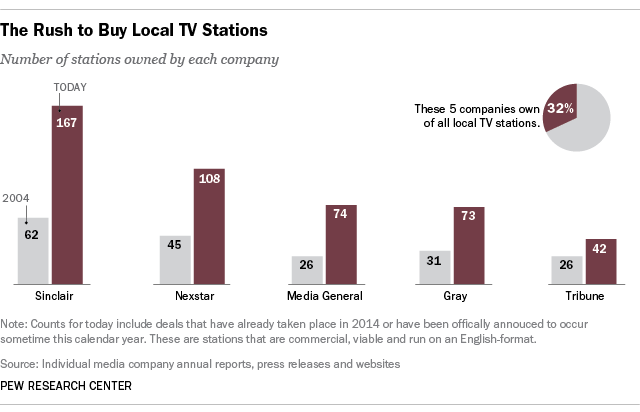 Some analysts say the Aereo TV case now before the U.S. Supreme Court could have disastrous consequences for local TV stations if the justices allow the company to capture broadcast programming without paying content producers. The New York Times’ David Carr warned, that in one such scenario, “companies that own large groups of local stations like the Tribune Company and the Sinclair Broadcast Group would suddenly find themselves in possession of a much diminished collection of assets.”

If that potential threat looms, it hasn’t slowed these media companies from dramatically expanding their local television holdings in recent years. A decade ago, the number of stations owned by what are now the five largest local TV companies was 190. Today, that number is 464. In 2013, alone, about 300 full-power local TV stations changed hands, at a cost of more than $8 billion. That is 195 more stations sold than in 2012 and more than four times the dollar value of the deals made in 2012.

The FCC recently tightened its rules concerning ownership of multiple stations in the same market. But, much consolidation has already occurred. As of today, five companies own one-third of the about 1,400 local TV stations in the country. Here’s how they amassed their local television empires, while in some cases, unloading their newspaper holdings—a sure sign that Aereo or not, local television is considered a far healthier business than the newspaper industry.