Last week’s Supreme Court decision to strike down limits on overall campaign contributions by individuals landed on front pages across the country, but the public was paying attention to other stories. 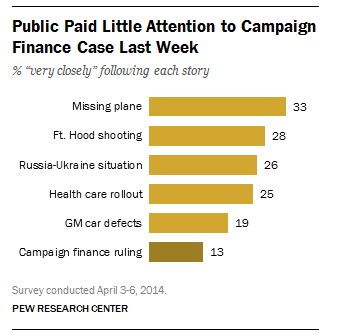 Just 13% of American adults say they followed the campaign finance story “very closely” last week, according to a new Pew Research Center survey. Roughly half (49%) say they followed the story “not at all closely,” which is the category in the survey that represents the lowest level of interest.

In part, the lack of attention might be related to the fact that there were other big stories dominating the news last week. Four weeks in, one-third of the country (33%) was still paying very close attention to the missing Malaysia Airlines plane. In addition, about one-quarter very closely followed the shooting at Fort Hood, the situation between Russia and Ukraine and the health care rollout, which had just passed its March 31 deadline to sign up for coverage.

But it’s also likely that the public paid low attention to the case because campaign finance rarely captures people’s news interest. The landmark 2010 Citizens United case grabbed the attention of just 18% of Americans, while 2003’s McConnell vs. FEC – which largely upheld the McCain-Feingold Act – registered strongly with only 8% of the public. 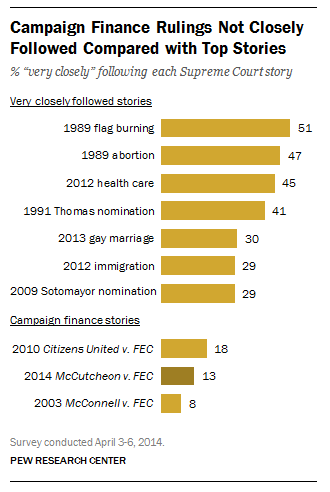 We asked the public about two weeks after Citizens United how much they had read or heard about “the Supreme Court’s decision on campaign finance rules that now allows corporations to spend on behalf of candidates in elections.” About two-in-ten (19%) said “a lot,” just under half (46%) said a little and 35% had heard nothing about the ruling.

Large shares of Americans have also paid attention when it comes to cases about flag burning, abortion, and the 2002 lower court ruling that “One nation, under God” could not be included in the Pledge of Allegiance (the latter was closely followed by 52%). About four-in-ten (41%) closely followed the salacious 1991 confirmation hearing of Justice Clarence Thomas.

By some measures, the workings of the Supreme Court remain opaque to the public. Over the years, Pew Research has conducted several surveys about the public’s knowledge of the Supreme Court. In a Pew Research survey conducted last August, online respondents were asked to select the justice who had most often been the swing vote in closely divided court cases recently. When shown the pictures and names of four different justices, only 28% correctly chose Anthony Kennedy as the swing vote.

Likewise, just 34% correctly identified John Roberts as Chief Justice out of a list of four names in August 2012. However, looking back at perhaps the most famous case in modern Supreme Court history, 1973’s Roe v. Wade, a 62% majority of Americans knew that the case dealt with abortion, according to our survey conducted in Jan. 2013. Predictably, knowledge of all these questions has correlated strongly with education.

After the high-profile rulings last June on same-sex marriage and the Voting Rights Act, the public showed different degrees of knowledge about what the rulings meant. Two-thirds (67%) knew that the court ruled states could determine whether same-sex couples could marry.  But when it came to the voting rights decision,  just one-third correctly stated that the court had overturned parts of the Voting Rights Act. The year before, 55% of the public correctly said the Supreme Court upheld most of the provisions of the Affordable Care Act.

To increase the visibility of Supreme Court proceedings, some have proposed changing the current standard that prohibits TV cameras from oral arguments. About six-in-ten (61%) of the public would favor that change while 35% said the Supreme Court should continue to bar TV cameras, according to a March 2012 CNN/ORC poll.