The latest Pew Research Center News IQ quiz measures the public’s knowledge of current affairs with several different question formats, including graphs, charts and pictures. (Take the quiz yourself before reading this report, by clicking here.)

A substantial majority of Americans (77%) are able to correctly identify Edward Snowden from a photograph of the former government contractor who leaked classified information about the NSA. Nearly as many (74%) know that the Federal Reserve is primarily responsible for monetary policy and not tax, trade or energy policy.

Other questions are more challenging. The most difficult question on the quiz asks respondents to identify the trend in the stock market since 2008 from four charts. Just (21%) correctly select the chart showing a steep drop in the Dow from 2008 to 2009, followed by a gradual and steady recovery.

Another question presents the pictures and names of four Supreme Court justices and asks respondents to identify the justice who has most often been the court’s swing vote in recent years; just 28% select the picture of Justice Anthony Kennedy. Previous news quizzes also have shown that the public is not knowledgeable about the Supreme Court and its members

Past News IQ surveys have often found young people to be less knowledgeable than older people about current events, but in the current poll the results are more mixed. 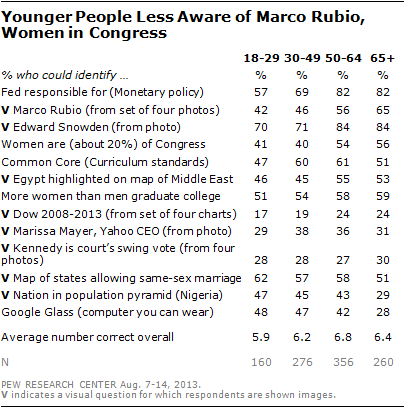 Older people struggled with a question that showed a country’s population pyramid – a graphic of the relative size of age groups in a population. The country depicted has a substantial youth population and fewer older people. Just 29% of those 65 and older correctly selected Nigeria (from a list of four countries) as the country represented by the pyramid. That compares with at least four-in-ten among younger groups.

Younger adults fared worse than older people on some political questions. Only about four-in-ten (42%) of those younger than 30 and 46% of those 30-49 could identify Marco Rubio as a U.S. senator from Florida from a group of four prominent Hispanics whose pictures and names were shown. Majorities of older Americans correctly select Rubio’s photograph. Younger people also are less likely to know that women currently hold about 20% of the seats in Congress. 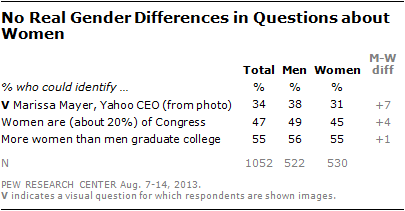 There are no significant differences between women and men on the three quiz questions about women. Comparable majorities of women (55%) and men (56%) know that more women than men graduate from college with bachelor’s degrees. Similarly, 45% of women and 49% of men know that women make up about one-fifth of the members of Congress.

A question about Marissa Mayer, the CEO of Yahoo, proved difficult for both women and men. A photograph of Mayer was shown and respondents were asked to identify the person pictured. Just 31% of women and 38% of men chose Mayer from a list of prominent women.

As with previous knowledge tests, college graduates are more likely than those with a high school degree or less to answer every question correctly. About eight in-ten of those with at least a college degree (78%) correctly identify the term “Common Core” as a set of school curriculum standards in language and math. Just half as many (39%) of those with no college experience answered this question correctly. 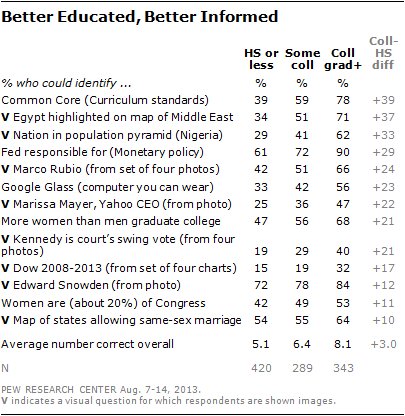 Educational differences are more modest when it comes to awareness of Edward Snowden and the states that allow same-sex marriage. 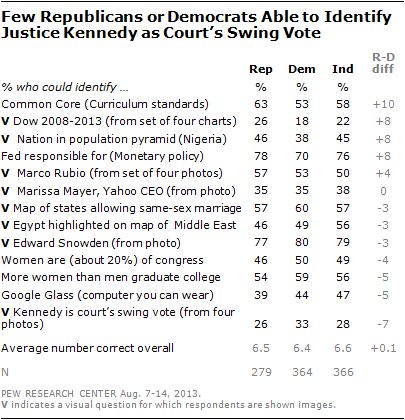 Republicans (63%) are more likely than Democrats (53%) to know that the Common Core refers to curriculum standards in language and math.

But there are only slight partisan differences on most other questions. Republicans and Democrats are about equally unfamiliar with who on the Supreme Court is most often the swing vote in closely divided cases. Just 33% of Democrats and 26% of Republicans correctly select Justice Anthony Kennedy. Republicans are about as likely to say that Antonin Scalia (21%) or Clarence Thomas (20%) often serve as the court’s swing vote.