The latest update of the Pew Research Center’s regular News IQ quiz uses a set of 13 pictures, maps, graphs and symbols to test knowledge of current affairs. (To take the quiz yourself before reading this report, click here.) At the high end, nearly nine-in-ten Americans (87%) are able to select the Star of David as the symbol of Judaism from a group of pictures of religious symbols. And when shown a picture of Twitter’s corporate logo, 79% correctly associate the logo with that company. 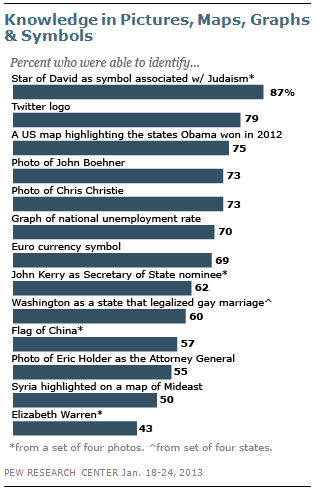 At the low end, just 43% are able to identify a picture of Elizabeth Warren’s from a group of four photographs of female politicians, among them Nancy Pelosi, Tammy Baldwin and Deb Fischer. And when presented with a map of the Middle East in which Syria is highlighted, only half are able to identify the nation correctly.

Overall, majorities correctly answer 11 of 13 questions in the new quiz, which was conducted online January 18-24, 2013, among a random sample of 1,041 adults by the Pew Research Center for the People & the Press.

The quiz includes several items about leading political figures. When shown a picture of New Jersey Gov. Chris Christie, 73% identified Christie from a list that included Newt Gingrich, Scott Walker and Rush Limbaugh. An identical percentage identified John Boehner in a question with a similar format. To see how each question was presented, see the attached survey topline.

Seven of the 13 items were answered correctly by two-thirds or more of the survey’s respondents. These included identifying the Star of David as the symbol for Judaism (87%), the corporate logo for Twitter (79%), the map of states won in 2012 by President Obama (75%), the photos of Christie and Boehner (73% each), a graph of the unemployment rate (70%) and the symbol for the Euro (69%).

About six-in-ten (62%) could identify the new secretary of state, John Kerry, from a photo lineup of four people. When shown a list of four state maps, and asked which of the states had approved the legalization of same-sex marriage last year, 60% correctly chose the state of Washington. But just 50% were able to identify Syria as country highlighted on a map of the Middle East.

On average, quiz takers correctly answered 8.5 of the 13 questions, a score of 65% correct when graded like a classroom test. 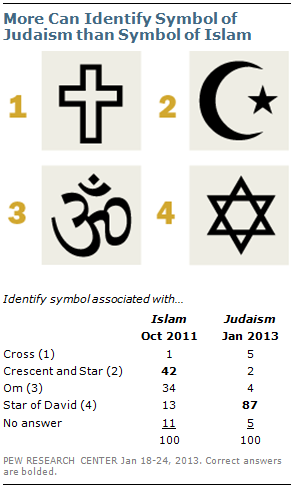 The question about religious symbols was modeled on one asked previously in Oct. 2011. In the current survey, four symbols were shown and respondents were asked to identify the one associated with Judaism: 87% correctly selected the Star of David.

In the current quiz, the map identification question about Syria also was modeled on a question in the 2011 survey: 50% correctly identified Syria as the country highlighted 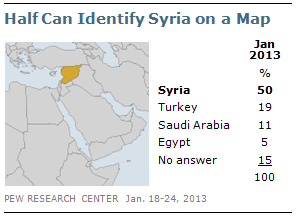 on a map of the Middle East from a list of four countries (Turkey, Saudi Arabia and Egypt were the others). In Oct. 2011, Israel was the country highlighted on a map; 57% correctly identified it from a list that had the same alternatives as the current survey. 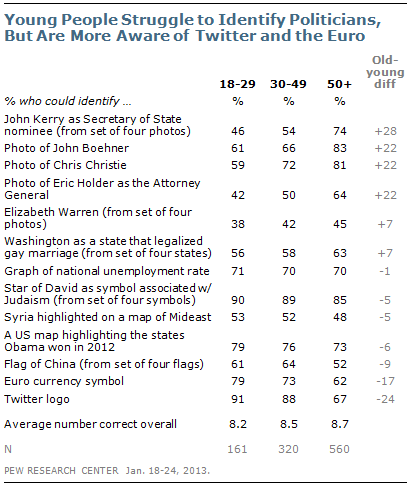 Younger people typically score lower than older people on tests of political knowledge. That is true for some questions in the current survey, especially those that required an identification of public officials from their pictures. For example, just 46% of those younger than 30 were able to identify John Kerry from his picture as the nominee for secretary of State (the survey was conducted before Kerry was confirmed by the Senate on Jan. 29). Among those 50 and older, 74% chose Kerry’s picture from a group of photos.

Young people also were less likely to identify Christie and Boehner from their photos than were those 50 and older.

However, as many people under 30 as 50 and older knew that a map with highlighted states showed those that Obama won in 2012.

And about nine-in-ten young people (91%) could identify Twitter’s corporate logo; only 67% of those 50 and older could do so. Similarly, 79% of the youngest group recognized the symbol for the Euro, compared with 62% among those 50 and older. 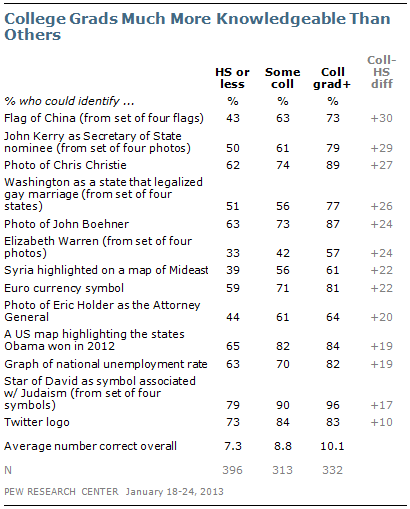 The largest group differences in knowledge are found between individuals with lesser and greater levels of education. Respondents with no more than a high school education were less likely than college graduates to answer every question correctly.

Those with a high school education could correctly answer an average of 7.3 questions, compared with 10.1 correct among college graduates. The median gap in percent correct between the low and high education groups is 22 points. 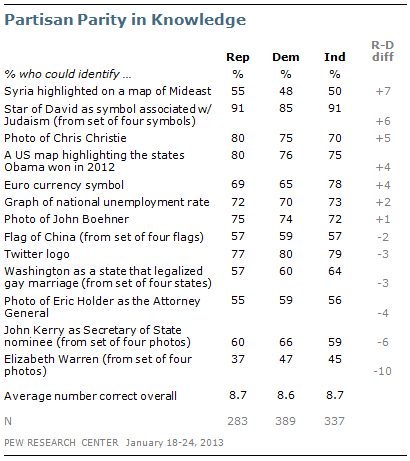 Democrats (47%) were more likely than Republicans (37%) to recognize a photo of Elizabeth Warren, the new senator from Massachusetts. Other partisan differences were very small.