Before you read the report, test your own News IQ by taking the interactive knowledge quiz. The short quiz includes many of the questions that were included in a national poll. Participants will instantly learn how they did on the quiz in comparison with the voting public as well as with people like them.

As the presidential campaign enters its final three months, most voters say they already know what they need to know to form a clear impression of the candidates. But fewer say this about Mitt Romney than about Barack Obama.1 Indeed, the latest Pew Research Center knowledge survey finds that while voters know many key things about the candidates and their issue positions, voters are less familiar with Romney than with Obama. 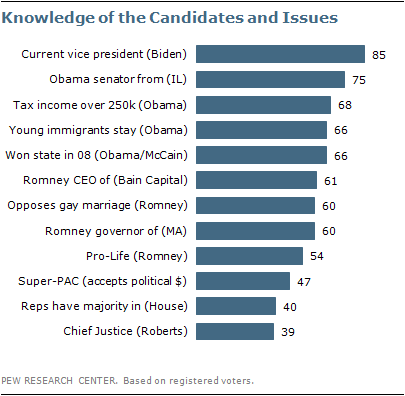 Three-quarters of voters (75%) can correctly identify Illinois as the state Obama represented in the U.S. Senate, while 60% identify Massachusetts as the state in which Romney served as governor. Roughly six-in-ten (61%) know that Bain Capital is the company Romney once headed.

About two-thirds correctly identify Obama as the candidate who supports tax increases on income above $250,000 (68%), as well as a policy to allow young undocumented immigrants who were brought to the U.S. as children to remain here and apply for work permits (66%). Somewhat fewer identify Romney as the candidate who opposes same-sex marriage (60%) and who supports restricting access to abortion in most cases (54%).

The latest News IQ survey by the Pew Research Center for the People & the Press, conducted July 26-29 among 1,010 adults (including 771 registered voters), finds voters to be somewhat less knowledgeable about political facts not related to the candidates. Just under half of voters (47%) can correctly identify a “Super PAC” as a group able to accept unlimited political donations. And only 40% can correctly state that the Republican Party currently has a majority of the seats in the U.S. House of Representatives. However, including those who believe that the GOP has a majority in the Senate or in both houses, 63% are aware that the party has at least a share of the power in Congress.

Awareness that Joe Biden is the vice president of the U.S. is nearly universal among voters (85%). But just 39% can correctly identify John Roberts as the current Chief Justice of the U.S. 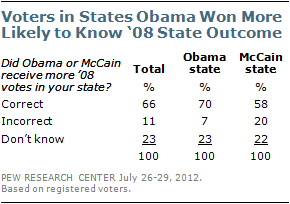 Knowledge Differences between Voters and Non-Voters 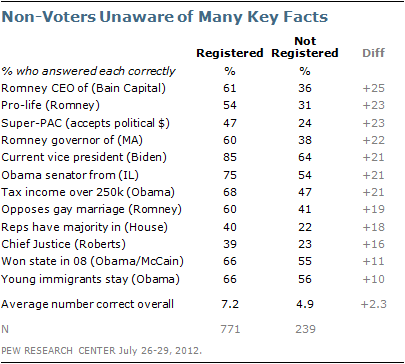 Non-voters struggle with many of the campaign and other political knowledge questions. On average, people who are not registered to vote answer 4.9 out of 12 questions correctly compared with 7.2 among voters. Just 22% of non-voters know that Republicans control the House of Representatives and only 23% know that John Roberts is the Chief Justice of the U.S. On all twelve questions asked, voters are significantly more likely than non-voters to answer correctly. 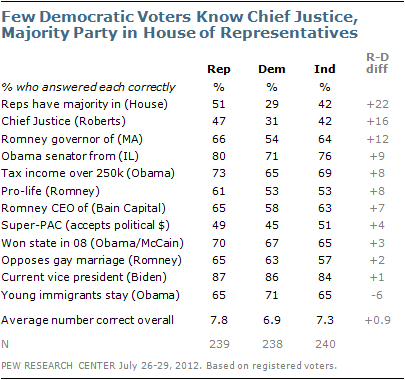 On average, Republican voters fare somewhat better than Democratic voters (7.8 vs. 6.9 questions correct) on the twelve question knowledge quiz. Democratic voters struggle to identify the Republican Party as the majority in the House of Representatives (29% correct) and John Roberts as the U.S. Chief Justice (31%).

On most other questions, however, there are relatively modest differences between Republican and Democratic voters. Majorities of Republicans, Democrats and independents know campaign facts such as that Romney was the CEO at Bain Capital and Obama supports taxing income over $250,000. Wide majorities of partisan groups also know that Obama favors allowing many illegal immigrants who were brought to the U.S. as children to stay in the country, and that Romney opposes allowing gays and lesbians to marry legally. 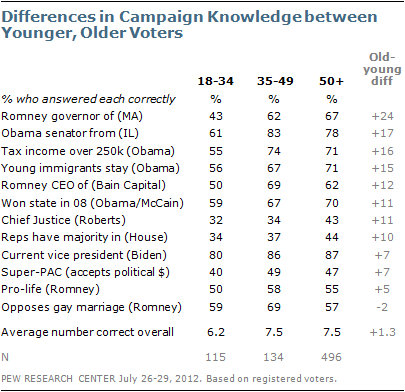 Fewer than half of voters with only a high school education can answer key facts about Mitt Romney’s background, including the company where he was CEO, the state he governed, and his position on abortion. Voters with no college experience generally do somewhat better on questions about Obama’s positions and background. For example, 62% know he supports allowing many illegal immigrants who were brought to the U.S. as children to stay in the country. And 58% know that he represented Illinois in the U.S. Senate.

In general, older voters are better informed about the election than are voters under the age of 35. This is consistent with the findings of previous knowledge surveys, but the gap between young and old voters is much more modest than the one seen across educational levels. Young voters are about as likely as older voters to know that Mitt Romney is pro-life and that he opposes gay marriage; 80% can correctly identify Joe Biden as the current vice president. Young voters trail older voters when it comes to questions such as the state Obama represented in the Senate and which candidate supports taxing income over $250,000. Nonetheless, half or more of voters under age 35 are able to answer eight of the 12 questions correctly.