The Olympic Winter Games in Sochi have shone a spotlight on the status of gays and lesbians in Russia. In particular, attention has focused on the anti-homosexual “propaganda” law, which was approved by the Russian parliament in a 436-0 vote last June. While President Vladimir Putin has defended the legislation as non-discriminatory, the measure has generated a significant backlash among Western countries and Olympic athletes.

But when it comes to public opinion in Russia, newly released data from a 2013 Pew Research Center survey suggests a similar reaction is unlikely: nearly three-quarters of the Russian population (72%) think that homosexuality is morally unacceptable, with only 18% saying it is acceptable or not a moral issue. In Russia, homosexuality tops the list of unacceptable behaviors even in comparison to other controversial issues, such as abortion and alcohol consumption. In fact, extramarital affairs (69% unacceptable) and gambling (62%) are the only other issues tested that are frowned upon by a majority of the Russian people. 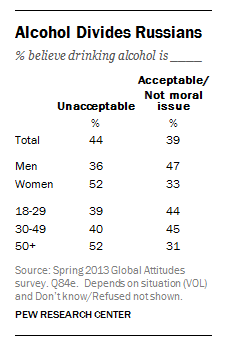 Russians generally agree that extramarital affairs and gambling are also unacceptable, but they are more divided when it comes to abortion and alcohol usage. Both are seen a morally unacceptable by 44% of the population, but 35% and 39% respectively say these are acceptable or are not a moral issue.

There is a stark gender and age divide on attitudes toward drinking which has long been an issue troubling Russian society. About half of Russian women (52%) say drinking alcohol is morally wrong, but only 36% of Russian men agree. And 52% of Russians over the age of 50 also say drinking is morally unacceptable, while only 39% of those under 30 say the same. A recent study published in The Lancet medical journal reinforces evidence “that vodka is a major cause of the high risk of premature death in Russian adults,” and a quarter of Russian men die before they are 55, mostly due to alcohol.

On the issues of premarital sex, divorce, and contraceptives, Russians are on balance accepting of these practices. Four-in-ten say sex between unmarried adults is an acceptable moral practice, while 46% agree that divorce is morally acceptable. And a 62%-majority think contraceptive use is proper, with only 7% saying that using a contraceptive is a morally unacceptable action.

Note: This data will be published in a forthcoming report that looks at global attitudes towards morality more broadly. The topline for this data can be found here.

Most Americans have negative view of Putin as Sochi games begin

Public Skeptical of Decision to Hold Olympic Games in Russia