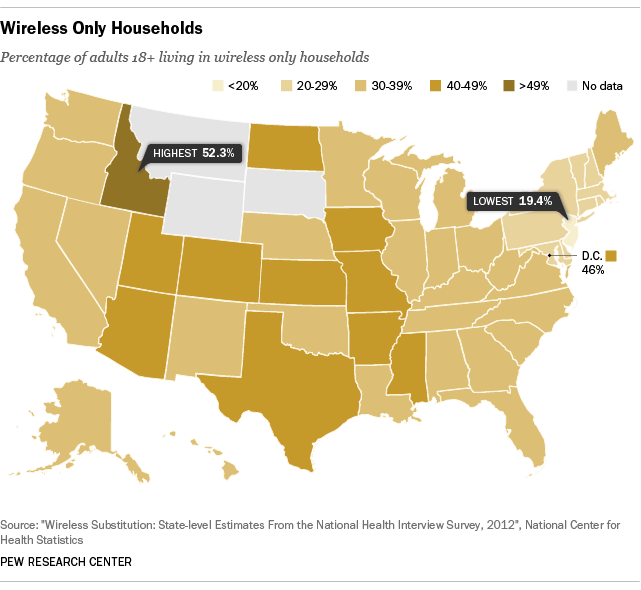 The state where people most rely on their cellphones isn’t, as you might think, a busy metropolis (like New York) or a city crowded with texting college students (like Boston). It’s scenic, sparsely populated Idaho, where as of last year more than half (52.3%) of adults lived in households that had cut the landline-phone cord completely.

The patterns are similar when the analysis is expanded to include households that have a landline phone but receive most calls on cellphones. Largely rural states in the West and South have the highest shares of such “wireless-primary” households, while the lowest wireless-primary shares are clustered in the Northeast.

Overall, according to a separate CDC report, two in every five American homes (39.4%) had only wireless phones as of the first half of 2013. About 38% of U.S. adults (or 90 million) and 45.4% of U.S. children (33 million) lived in wireless-only households. The wireless-only share has been rising steadily ever since the CDC began asking people about their phone status: Just three years ago only 26.6% of U.S. households were wireless-only.

The wireless-only lifestyle is especially predominant among the poor and the young. According to the CDC, nearly two-thirds (65.6%) of adults ages 25-29 lived in households with only wireless phones, as did three-in-five (59.9%) 30- to 34-year-olds and a majority (54.3%) of adults ages 18-24. A majority of adults living in poverty (54.7%) lived in a wireless-only household, versus 47.5% of what the CDC calls the “near-poor” and 35.3% of non-poor adults; wireless-only households also predominate among Hispanics, renters and adults living with roommates. (Some of those categories overlap, of course.)

Young adults who grew up with cellphones may never have had a landline to give up, industry analysts say, while poor people may cut the cord on a seldom-used landline phone to save money. (As Bloomberg News notes, federal subsidies encourage low-cost and no-contract providers to give phones to low-income people.) As fewer people use traditional landlines, phone companies have become more reluctant to maintain their traditional switched networks; the resulting degradation of call quality, in turn, can lead even more people to switch.

The CDC data are paralleled by Pew Research Center findings on people who use their phones to go online. A 2013 survey found, for example, that overall 34% of those “cell internet users” go online mostly using their phones, but the “cell-mostly” share rises to 45% among the lowest-income people, 50% among people ages 18 to 29, and 60% among Hispanics.

The demographic and geographic differences between wireless-only and landline households pose a particular statistical challenge for survey researchers, who have to make sure that their samples of both groups are adequately represented and properly weighted in their analyses.

CDC: Two of every five U.S. households have only wireless phones
Key findings: How living arrangements vary by religious affiliation around the world
The demographics and politics of gun-owning households
7 key findings on the state of the middle class in Western Europe
The American middle class is stable in size, but losing ground financially to upper-income families